Statista recently released a new chart to highlight the massive shift in the global mobile operating system market from 2010 through 2017 and the changes represented have been dramatic, to say the least. Of course, the first touchscreen-enabled device, the IBM Simon, first released in 1992. That device and most subsequent devices leading up to the initial boom in the industry were primarily PDAs. The first iPhone launched in 2007, meanwhile, followed closely by Android in 2008 – with HTC’s G1. 2010 effectively represents a period where the market had begun to truly be competitive. At that point, Android and iOS collectively held 38.4-percent of the overall market. The former had a lead by 7-percent, whereas BlackBerry was managing to maintain around 16-percent of the market and Windows Phone held 4.2-percent. The rest of the market, 41.5-percent, was held by other third-party efforts from OEMs such as Nokia’s Symbian.

Over the course of the next seven years, Android would prove the dominant force, led by waves of manufacturers striving to create unique experiences based on a common framework and features. It goes without saying that the biggest names in mobile today are Apple, Samsung, Huawei, Xiaomi, and OPPO. While Apple still led the pack in 2017, iOS only captured 14-percent of the world market share for smartphones. New BlackBerry and Windows Phone had gone away completely, as have countless other operating systems. That comes down mostly to those companies refocusing efforts on working with Android. For 2017, Google’s OS held a staggering 85.9-percent of the world market in smartphones, leaving just 0.1-percent for the rest. Behind those figures, the number of smartphone users has increased substantially. In 2010, approximately 297 million smartphones were sold globally. That’s relatively paltry compared to last year’s 1.537 billion.

2017’s fourth quarter also saw the world’s first overall drop in smartphone sales. Year-over-year sales fell 5.6-percent. That’s a small drop when compared to the overall upward trend for 2017 but it seems to indicate that the trend won’t continue indefinitely. Some market analysts have predicted the approach of a plateau due to market saturation. Android seems to be maintaining its foothold, for now. But the company behind the OS is going to need to keep innovating if it wants to maintain dominance. With all of that said, at very least, it should be interesting to see where this all goes in another 7 years. 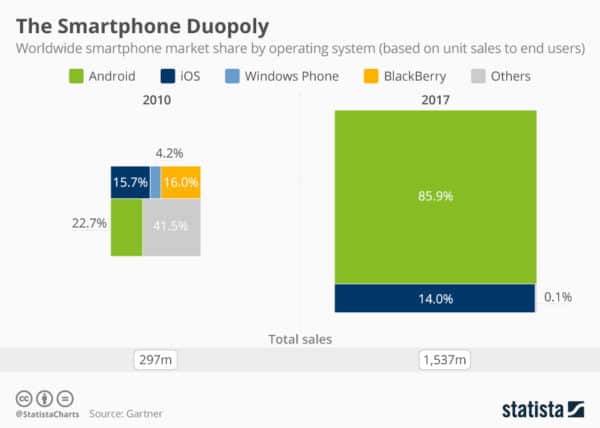