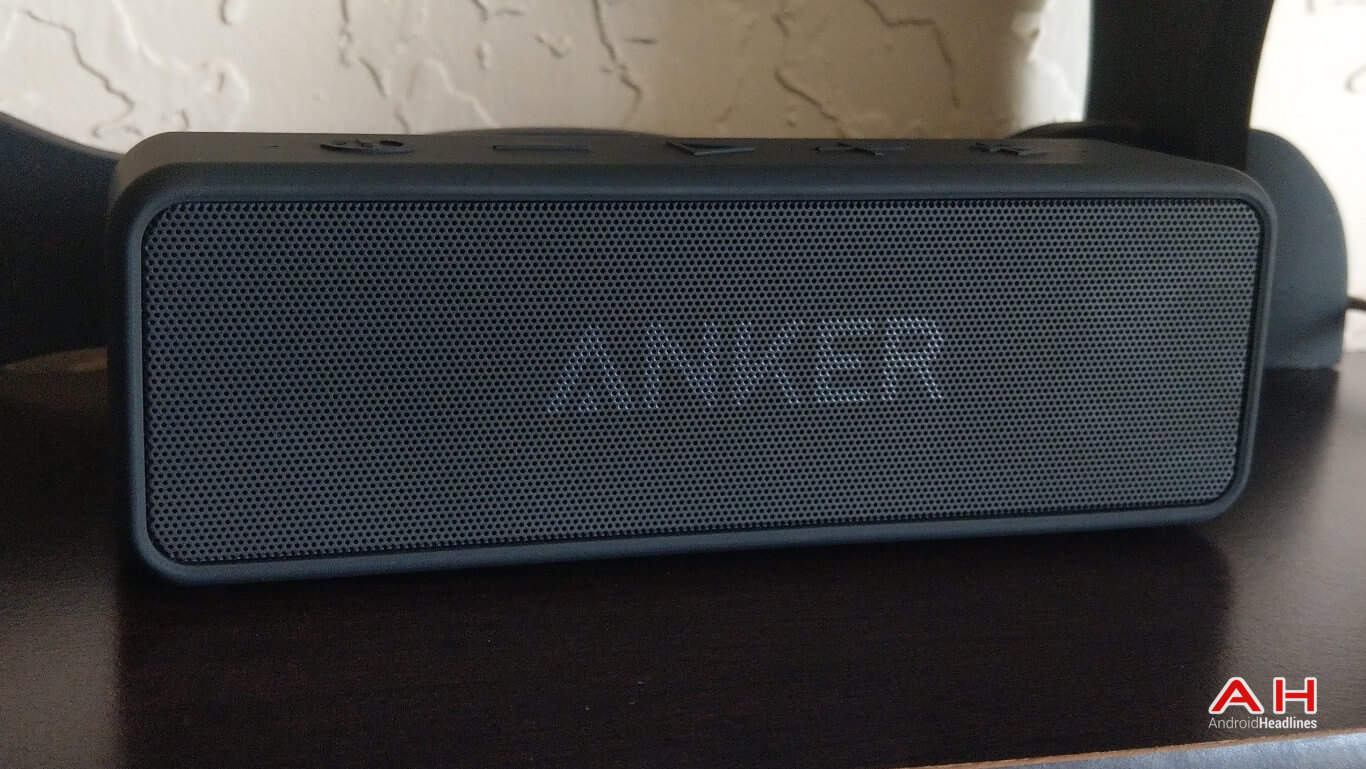 The SoundCore 2 is portable and capable, with few caveats to speak of.

ANKER may be best known as an aftermarket supplier of high-quality chargers, portable power banks, and OTG cables but those are hardly the only substantial investments in mobile accessories that the company has made. That’s something that quickly became apparent when taking an in-depth look at the company’s latest efforts in the portable audio arena. The SoundCore 2 is certainly not the most expensive Bluetooth speaker on the market in the small form-factor. At just under $40 for the matte black variant and just over $40 – on Amazon – for the blue or red versions, it would be easy for serious audio enthusiasts to overlook. However, its clarity, volume, aesthetics, and moderate ruggedization arguably place the SoundCore 2 well above its purchase price. That’s without consideration for its long battery life or effective range. At the speaker’s price, it isn’t necessarily going to fit into any category associated with the term “audiophile.” That doesn’t mean it isn’t well worth checking out for anybody in the market for a Bluetooth speaker. 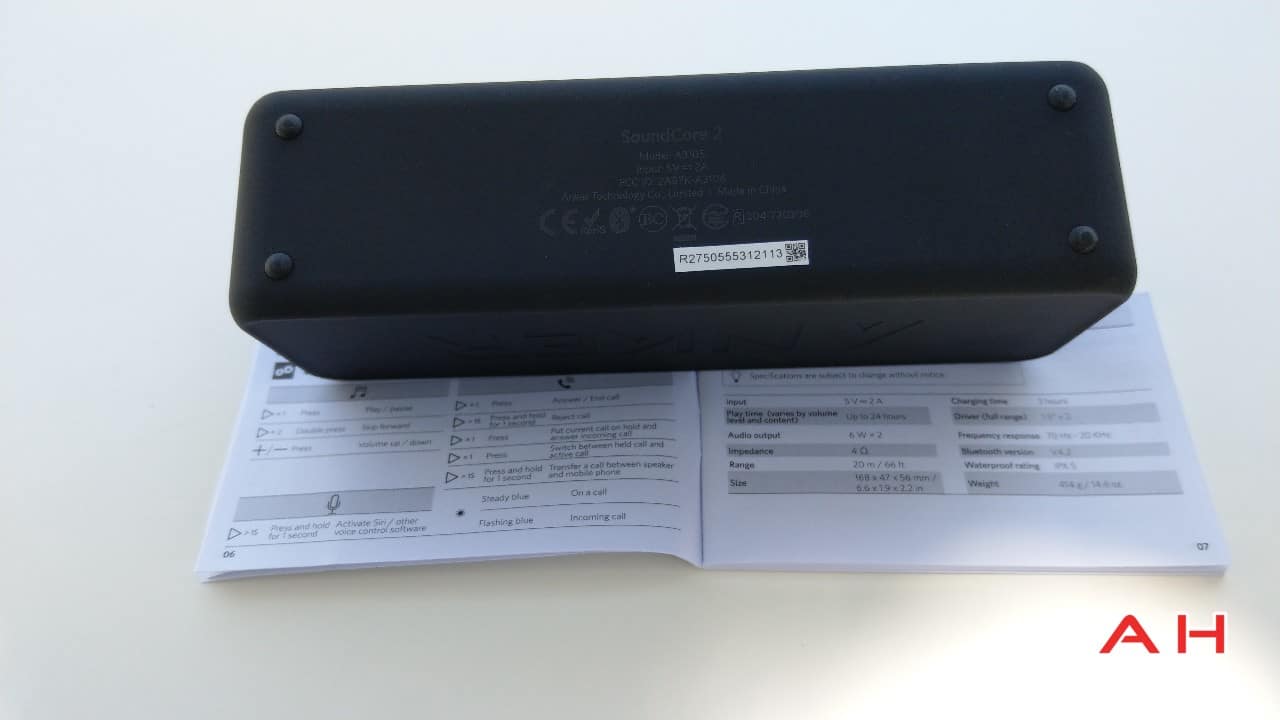 Breaking down the technical specifications of the ANKER SoundCore 2, there is nothing to complain about. This box-style speaker features dual 1.5-inch 6W drivers totaling output to 12W, with a respectable frequency response range of 70Hz to 20KHz. A resistance of just 4 ohms and ANKER’s patented spiral bass port boost, coupled with the company’s BassUp technology ensures balanced clarity regardless of how low the tones go. That hardware is driven by a whopping 5,200mAh battery which charges at a fairly standard 5V/2A. All of that hardware is packed into a rectangular box comprised of soft TPU-like material on three sides and a metal speaker grill at the front. Far beyond looking sleek, that case and other built-in features provide ruggedization rated at IPX5. ANKER says that’s good for protection against rain, snow, dust, and splashes. The speaker itself measures 6.6 x 1.9 x 2.2 inches and tips the scales at just 414g, providing a solid feel on top of the weatherproofing. Connectivity is available via 3.5mm auxiliary cable or Bluetooth 4.2. 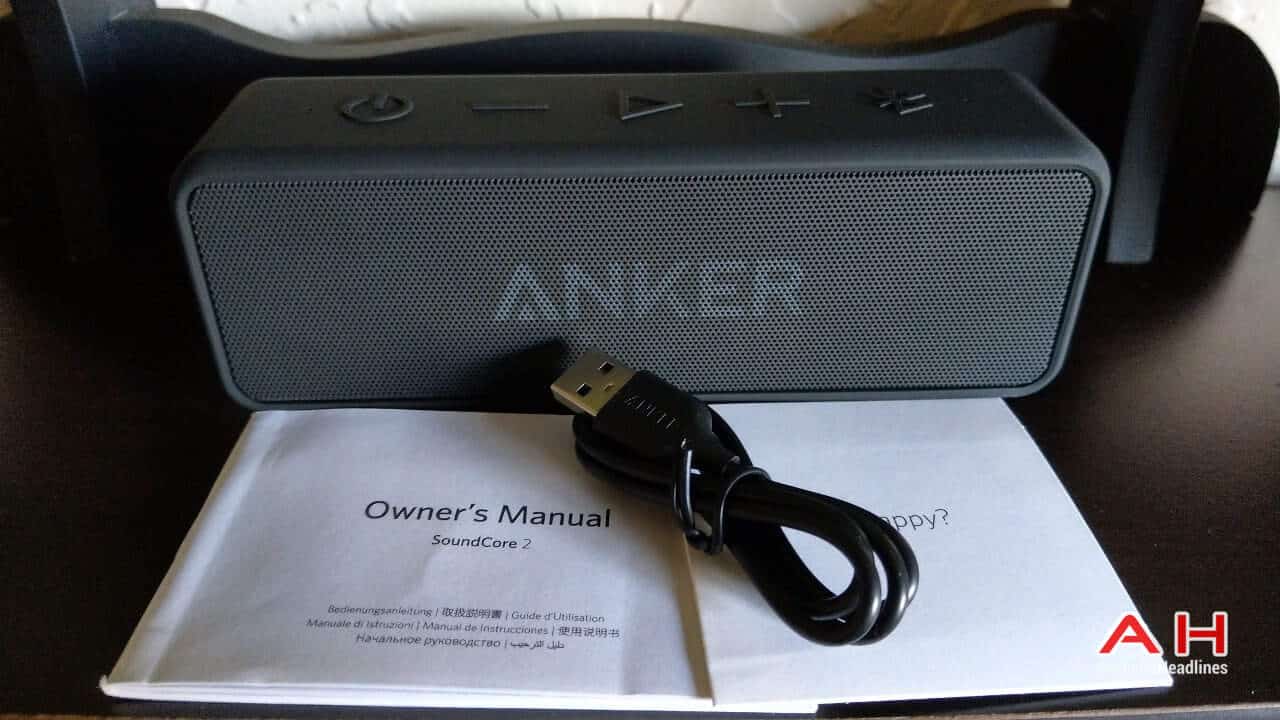 Opening up the box reveals the speaker itself, carefully packaged in a protective bag, alongside very few adornments. In fact, aside from a fairly straightforward user manual and ANKER’s trademark customer care card, there’s not much there to speak about. A second box embedded in the inner liner contains an ANKER-branded micro USB cable. That measures around 2-feet in length. It is worth pointing out that, as is often the case with accessories, there’s no wall adapter included in the package. That’s nothing unusual and definitely not a dealbreaker but is worth noting. A huge variety of devices charge via a USB wall adapter rated at 5V/2A, as are many portable battery banks. So chances are, users are going to have a way to charge this speaker up without too much hassle. 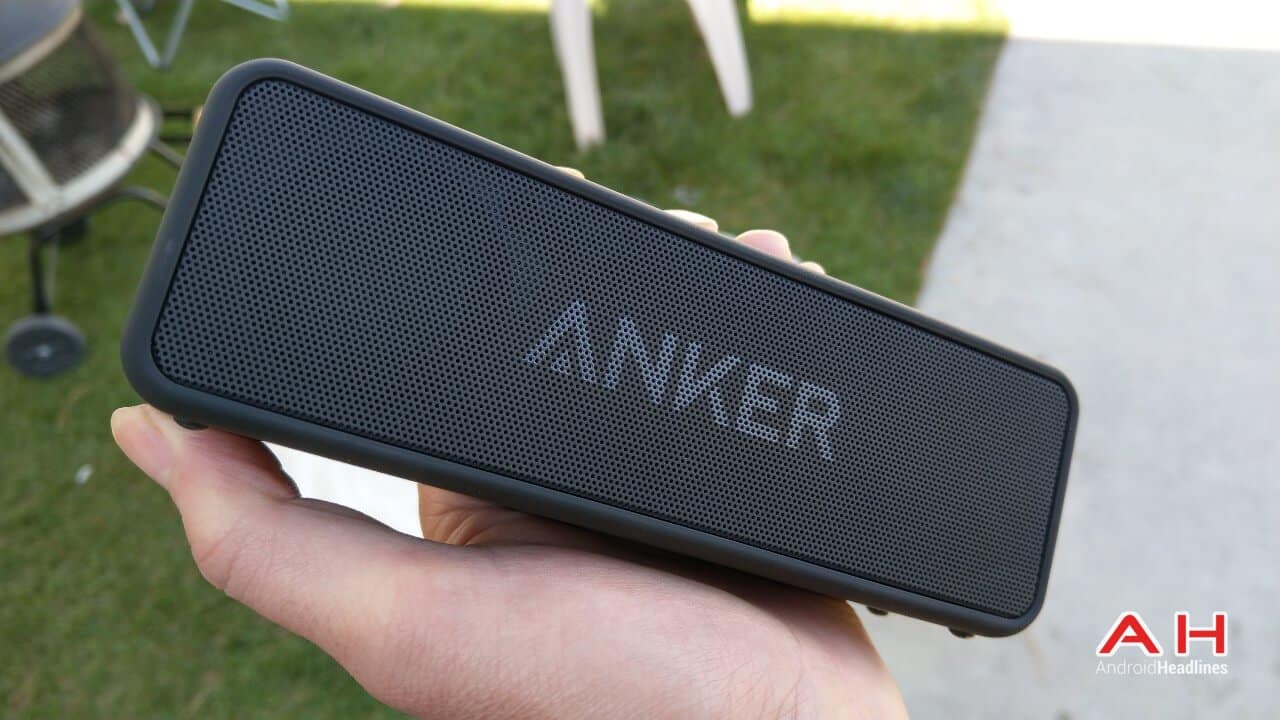 On the hardware front, all of the build quality ANKER has earned a reputation for shines through. It isn’t recommended that users drop the speaker or submerge it but it feels very solidly built. The material used, as described above, will pick up particulates such as dust or pet hair. That’s fairly common in any device that uses this type of material but it also wipes clean very easily in this case. That means there won’t be any beach sand finding its way into the carpet or any similar problems. Meanwhile, it feels soft and comfortable in the hand and the use of metal in the speaker grill means that it should be able to survive quite a bit of abuse. On the other hand, we did find that opening the charging and aux port cover was tedious at best. Everything closes up again easily enough and things improved over time but it was a pain to get open the first several times. All of the ports fit snugly as well, meaning that they should last quite a long time before having any kind of issues. 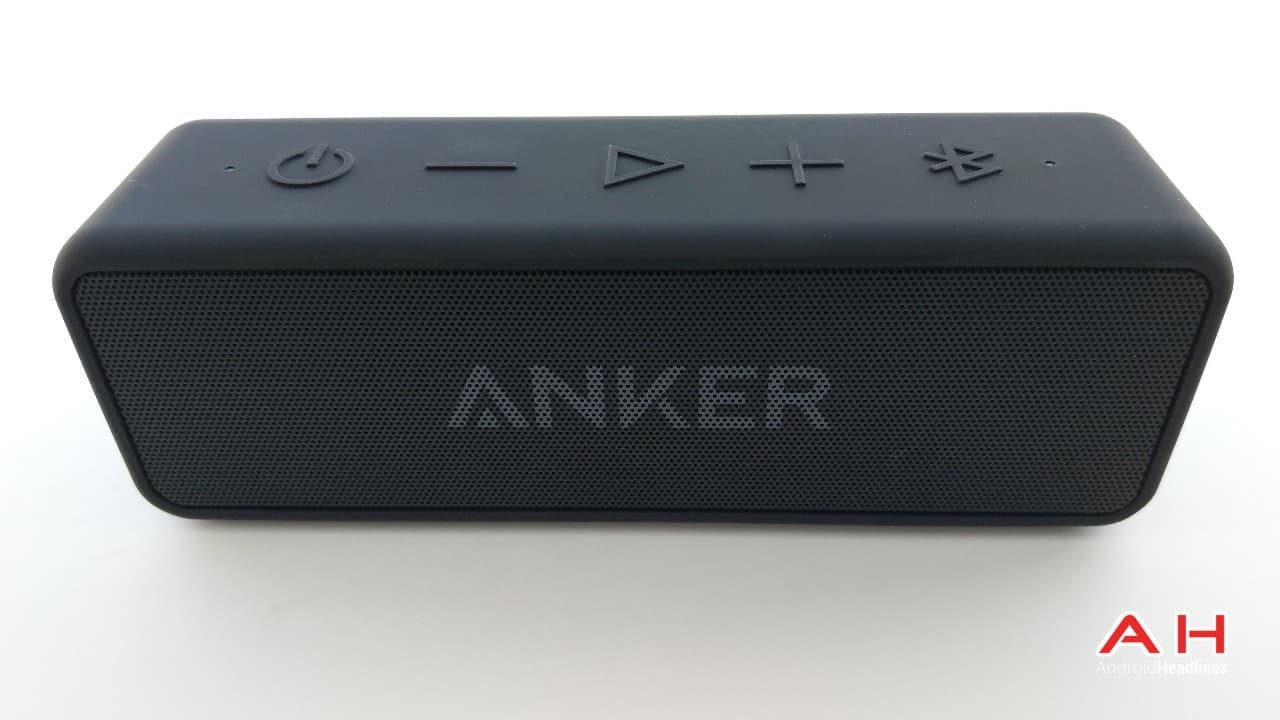 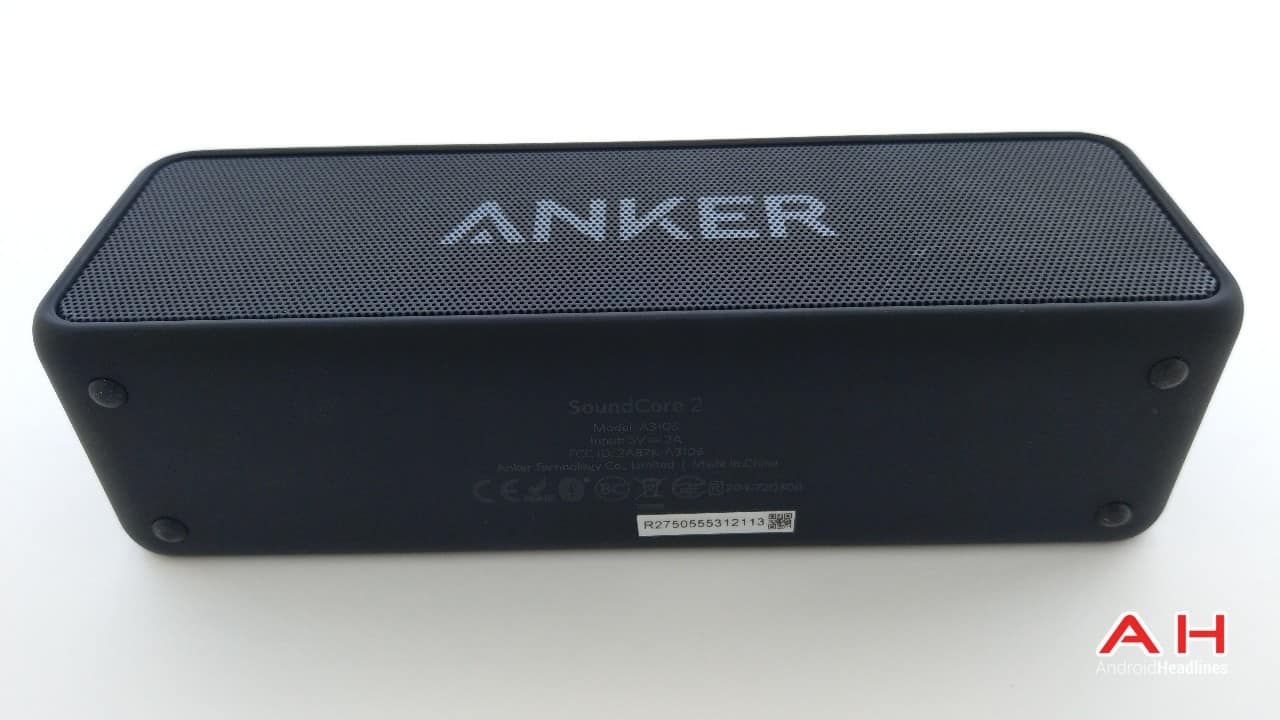 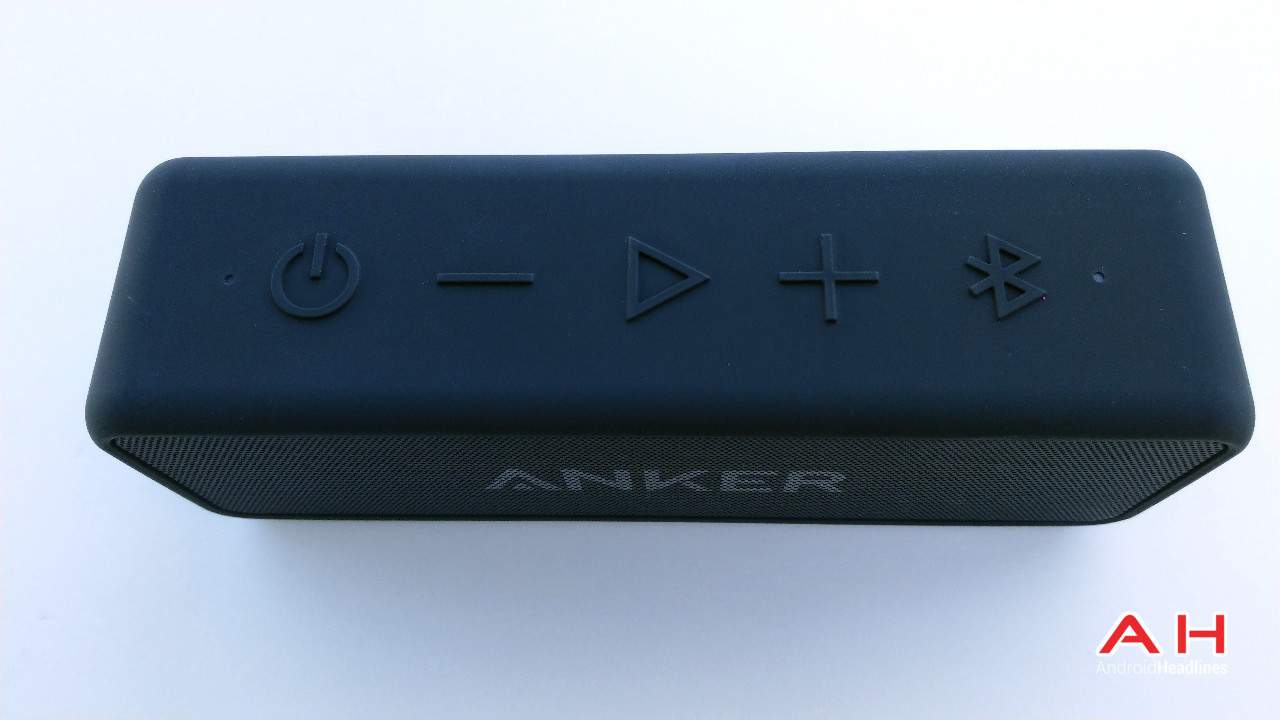 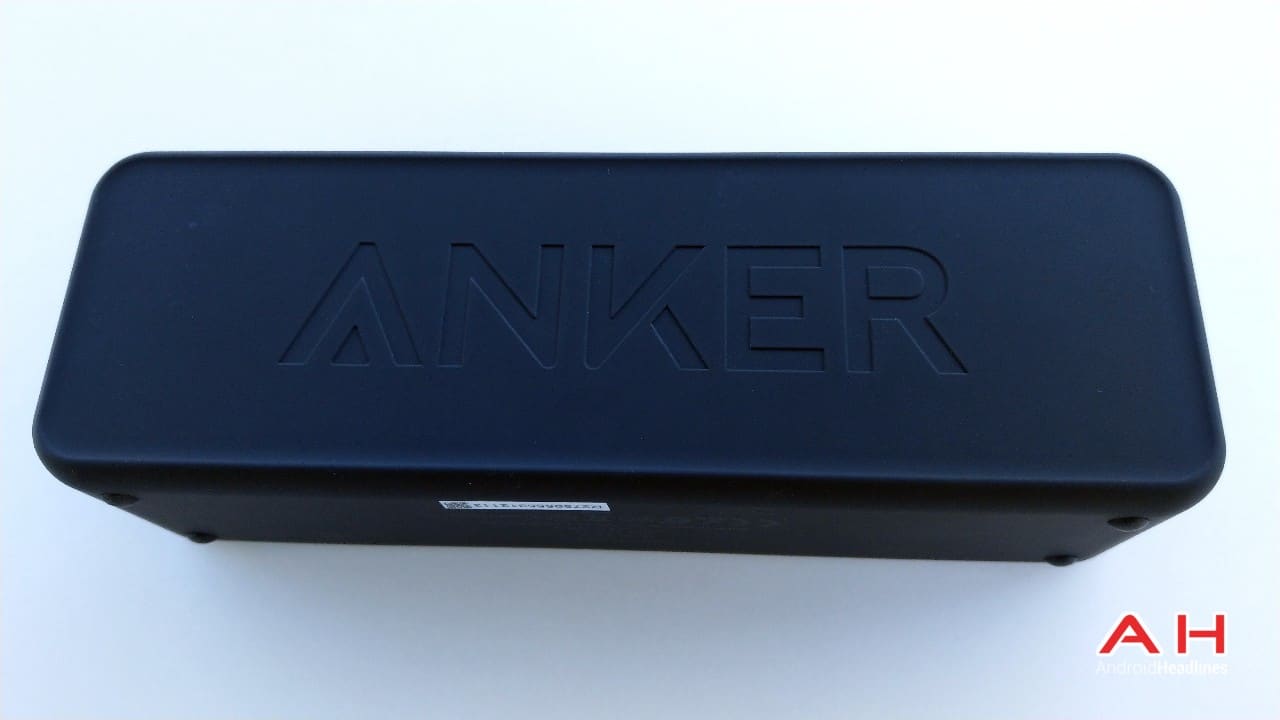 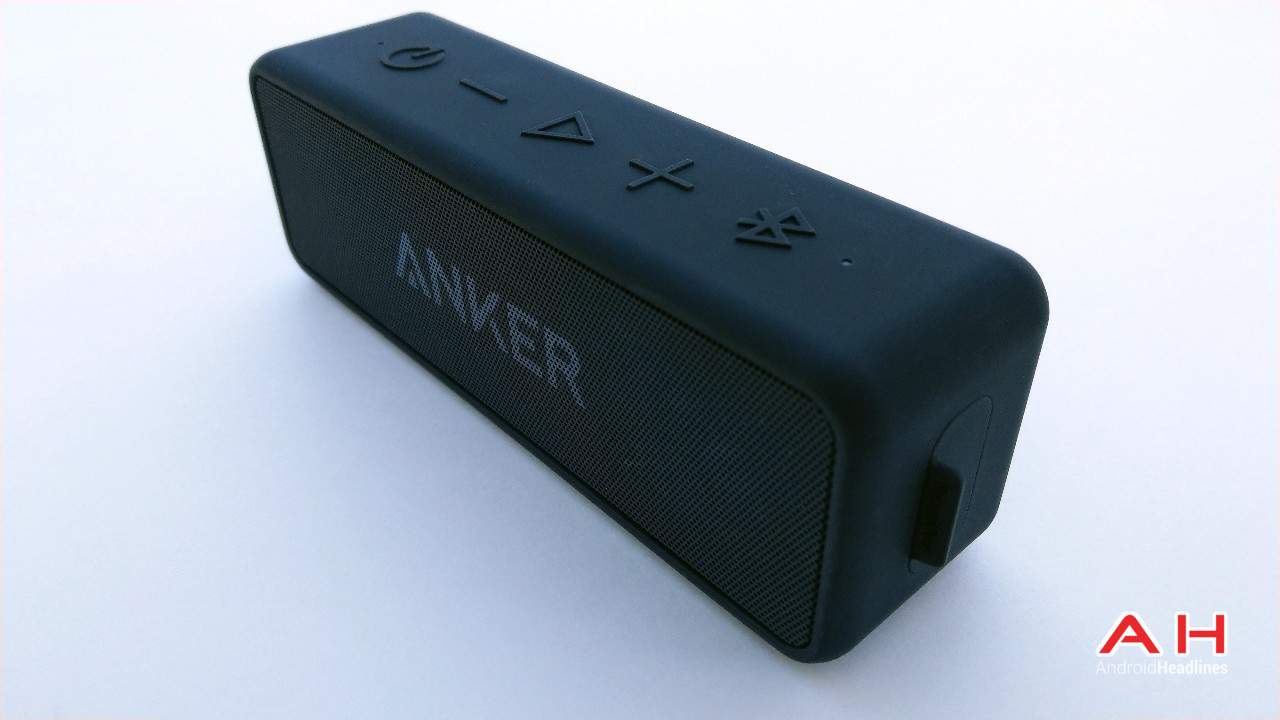 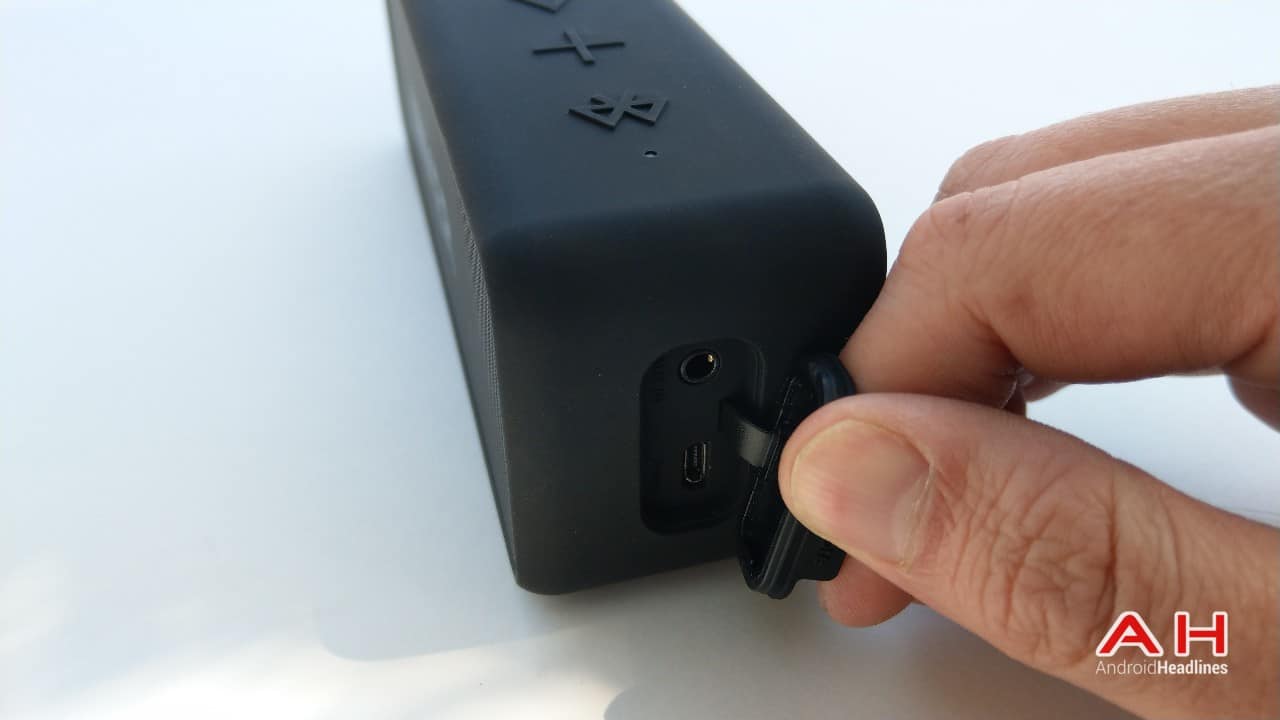 With regard to design and aesthetics, this speaker will fit in just about anywhere with just about any decor. The matte blacks used in our test unit would look just as good next to or on top of high-end furniture as it would in any other setting. Its rubber feet ensure also it doesn’t budge too much once it’s been placed. For those seeking more personality and flare, it’s not unlikely that rings true for the blue and red variations of this speaker. The buttons for controlling the SoundCore 2 are equally well-thought-out. Not only are they clicky and solid but they allow for easy functionality, including A.I.-assistant access and phone controls when connected to a smartphone. 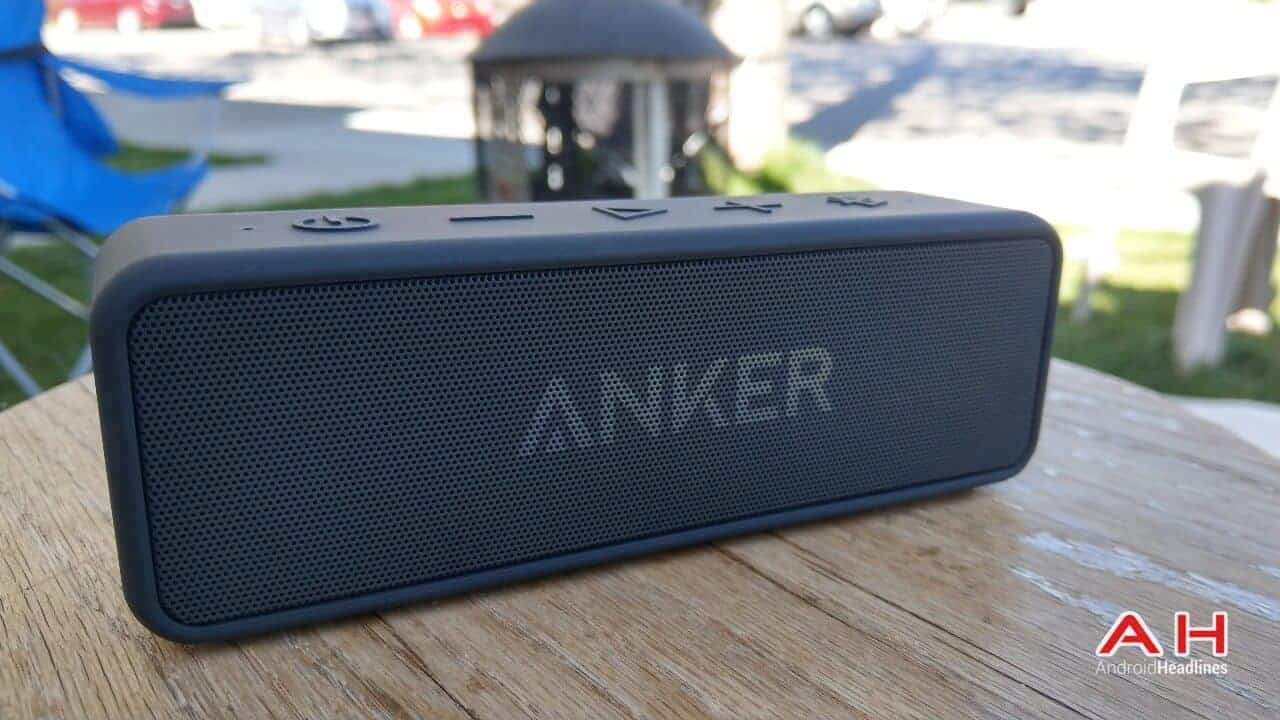 Of course, this is not necessarily the best Bluetooth speaker to buy for anybody that happens to be after a heavy-hitting bass boom. It’s just too small in size to really thump that way and that doesn’t seem to be the point here anywhere. That’s not to say that the SoundCore 2 won’t put out any bass tones. In fact, it throbs satisfyingly on every thrum whether that’s synthetic or played on an instrument. Moreover, if placed on a hard surface with plenty of resonation, such as a wooden table, the sound would very nearly suit the above-mentioned purpose. Beats-heavy songs classifiable as house or techno probably would probably be best served by something much more powerful. Perhaps more importantly, though, those tones ring through clearly without distortion and without sounding tinny or muddy.

That translates across what feels like the entirety of the sound spectrum, within reason. For music falling into the rock genres, guitar solos scream through, balanced out by the mids and lows. With hip-hop, the vocals and subtleties don’t get lost in the chaos. Above everything else, ANKER seems to have carried through and improved on the quality present in its original SoundCore speaker. That means there are few if any, genres that this speaker won’t sound good with. It also means the SoundCore 2 could easily be used alongside a smartphone, tablet, or projector for movies or television viewing. For its size, there just doesn’t seem to be much holding it back. Volume is enough to fill a two-bedroom apartment or decent sized courtyard. It could also fill a car well enough, in a pinch. 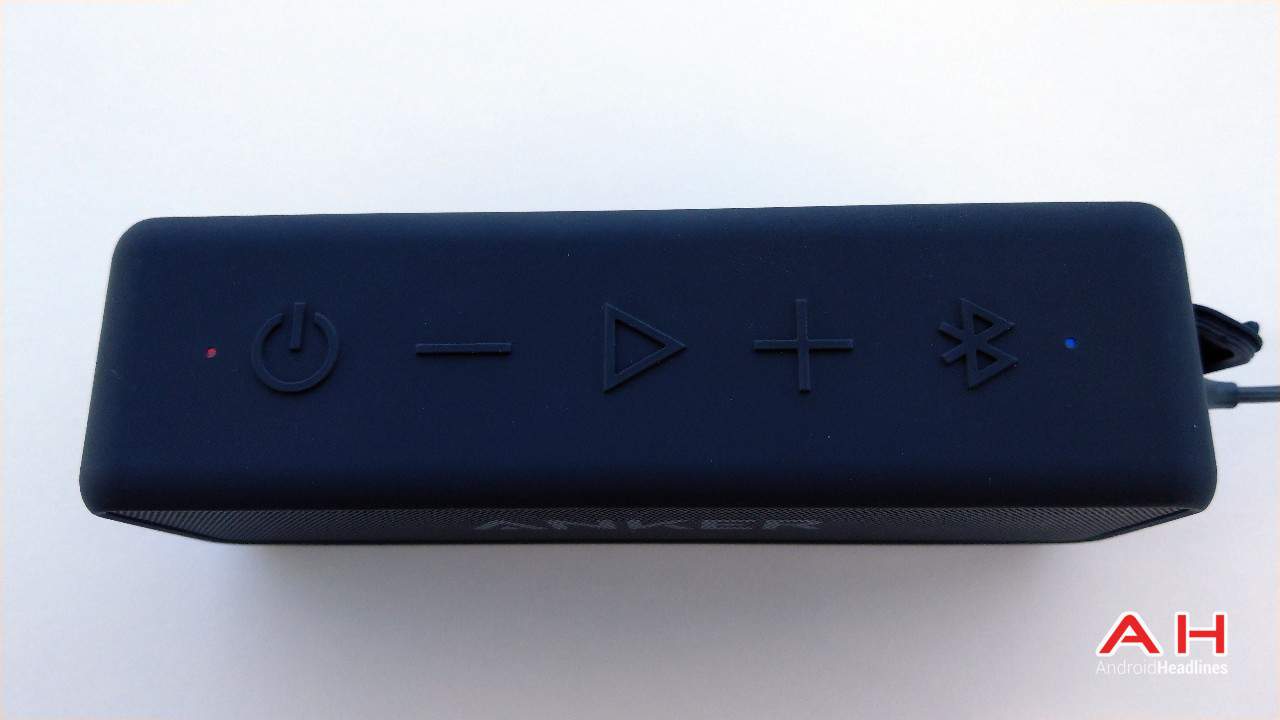 Connectivity is available in two ways, Bluetooth and by an auxiliary cable. Bluetooth 4.2 ensures that audio transference is not only clear and nearly lossless. That also allows for playback at up to 66-feet without worry about stability or skipping, while the above-mentioned battery allows for a claimed playback of up to 24-hours on a charge. ANKER says it should only take around 3 hours to charge up completely and LED lights are present to guide both charging and connecting processes. For those with source devices that don’t feature Bluetooth or those who prefer to tie in via aux cable, there’s a 3.5mm port for that. That’s hidden just behind the same protective door that hides the micro USB port.

Unlike with some other budget Bluetooth speakers, that claim to a battery life of up to 24-hours doesn’t feel misleading. Obviously, that’s going to depend on how the user has connected to it, the distance for Bluetooth connection, and other factors such as volume. Having said that, it seems to easily attain 20-hours of playback under even strenuous circumstances. The party is almost certainly going to wear down before the battery in ANKER’s SoundCore 2 does and with plenty left over for day two.

The ANKER SoundCore 2 has all of the optimization, volume, and balance normally attributed to speakers twice its price and that comes with both the build quality and style ANKER is known for. On top of that, it fits comfortably in-hand and fits easily in a bag or purse for maximum portability. To put it frankly, nearly everything that could make this speaker a better buy is available in other speakers but not for the price or portability. At around $40 and if ruggedization features and sound quality are taken into consideration, the value of ANKER’s latest speaker simply cannot be overstated.