An unannounced LG smartphone bearing the model number LM-Q710.FG was recently discovered in the Geekbench database where some of its technical specifications have been revealed, including its SoC, RAM volume, and OS version. According to the new information, the handset should be equipped with a MediaTek Helio P10 chipset coupled with 4GB of RAM, and as far as the software is concerned, the unit relies on Android 8.1.0 Oreo which is presumably a heavily modified version of Google's operating system. Although the exact name of the device goes by unmentioned in the Geekbench datasheet, it’s worth reminding that a device featuring a similar model number was approved by the FCC last month, and as of this writing, the LM-Q710 is expected to hit the market as part of the OEM’s Q series, namely as the LG Q7.

Assuming that the LM-Q710 will indeed be released as the LG Q7, then it’s worth noting that this will be the Korean tech giant’s first smartphone from the Q series to adopt a MediaTek chipset. In contrast, the LG Q6 and Q8 launched last August were both powered by Qualcomm’s solutions, namely the Snapdragon 435 and Snapdragon 820, respectively. As for MediaTek’s Helio P10, the chipset was introduced back in late 2015 and it fits in the lower mid-range segment. The SoC is manufactured on a 28nm process node and features four ARM Cortex-A53 CPU cores clocked at up to 2.0GHz, along with four additional Cortex-A53 cores operating at a maximum frequency of 1.2GHz. The processor works alongside a Mali-T860 MP2 (dual-core) GPU.

No other significant hardware details were revealed by the benchmarking tool but according to the previous FCC filing, the LM-Q710, i.e. the LG Q7 will have an elongated 18:9 display, much like the LG Q6 had last year. As for when the device might become available for purchase, as yet there’s no official information to go by but it’s worth noting that the LG Q7 has already been approved in Russia along with the now-official LG G7 ThinQ, so its commercial launch may not be far away. 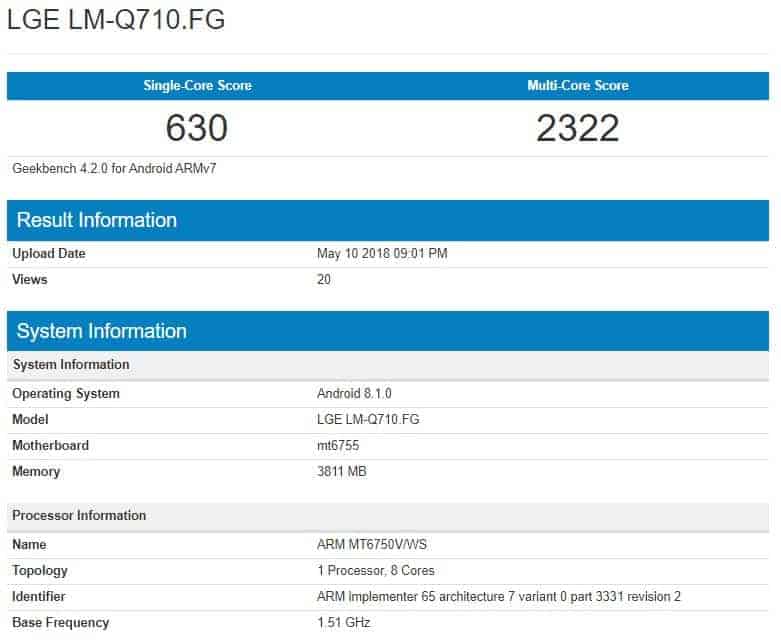