Skip to content
Advertisement
Trusted By Millions
Independent, Expert Android News You Can Trust, Since 2010
Publishing More Android Than Anyone Else
43
Today
152
This Week
242
This Month
8376
This Year
125853
All Time
Advertisement

Ever since Google announced the Daydream VR platform there has been plenty of excitement surrounding it thanks to the possibilities for content and hardware, but fast forward two years and the excitement from a consumer standpoint seems to have slowed down just a little bit. That’s even in presence of the Lenovo Mirage Solo headset that was initially announced last year during Google’s Fall event where it announced the Pixel 2 and Pixel 2 XL, though at the time it was only known that a headset from Lenovo would be coming and that it would be based on Daydream, and be a standalone offering.

Months went by and nothing was heard in regards to the headset until CES 2018, where Lenovo finally unveiled the Mirage Solo alongside the Mirage Camera. With the headset being announced back in the beginning of October and an initial thought that it would be launched before the end of 2017, it’s now been around six months since the consumer public has known about this upcoming Daydream headset that wouldn’t require a phone to power it. Will the Lenovo Mirage Solo be worth the wait? That’s a tough question to answer and likely it’ll come down to a personal preference for the features of the headset, it’s also worth considering though that the headset isn’t going to launch until sometime in the Spring of this year, It’s now technically Spring but the headset has yet to launch. According to Amazon it will launch on May 6, and will cost $399. So for $400, and a little over one more month to wait, consumers interested in VR will have to start thinking about whether or not the Mirage Solo will be the best headset for them to dive into VR with. 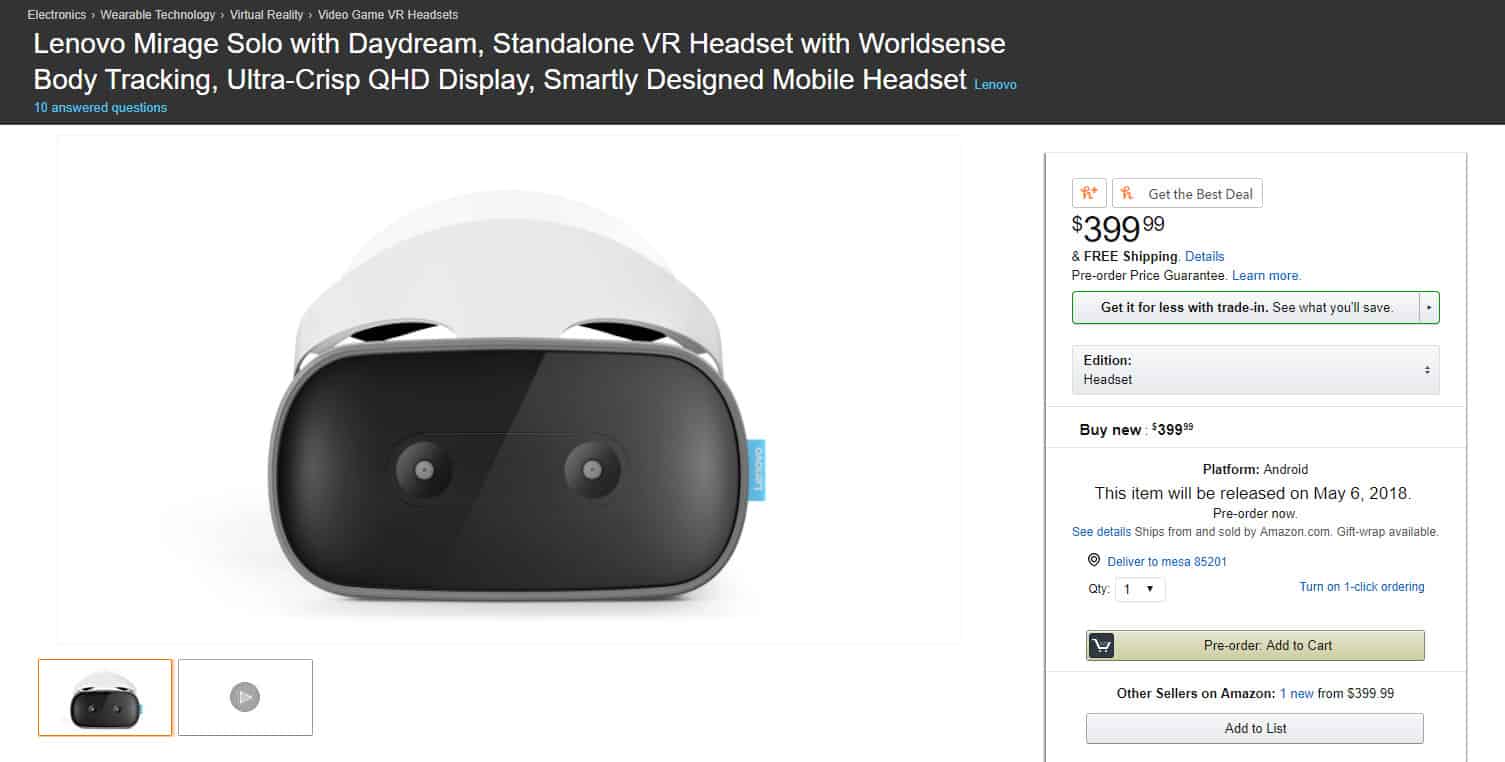 For the price of $399, one could simply pick up a PS4 (non-pro) and a PSVR headset, though getting both of those at a similar price to the Mirage Solo would be contingent on getting each while it was offered at a sale discount, which does happen often enough. Should that be the case, you’d be getting a much more powerful headset with more high-quality games. That isn’t to say that the Mirage Solo won’t have high-quality content on offer, but it won’t be on par with what you can pick up for PSVR, which pulls into question whether waiting for the Mirage Solo will be worth it, especially if the PS4 and PSVR can be picked up for close to the same price.

One important factor to consider is that despite the possibility of picking up the PSVR and the PS4 for the same price of the Mirage Solo if there are available sale prices, is that the Mirage Solo still has one thing over most other VR headsets. The fact that it’s a standalone headset, which makes it more versatile and more portable than any other offering really. Though it may not have the same quality of games as some of the high-end headset options, it can work anywhere and doesn’t need to be tethered to anything or be powered by an external piece of hardware. That’s a huge benefit to anyone who wants to be able to experience VR at any time without any restrictions. Will the Mirage Solo be worth the wait? For some yes, for others no. It all comes down to preferences and what you want out of your VR experience, but it might serve the Daydream platform better if standalone headsets for the Daydream platform were released sooner rather than later.