Mobvoi's Ticwatch E – short for Ticwatch Express – is a hybrid fitness-geared smartwatch that isn't at all limited to fitness enthusiasts. While it is a bit on the thick side, it's lightweight, unassuming aesthetic and Wear OS underpinnings mean that it really is a smartwatch for anybody. With its price placing it squarely at the lower end of the spectrum and its high level of functionality, coupled with a feature-rich design, it really doesn't leave a lot to be desired. Although the industry, in general, appears to have plateaued, this may just be one of very few smartwatches that provide a glimpse of what smartwatches can be. Put simply, the Ticwatch E represents an Android wearable that brings very few caveats to the table at a price that feels like a steal compared to what the Mobvoi delivers. 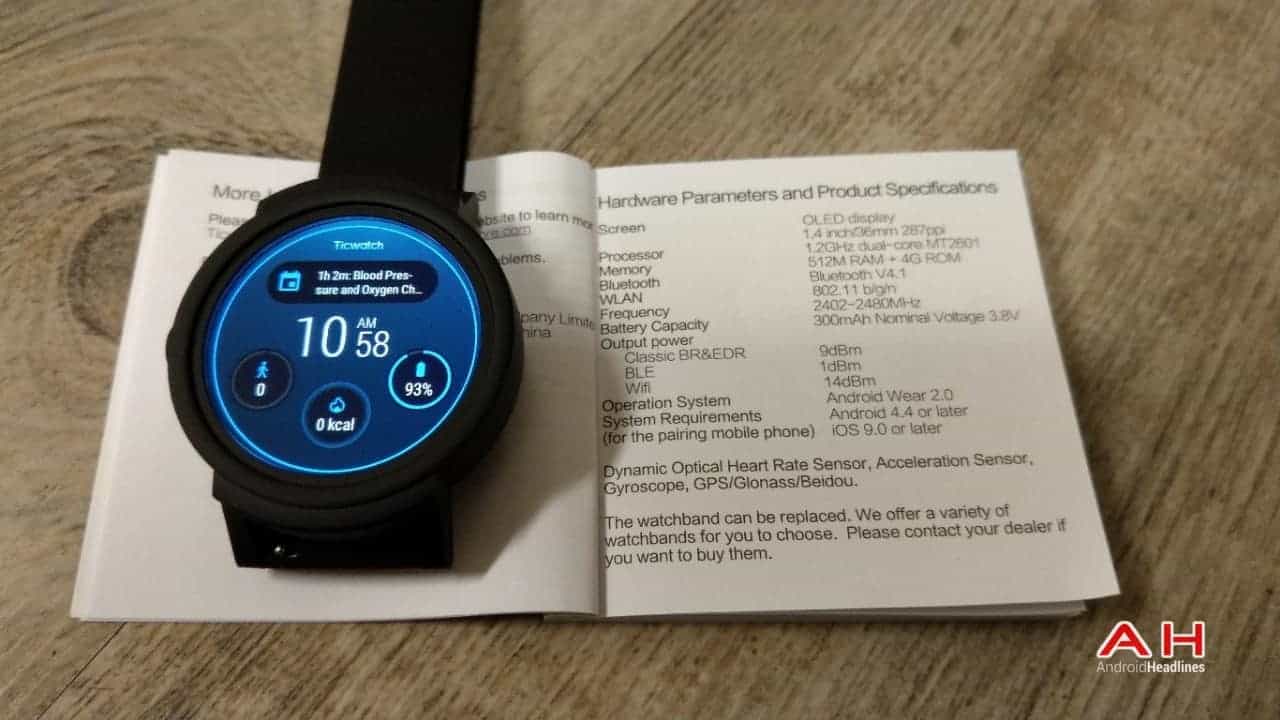 In terms of specs, this is obviously not going to be the most powerful Wear OS device to ship this year at just $159.99. On the outside, a circular polycarbonate frame measuring 44mm from edge to edge, with a thickness of 13.55mm houses a 1.4-inch OLED scratch-resistant display. That screen has a comparatively high resolution at 400 x 400 and 287 dpi. Around the edges of that is a single physical button, situated on the left, which looks like a standard watch button but doubles as a power and home button. The adjustable silicone strap is also fairly standard, using quick-release pins to stay in place and measuring 20mm in width. The whole package weighs just 41.5g. Microphones are located along the left edge and on the back of the device. The charging connectors, speaker slot, and an optical heart rate sensor can be found on the underside as well.

On the inside, this hybrid smartwatch and fitness wearable is powered by a 1.2GHz dual-core MediaTek MT2601 SoC. That’s backed up by 512MB of RAM and 4GB of storage. All of that is powered by Wear OS 2.0, which drives the Bluetooth 4.1 and Wi-Fi 802.11 b/g/n radios. There’s no mobile data radio to be found in this wearable but that’s in addition to the built-in gyroscope, e-compass, proximity sensor, acceleration sensor, and GPS/GLONASS. The powerhouse for that hardware is a 300mAh battery, which charges at a max of 5V/1A for up to 48 hours of battery life depending on how the hardware is used. The internals are protected by an IP rating of IP67. For more personality, the Ticwatch E ships in three color options. Our unit was the “Shadow” variation, which is a matte black color. It is also available in a white “Ice” configuration or an almost too bright “Lemon” color. 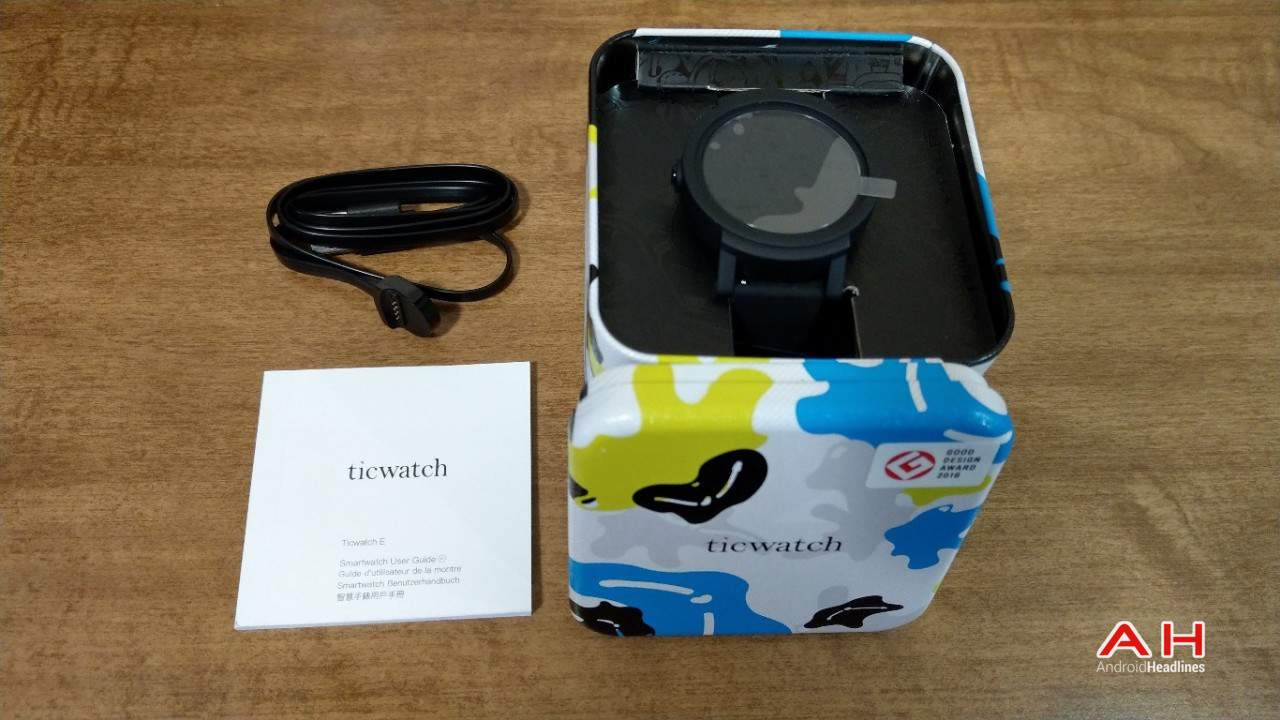 The Ticwatch E arrives in a colorful metal tin which, when opened, reveals the fitness smartwatch itself with a protective film to keep the display relatively safe during the shipping process. Prying the watch and cardboard out of the way, there's also a hefty user manual for explaining all of the functionality, how to get connected, and other pertinent information. Customer care information is in the manual, as is a link to Mobvoi's warranty page for Ticwear. Aside from those, the only other object in the package is a flat 2.5-foot charging cable. That's a standard USB to proprietary pogo pin dock. No wall adapter is included, so users will need to check their adapter or the USB port they plan to charge with and ensure it doesn't exceed the recommended 5V/1A maximum charge rate. 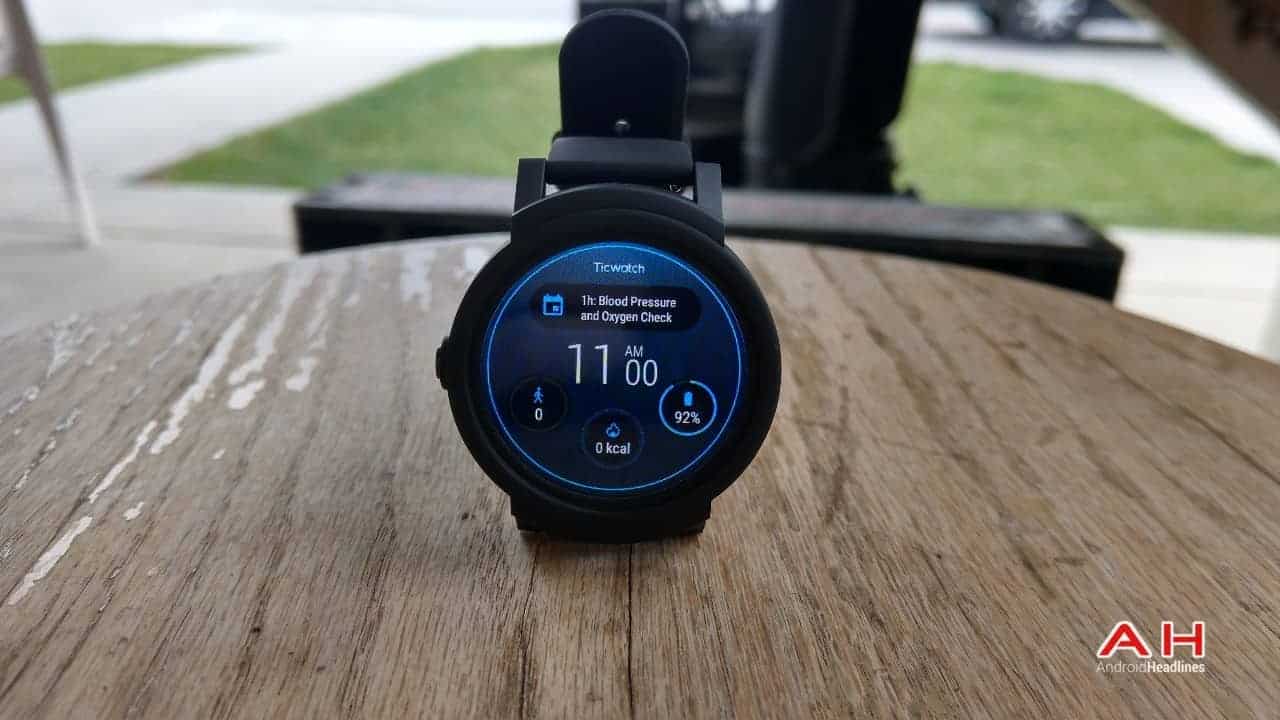 The modern minimal design in use here is great. It places the form on an equal footing with function. The physical button clicks through smoothly without being so easy to press as to cause problems with accidental clicks. This smartwatch is a bit on the thick side but the weight is low and it isn't so thick that it feels inhibitive or like it will get caught on anything. The use of matte polycarbonates and silicone mean that fingerprints will not be an issue and an anti-scratch screen gives the Ticwatch E a durable feel in-hand. This wearable does, however, seem to have a propensity for gathering lint, dust, and other particulates. It's not immediately clear why that is, but it's easy enough to clean off thanks to its IP67 rating, even if it can be a bit bothersome. Screen protectors and aftermarket straps are available and the use of quick pins makes changing a simple process. Beyond those specs of its design, this wearable's speaker is quite loud and sounds accurate for its size but wearers shouldn't expect to listen to music on their new watch. The microphone also works very well and the screen is yet another area where the Ticwatch E really shines. It has plenty of brightness and feels very responsive to touch inputs. Resolution is very high for a display in this size category, as well, so all of the visuals are crisp and both text and imagery are easy to read.

Watch faces included with the Ticwatch E could be said to match up with one of two categories. Fitness and productivity faces allow for custom tracking of goals, steps, calories, calendar events, or other app-drawn data. More standard faces are available as well to match occasions or personal tastes in various colors. Of course, watch faces from the Play Store are also supported so it's just a matter of what the individual user likes. Having said that, the faces included with the watch are also quite nice and should be enough to suit most users in most circumstances. That's helpful for those users who don't feel like going through the extra work. There's not much about this watch that would make it feel out of place, whether at a nice restaurant or at the gym. 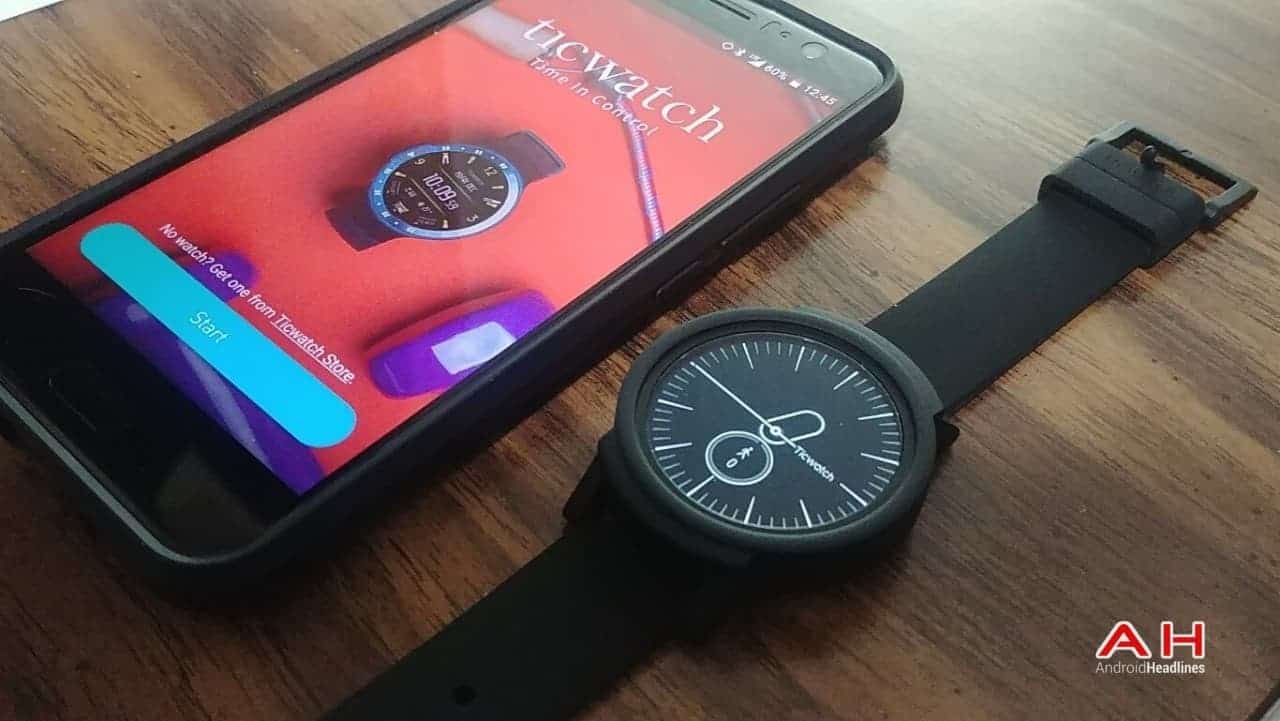 On the software front, the Ticwatch Express is running Android Wear – now called Wear OS – under the hood. That’s Wear 2.0, so Google’s Play Store is included alongside full apps and a range of watch face functions such as complications. The latter allows the watch face to pull data from other apps in order to display real-time information from those apps on the screen. All of the default watch-faces here include those, though the company has labeled them “elements” instead. The up-to-date software has been optimized to a high level with the Ticwatch E, so all interactions feel very smooth and lag-free. It can be easy to forget how affordable this Android smartwatch actually is during day-to-day use.

Unfortunately, at least one of the advertised features – namely, the e-compass feature – is notably missing from the installed apps. After doing some searching, it seems the compass did not work properly so it may have been removed and could see a return if and when a software update hits this device. In the meantime, everything else here seems to be in order. The watch will, when given permission during setup, pull apps and app data from a user’s smartphone. That means that some functionality for a few apps, such as Google Maps, will require some phone interaction. However, others don’t require interaction with the attached smartphone at all. Google Assistant is included, as is a full swipeable keyboard. While using Assistant should be very straightforward for anybody who has used the tool before, the keyboard actually stood out quite a bit more. It is very easy to use, despite its size, and auto-correct has been optimized so that we didn’t experience any problems with it at all. That’s helpful since messaging apps and other similar apps are available for this smartwatch via the Play Store and phone connectivity. 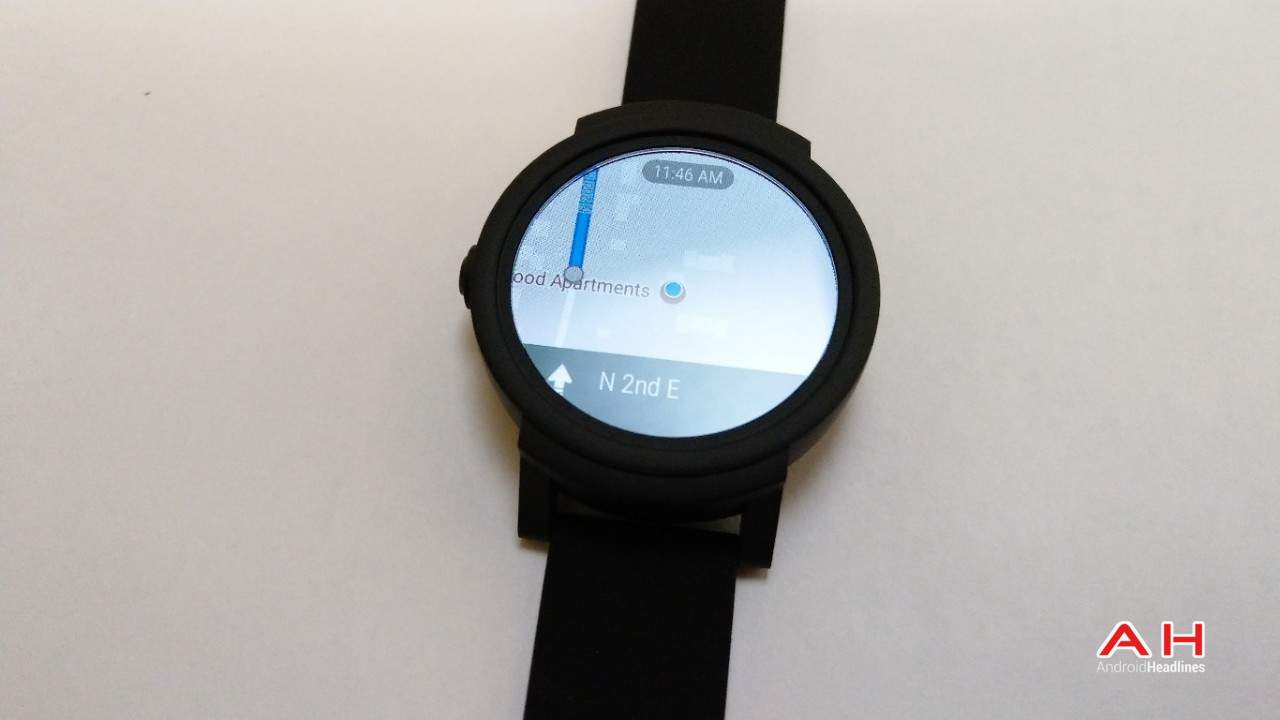 With regard to specialty features and software, there's not much to speak of here. The Ticwatch E comes with everything users might expect from a Wear OS 2.0 smartwatch without too many frills. The heart rate monitor, as compared to a medically certified monitor, appears to have a high accuracy. In many instances, the numbers were only off by one or two while in others they matched up precisely with the medical-grade home devices we compared it to. On the other hand, users can download the Ticwatch app to get the manufacturers own take on fitness recording software and there is a fitness app included for an outdoor run, outdoor walk, indoor run, cycling, or freestyle mode. Swimming, showering, or bathing with this watch is not recommended despite its IP rating. Meanwhile, the Health app enables users to track their steps in a reasonably accurate manner, setting goals and active hours – with the capability to include activity reminders for the more lazy days. Localized activity rankings are also available, and sleep tracking is possible, according to Modvoi, via third-party apps. 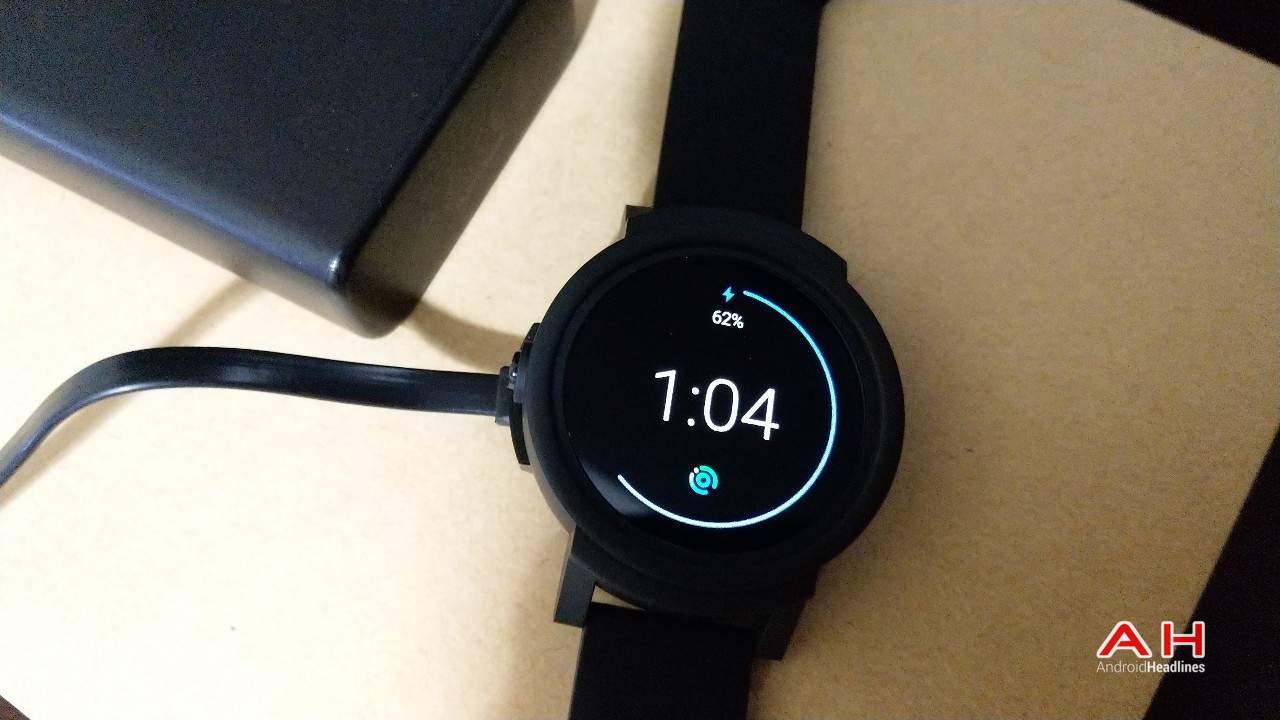 The battery behind the hardware has a claimed life of 48 hours but that's going to drop significantly with the watch's always-on feature activated, connectivity options turned on, and screen brightness turned up. Users can, of course, leave the brightness at its default middle setting for most situations and always-on is relatively pointless since a quick turn of the wrist will activate the screen so that the time can be checked. However, our presumably average usage saw battery life closer to a little over a day in between charges. That's not necessarily an issue since the Ticwatch E takes just under an hour to charge. Best of all, the charging adapter is very stable and easy to set, so users can just pop it on the charger while they're getting ready for the day. It probably isn't a good idea to leave it charging overnight, since that will almost certainly shorten the overall lifespan of the battery.

Design includes a microphone and speaker

No wall adapter included in the package

Thicker than some premium smartwatches

No e-compass anywhere to be found, despite being advertised

Material seems to attract particulates, such as dust and lint.

The question that remains in all of this is whether or not Mobvoi's Ticwatch Express is a worthy consideration. As outlined above, there really isn't much to dislike about its design or its features. In fact, this wearable OEM did win at least one award – the Good Design Award – for its Ticwatch S in 2016 and the design hasn't changed all that much since then. It's still a minimal approach that wouldn't be out of place at any jeweler or in any watch store. What's more, there are plenty of ways a buyer could do worse when considering a sub-$200 smartwatch. So, pending some new growth and advancements in the industry or market, this wearable is going to feel like a steal and should be near the top of anybody's list.

Buy The Ticwatch E
Advertisement
Trusted By Millions
Independent, Expert Android News You Can Trust, Since 2010
Publishing More Android Than Anyone Else
0
Today
129
This Week
287
This Month.
287
This Year
110477
All Time
Advertisement