Android smartphone makers face a clear uphill battle against the popularity of the iPhone when it comes to younger buyers in the US, according to the results of a new study by investment bank and asset management firm, Piper Jaffray. As the results of the survey not only highlight how no less than 82-percent of those surveyed currently admit to owning an iPhone, but that percentage is only likely to increase going forward: with 84-percent stating their next phone will be an iPhone. A figure that if reached will represent an all-time high in the history of this survey and following the all-time high already reached with the 82-percent ownership.

In terms of the background of the survey, Piper Jaffray conducts this data gathering exercise on a semi-annual basis to see how younger buyers view and interact with markets and brands in general. Therefore, the survey looks at many different aspects of the retail sector with choice of smartphone brand being one of many of the aspects measured. The data for this latest survey was compiled from answers provided by 6,000 teens in the US with an average age of 16.4 years. Likewise the results were fairly gender-equal with 55-percent of those surveyed identified as male and 45-percent as female. In addition, the surveyed teens do represent a fairly widespread interpretation of the US with data collected from teens in 40 states. While this is likely to be of concern to Android smartphone makers, the figures related here are relevant to a subset of the market with previous data collection reports showing the overall US market share as more favorable to Android – although Apple does remain the single most popular brand in the country and by most measurements. Also, at the global level previous reports and surveys have consistently shown Android to be the overwhelmingly dominant operating system in general.

Phone brand/operating system aside, this latest survey also shows Netflix to be popular among teens with 39-percent of those surveyed registered as daily users of the streaming service. This compares to YouTube (30-percent) and Hulu (5-percent). As for social media platforms, Snapchat proved to be the most popular (45-percent) with Instagram a fairly distance second (26-percent), followed by Twitter (9-percent) and Facebook (8-percent). The infographic below provides an overview of the highlights of the survey. 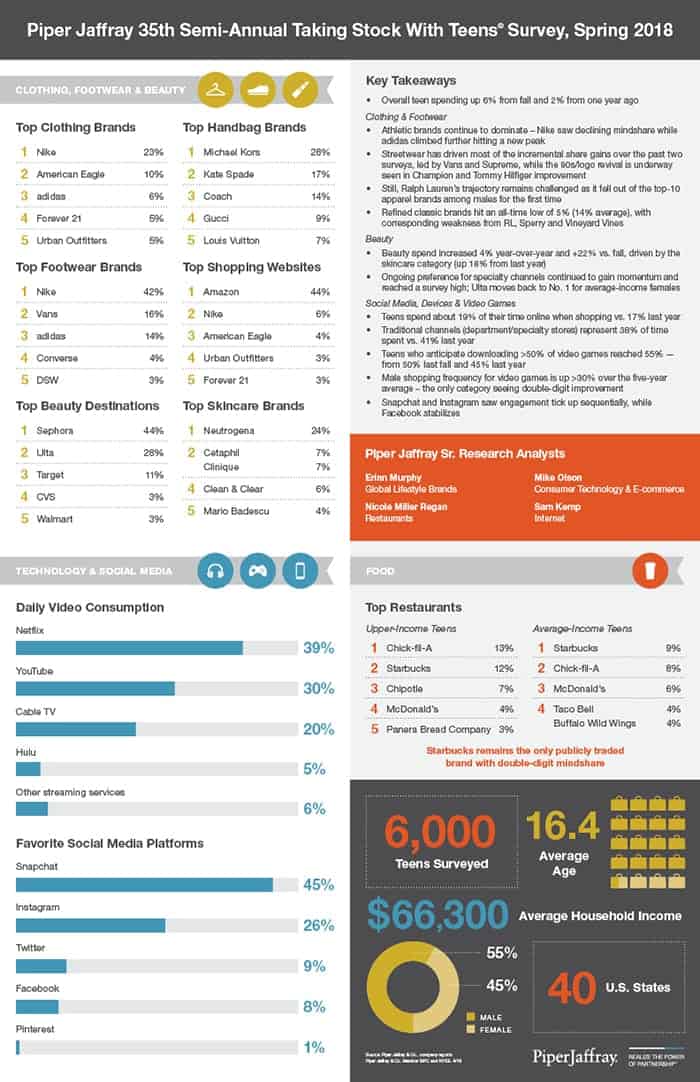