The Samsung SM-G8850 got certified by TENAA (China’s equivalent to the FCC) quite recently, and the phone has just surfaced on AnTuTu as well. AnTuTu says that the device will be fueled by the Snapdragon 660 64-bit octa-core SoC, which is a piece of info that was not available via TENAA. Interestingly enough, AnTuTu says that the phone will include a fullHD+ display with a resolution of 2220 x 1080, while TENAA said we should expect a panel with a resolution of 2960 x 1440, so it remains to be seen whose info is accurate, as the info is conflicting.

A 4GB RAM variant of the Samsung SM-G8850 popped up on AnTuTu, though a 6GB RAM model will also be available if TENAA is to be believed. AnTuTu claims that a 4GB RAM model of the device will ship with 64GB of native storage, while Android 8.0 Oreo will come pre-installed on this device, with Samsung’s custom UI, of course. The source also revealed that the device scored 136,483 points in AnTuTu’s benchmark tests, which is just about right having what processor fuels the phone. Having said that, TENAA also said that a 3,000mAh non-removable battery will be available in this package, and that the device will offer expandable storage, you will be able to expand its storage up to 256GB via a microSD card. 12 and 8-megapixel snappers are expected to be included on the back of the Samsung SM-G8850, while a single 8-megapixel camera will sit on the phone’s front side.

Now, the Samsung SM-G8850 will measure 147.7 x 68.7 x 8.4mm, while it will weigh 163 grams, and the phone will be available in Black and Blue color options, according to TENAA. Some sources are suggesting this phone could be called the Galaxy S9 Mini, or something of the sort, but the device differs from the Galaxy S9 in terms of the design. This handset’s dual cameras are vertically-aligned, and are placed in the upper-left corner of the phone, while its fingerprint scanner is located in the upper portion of the phone’s back side. Samsung will probably introduce this phone in the near future, so we’ll get all the necessary details, but for the time being, the name of the device is unknown. 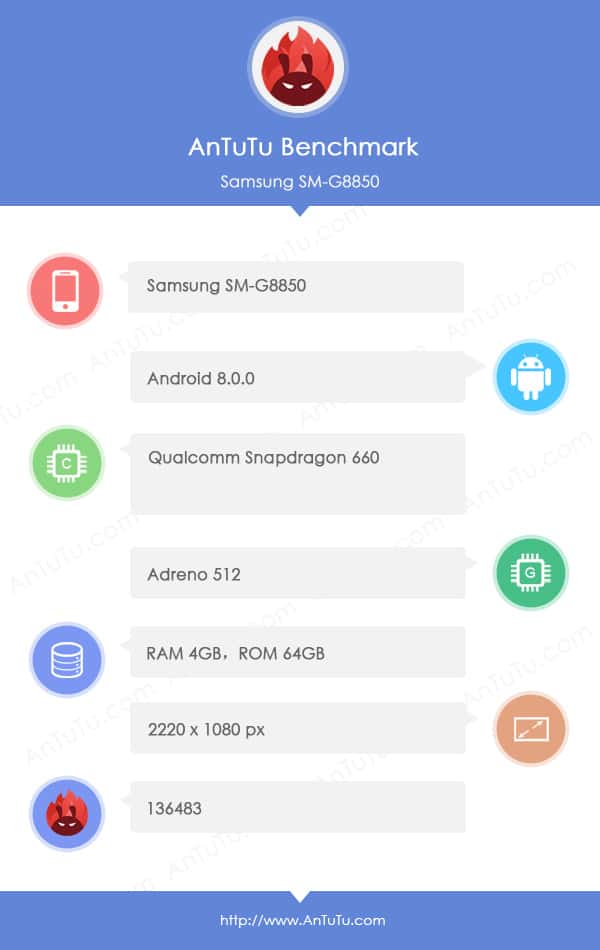