Following the Samsung Galaxy A6’s visit to the Wi-Fi Alliance late last month, the Galaxy A6 Plus variant bearing the model number SM-A605FN also passed through the same regulatory agency today while running Android 8.0 Oreo. Although the series’ launch date remains unknown as of this writing, the Galaxy A6 Plus seems to be closing in on its eventual debut, having already been certified by the FCC earlier this month. The device is said to offer mid-range specifications wrapped in a modern design, and like the Galaxy A8 (2018) lineup introduced late last year, the Galaxy A6 Plus is also expected to make use of an elongated Infinity Display with thin bezels all around.

As usual, the Wi-Fi Alliance application doesn’t reveal any new details regarding the hardware characteristics of the Samsung Galaxy A6 Plus, with previous reports suggesting the handset will employ the Snapdragon 625 silicon from Qualcomm, featuring eight ARM Cortex-A53 CPU cores clocked at up to 2.0GHz and the Adreno 506 graphics chip. On the other hand, Samsung usually reserves Qualcomm’s processors for markets including North America while the OEM’s devices are generally powered by its in-house Exynos solutions in Europe and other regions. Having said that, it’s likely that the Samsung Galaxy A6 Plus won’t be an exception to this rule of thumb and could launch with an Exynos chipset under the hood in certain countries. Previous sightings also pointed to the smaller smartphone having 4GB of RAM, and the Plus variant may have more RAM compared to the standard Galaxy A6.

Samsung originally introduced the A series of handsets as a response to a growing market trend of wrapping mid-range components in premium-grade bodies, combining affordability with decent specifications and a modern design which usually revolves around a metal or unibody frame. Presumably, the Samsung Galaxy A6 Plus will be no different and the inclusion of an elongated 18:5:9 Infinity Display would prove this point further. It remains to be seen when Samsung will debut the upcoming devices given that the ongoing Galaxy A5 (2017) and A7 (2017) were introduced more than a year ago, having launched in January of 2017. 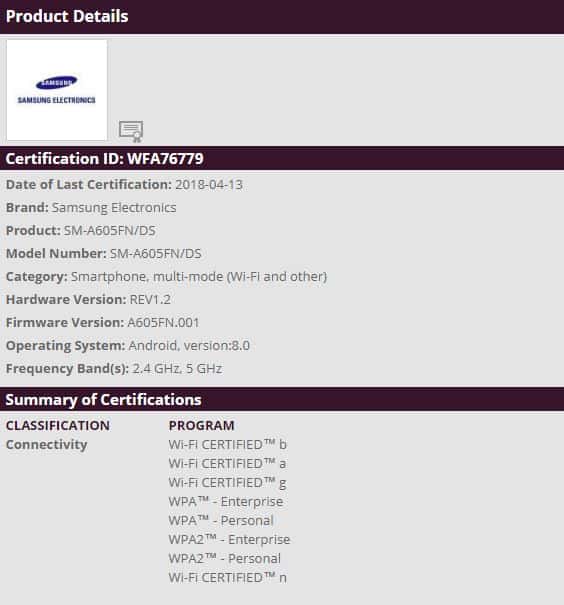