According to the leak, the smartphone will ship with a 5.99-inch LCD display with a resolution of 2,960 by 1,440 pixels amounting to an aspect ratio of 18.5:9, identical to the one of Samsung's Infinity Display panels. The device will have a dual-camera setup with a 12-megapixel sensor and another 16-megapixel module, according to the same source. The handset will also reportedly have a dual front-facing camera setup, which will be equipped with two 8-megapixel sensors. A 3,420mAh non-removable battery with Quick Charge 4.0 should be part of the package as well.

The leak further claims that the HTC U12 Plus will ship with Android 8.1 Oreo, although it is likely that the device maker's proprietary skin will run on top of Google's operating system. In addition, recent reports mentioned that the upcoming flagship will boast Edge Sense 2. The original version of this functionality was introduced last year with the HTC U11, and it allowed users to initiate actions like taking a screenshot or launching applications by simply squeezing the sides of the device. Previous rumors have also stated that the smartphone will sport IP68 water and dust resistance, with the new leak claiming it's set to ship with a price tag of €799, which translates to approximately $981. 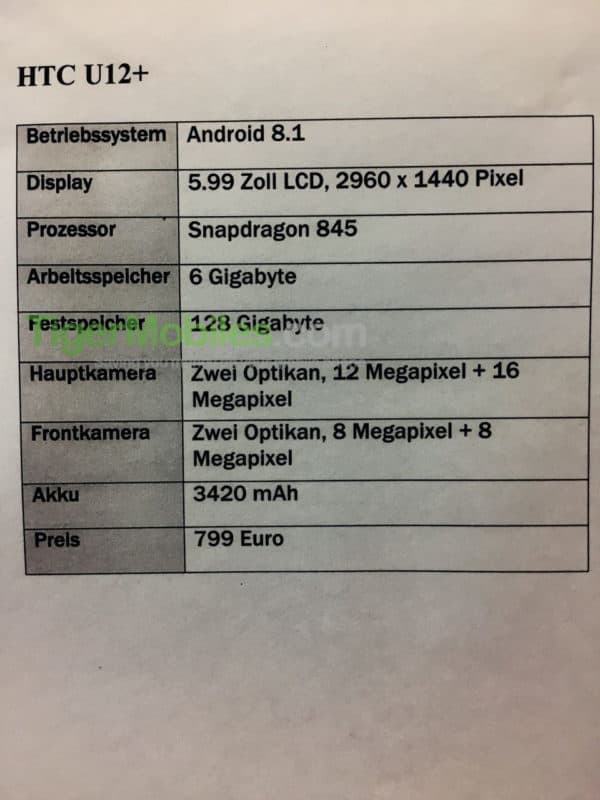