A device identified as Motorola’s still-unannounced Moto G6 Plus appeared in the database of mobile benchmarking tool Geekbench several hours back, having first been spotted by Dutch tech blog MobielKopen. The listing seen below reiterates previous reports about the upcoming Android mid-ranger and is yet another piece of evidence pointing to the Moto G6 Plus as by far the most capable member of the upcoming product family which is also expected to include the regular Moto G6 and Moto G6 Play.

The benchmark determined the alleged Moto G6 Plus is powered by the Snapdragon 660, Qualcomm’s 2017 mid-range chip with eight 64-bit cores clocked at a maximum operating frequency of 2.21GHz. A number of previous reports suggested the upcoming handset will boast machine vision capabilities and while it remains to be seen whether such technologies will be enabled by the Google Assistant, i.e. Google Lens, the hardware side of the equation should be handled by Qualcomm’s silicon itself, the most affordable chip that’s been updated with support for the company’s proprietary Artificial Intelligence Engine in February. As on-device AI computing is otherwise reserved for Qualcomm’s high-end chips, Motorola is likely to advertise the Moto G6 Plus as a premium offering with a non-premium price tag.

The device has been tested while running Android 8.0 Oreo out of the box, with Motorola’s recently employed product practices suggesting the implementation of the operating system found on the Moto G6 Plus will likely be relatively lightweight. The Lenovo-owned smartphone manufacturer already confirmed its first 2018 offerings will be officially announced later this month, with the company recently scheduling a Brazil product event for next Thursday, April 19. This year started in an uncharacteristic manner for Motorola as the firm avoided making new handset announcements at both CES and MWC despite traditionally having a strong presence at both trade shows. The delayed product roadmap may be related to a recent leadership change at the company which saw its President Aymar de Lencquesaing step down in March and being replaced by the OEM’s long-time executive Sergio Buniac who’s entering his 23rd year at Motorola this month.

Advertisement
Moto G6 Plus On Geekbench 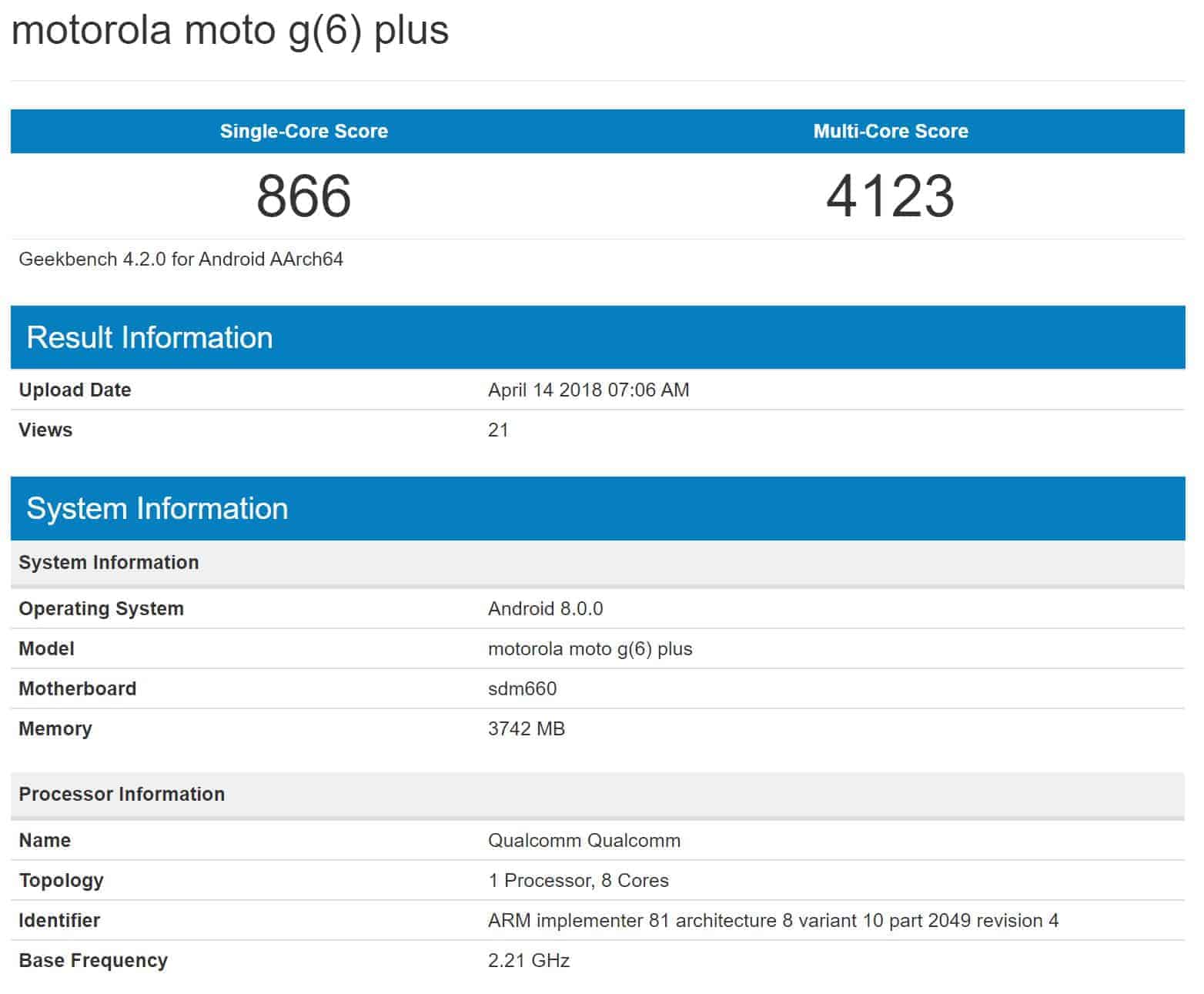