Meizu will announce three Meizu 15-branded smartphones in China on April 22, and spec sheets of those three devices have just surfaced. The three phones are expected to be called the Meizu 15, 15 Lite and 15 Plus, though this leak claims that the Meizu 15 Lite will be named the Meizu M15 after all, which is possible having the names of company’s previous devices in mind. We’ll have to wait for the launch event in order to be sure, but let’s refer to it as the Meizu M15 for now, shall we.

Having said that, specs of these devices leaked on a pamphlet of some sort, and most of the writing is in English, but we’ll try to decode at least some of it for your convenience. Let’s kick things off with the Meizu M15, shall we. That will be the most affordable Meizu 15-branded handset, and it will be fueled be the Snapdragon 626 64-bit octa-core SoC if this leak is to be believed. The device will pack in 4GB of RAM and 64GB of native storage, while it will feature a 5.46-inch fullHD (1920 x 1080) LTPS display. A 12-megapixel camera will be included on its back, a 20-megapixel camera will sit on the front, while a regular mTouch button will be implemented below the phone’s display. A 3,000mAh non-removable battery will also be a part of the package, while you will be able to utilize fast charging here as well, thanks to Meizu’s mCharge 9V/2A technology. It is also mentioned that the Meizu M15 will ship with Flyme 7, and the same can be said for the other two Meizu 15 devices, actually.

The Meizu 15 will be the middle-of-the-road model, and it will be fueled by the Snapdragon 660 64-bit octa-core SoC. The phone will sport 4GB of RAM, and it will arrive in 64GB and 128GB storage variants. The device will feature a 5.46-inch fullHD (1920 x 1080) OLED display, while 12 and 20-megapixel cameras will be included on its back. A 20-megapixel front-facing camera will also be included in this package, while this phone will also come with the mTouch button. A 3,000mAh battery will be included in the phone as well, along with Meizu’s mCharge fast charging. And last, but not least, the Meizu 15 Plus. This handset will be fueled by the Exynos 8895 64-bit octa-core SoC, and it will include 6GB of RAM. The phone will ship in 64GB and 128GB storage variants, while it will feature a 5.95-inch QHD OLED display. 12 and 20-megapixel cameras will sit on its back, while a single 20-megapixel camera will be included on its front side. A 3,500mAh battery will be included here, same goes for mCharge fast charging (12V/2A), and the mTouch key will sit below the display on the Meizu 15 Plus as well. 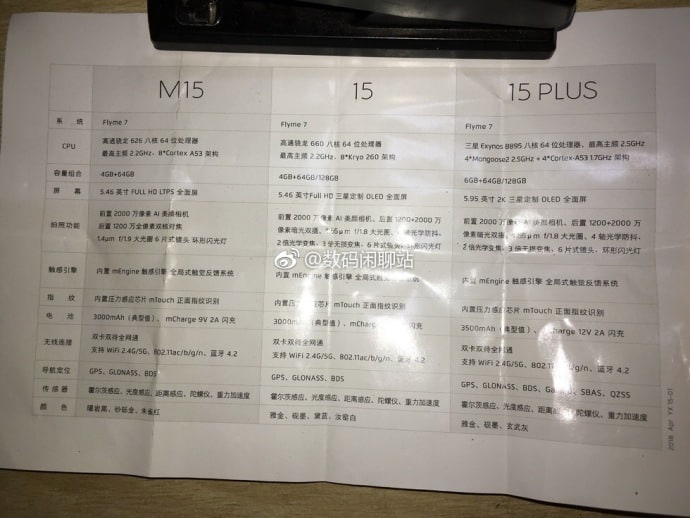