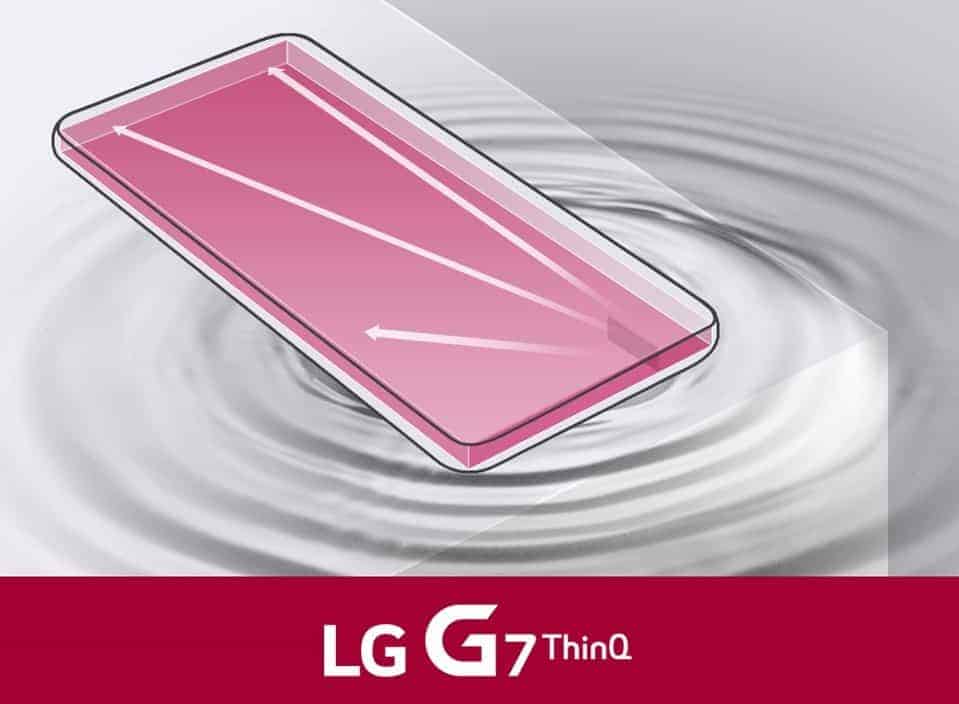 The LG G7 ThinQ, the company’s new flagship, will be announced on May 2, and the company has just confirmed some new details about the phone. LG Korea has just confirmed that the phone will ship with a ‘Boombox’ speaker which will offer ten times louder sound compared to regular smartphones, and a ton more bass as well (more than 6dB), which is twice as much bass compared to most smartphones out there, says LG.

That’s not all, though, LG also says that you will be able to further amplify the LG G7 ThinQ’s sound output and quality by placing the phone on a solid surface or box, as its Boombox speaker relies on a special resonance chamber design, which can use the phone’s whole body in order to provide a more quality, and louder sound output. The phone’s body basically works in favor of the phone’s loudspeaker. The LG G7 ThinQ will also ship with DTS:X support, which means it will offer 3D surround sound effects at up to 7.1, and that applies even if you’re using a regular set of headphones, you will notice the difference. The LG G7 ThinQ will also include a Hi-Fi Quad DAC, which will lower distortion rate to 0.0002-percent, and provide a clear sound output. It is worth noting that a similar Quad DAC was included in both the LG G6 and V30S ThinQ. The device will also support MQA (Master Quality Authenticated) standard, which will make it possible for the phone to output high-fidelity, high-quality streaming with little data capacity. LG actually utilized something similar in both the LG V30 and V30S ThinQ.

That is more or less all the info that LG released today, but it’s worth noting that the other day, the company confirmed that the G7 ThinQ will ship with a 6.1-inch QHD+ Super Bright Display, which will be able to hit 1000 nits of brightness, max. We’ve exclusively shared the LG G7 ThinQ renders a while back, confirming all color variants of the device. The phone will sport a display notch, while it will be fueled by the Snapdragon 845. The device will include a dual camera setup on the back, and if you’d like to know more about that, click here.