The HTC U12 Plus will be equipped with 8GB of RAM and 128GB of internal flash memory, or at least its most premium variant will be, according to a newly leaked spec sheet of the device originating from China. The handset will also boast “Edge Sense 2,” a new version of the pressure-sensitive frame the company introduced with the HTC U11 last year, allowing users to squeeze the edges of the Android flagship in order to launch apps or perform other actions such as taking a picture, depending on the current contents of their smartphone screen. The leak doesn’t clarify how Edge Sense 2 is meant to be an improvement over the original technology that also made its way to Google’s Pixel 2 and Pixel 2 XL, albeit advertised as Active Edge.

Qualcomm’s Snapdragon 845 will also be part of the HTC U12 Plus package, together with a microSD card slot supporting up to 2TB of external flash memory. No consumer-grade microSD cards with such capacities are yet available on the market, with 400GB being the upper limit of what can presently be purchased. While not every Android phone maker actively advertises support for storage solutions that don’t exist, HTC is expected to, having been eager to boast about the HTC One ME, its mid-2015 release said to be the world’s first smartphone supporting 2TB microSD cards. The upcoming flagship will also feature a 5.5-inch QHD+ display with an 18:9 aspect ratio and feature dual-SIM capabilities, though it’s presently unclear whether it will have a separate SIM card tray or utilize a Hybrid SIM setup, i.e. make users choose between a second SIM card or a microSD one.

Two 8-megapixel cameras will sit on the top bezel of the handset, with its rear plate featuring a 12-megapixel sensor mounted behind an f/1.5 lens, as per the same source. The HTC U12 Plus will sport IP68-rated elements resistance and be bundled with HTC’s USonic earphones boasting noise cancelation capabilities, the leak indicates, while also mentioning support for Qualcomm’s Quick Charge 4.0, wireless charging, NFC, and Dolby Audio-enabled Boom Sound. The HTC U12 Plus is expected to be announced in early May and start retailing on a global level shortly afterward. 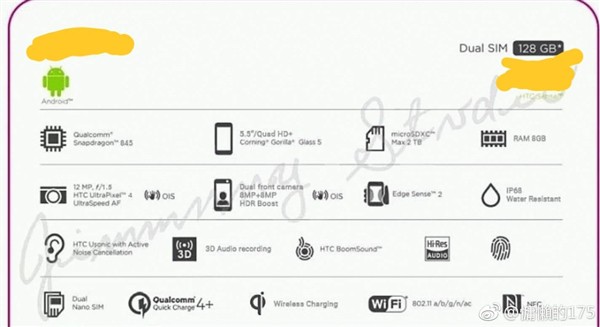