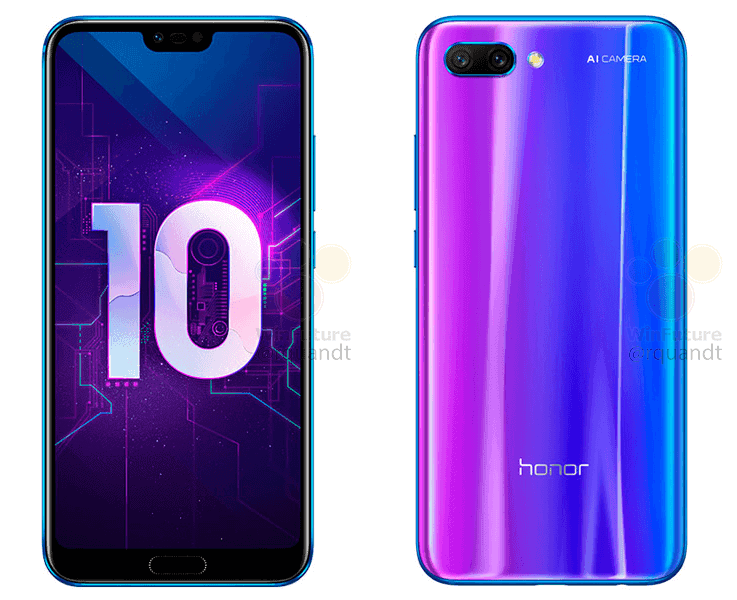 A real-life image of the upcoming Honor 10 flagship surfaced earlier today, and the phone's seemingly official renders have just appeared as well. WinFuture has just released a bunch of renders of the Honor 10, showing off the phone's various color options. As you can see, the phone will be made out of metal and glass, just like its predecessor, while it will sport a dual camera setup on the back. A display notch is a part of the package as well, and a fingerprint scanner sits below the phone's display. This handset actually resembles the Huawei P20 quite a bit, especially when you look at it from the front.

The phone's display notch is considerably smaller than iPhone's, and all the physical keys sit on the right-hand side of the device. The term 'AI camera' is placed on the back of the phone, which suggests that the camera will use Kirin 970's AI capabilities, along with software implementations that will ship with the device. Based on the provided images, the Honor 10 will be available in Black, Gray Green, and some sort of a gradient option, it seems like a combination between, blue, purple and pink colors. The Honor 10 will include a 5.84-inch fullHD+ (2280 x 1080) display, says the source, and we're looking at an LCD panel here, with a 2.5D curved glass on top of it. Interestingly enough, the source claims that the Honor 10 will include 20 and 24-megapixel cameras on the back, which conflicts with the info shared by TENAA (China's equivalent to the FCC), as TENAA reported that the device will come with 16 and 24-megapixel rear-facing cameras.

A 24-megapixel camera will be included on the phone's front side, and the device will be fueled by Huawei's flagship SoC, the Kirin 970. The device will be released in both 4GB and 6GB RAM variants, which will arrive with 64GB and 128GB of native storage, respectively. Android 8.1 Oreo will come pre-installed on the device, while Huawei's Emotion UI (EMUI) 8.1 skin will sit on top of Google's OS. A 3,320mAh battery will also be a part of the package, and the device will weigh 153 grams.