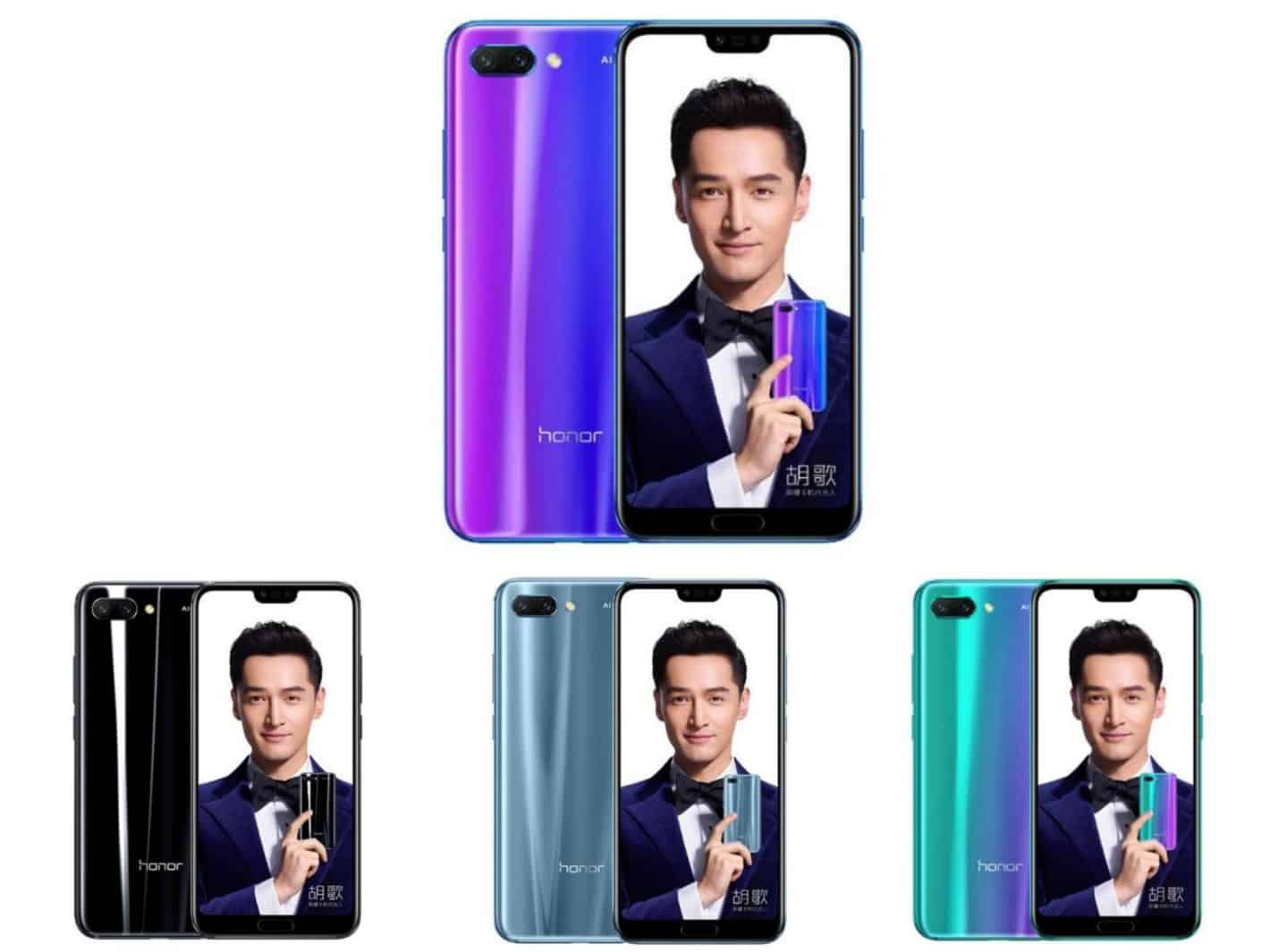 The Honor 10 is basically a blend between the Honor 9 and the Huawei P20 as far as the design goes, while it utilizes Huawei’s most powerful SoC, and an interesting dual camera setup on the back, which is backed by AI.

Honor is Huawei’s sub-brand, but it’s a completely separate company which has had plenty of success in recent years. Honor’s smartphones have been quite popular in certain regions, especially in Asia and Europe, as they’re usually considerably more affordable than Huawei-branded handsets, and they have plenty to offer. The Honor 8 and Honor 9 were the company’s compact flagship phones in 2016 and 2017, while the Honor V9 and Honor View 10 are the latest large flagships the company announced. Having said that, Honor has just introduced the Honor 10 in China, the phone that has been leaking online for a long time now. This handset is basically a blend between the Honor 9 and the Huawei P20, and you’ll see why later on, as we get to talk more about its design. The Honor 10 actually arrive in a couple of different variants, and it’s worth noting that its global launch will follow on May 15, that is something that Honor already announced a while back. Having said that, let’s talk more about the Honor 10, shall we, starting with its specifications.

The Honor 10 is more or less Honor’s variant of the Huawei P20, so its specifications are somewhat similar to those on the Huawei P20. The Honor 10 is fueled by the same processor as the Huawei P20 and P20 Pro, the Kirin 970, which is the most powerful SoC in Huawei’s lineup at the moment, and it also fuels the Honor 10’s larger counterpart, the Honor View 10. The Honor 10 is still quite compact, but it sports a significantly larger display than its predecessor, it comes with a 5.84-inch fullHD+ (2280 x 1080, 432ppi) IPS LCD display, but its bezels are considerably thinner than on its predecessor, which means it’s still quite compact. The Honor 10 comes in two storage variants, which come with the same amount of RAM. The Honor 10 comes with 6GB of RAM, with 64GB or 128GB of storage, depending on which variant you decide to get, and this is expandable storage we’re looking at here.

A 3,400mAh non-removable battery is included in the Honor 10, while Huawei’s proprietary fast charging is also a part of the package. Android 8.1 Oreo comes pre-installed on the Honor 10, while you will find Huawei’s custom UI on top of it, Emotion UI (EMUI) 8.1. The Honor 10 features two cameras on its back, 16-megapixel (f/1.8 aperture) and 24-megapixel (f/1.8 aperture) snappers, though Leica’s lenses are not a part of the package here, as the Honor 10 is considerably more affordable than the P20 and P20 Pro. A 24-megapixel camera (f/2.0 aperture) is included on the phone’s front side, and a fingerprint scanner sits below the phone’s display. This handset offers facial recognition technology as well, and it utilizes its front-facing camera in order to scan your face. The Huawei 10 measures 149.6 x 71.2 x 7.7mm, while it weighs 153 grams, and it was announced in Blue, Black, Gray, and Purple color variants. Bluetooth 4.2 is also included in the package, while the phone supports 4G LTE connectivity, both TD-LTE (B34/B38/B39/B40/B41) and FDD-LTE (Bands B1/B3/B5/B8). Needless to say, this applies to the Chinese variant of the phone.

The Honor 10, as already mentioned, resembles the Huawei P20 quite a bit, but it actually looks most like a cross between the Honor 9, its predecessor, and the Huawei P20, one of Huawei’s flagships. The device is made out of metal and glass, its frame is made out of metal, while two sheets of glass are placed on each side of it. The Honor 10 has that reflective back side, which looks really staggering when the light hits it from a certain angle, and Honor actually announced a two gradient color variants of the phone, much like the Twilight version of the Huawei P20. The back side of the Honor 10 is slightly curved, so that it sits in your hand better, and the phone sports a display notch as well, for better or for worse. That display notch is quite similar to the one on the Huawei P20, it’s noticeably smaller than the iPhone X’s display notch, that’s for sure. There are two cameras on the back of the Honor 10, and they’re horizontally aligned, while you will notice an LED flash next to them as well. The phone sports a front-facing fingerprint scanner, which also doubles as the phone’s home key, while Honor also lets you utilize it as a touchpad for gestures, which is another way of navigating the device, and all that can be altered in settings. All the physical keys sit on the right-hand side of the Honor 10, while you can access the phone’s SIM cards on the left. An IR blaster is placed on the very top of the device, while the phone’s loudspeaker sits on the bottom, where you will also find a Type-C USB port for charging. The phone comes in Blue, Black, Gray, and Purple color options.

The Honor 10 features a dual camera setup on the back, and a single camera on its front side. Unlike the Huawei P20, its rear-facing cameras are vertically-aligned, and they are not flush with the phone’s back, which was to be expected considering that the Honor 10 is really thin at 7.7mm. In any case, the Honor 10 features 16 and 24-megapixel cameras on the back, the phone’s 16-megapixel camera utilizes an RGB sensor, and it comes with an f/1.8 aperture, while PDAF is also included in the package. A 24-megapixel monochrome camera sits next to the phone’s main snapper, and it features an f/1.8 aperture. Needless to say, the Honor 10 can take black and white images thanks to that monochrome sensor, but the main point of including it here, is so that it can work in collaboration with the main RGB sensor in order to balance out images. A single LED flash is placed on the back of the Honor 10, and the phone supports 4K video recording, while you can shoot fullHD video with the phone’s front-facing shooter. Speaking of which, a 24-megapixel camera is included on the phone’s front side, and it features an f/2.0 aperture. Honor talked quite a bit about AI during its press conference in China, as Huawei’s Kirin 970 chip actually comes with a dedicated NPU, and the phone does rely on AI when it comes to the performance of the phone, and also the performance of its cameras. Honor has included quite a few different modes in the Honor 10’s camera app, ranging from various stickers, an AR mode, portrait mode, something called ‘3D Creative Shooting’, panorama mode… and so on. You can also take time-lapse photos using the device’s cameras, while slow-motion video is also a part of the offering, though not all the details were shared.

The Honor 10 comes with a 3,400mAh battery, which is not removable, in case you were wondering, and that battery offers support for 5V/4.5A fast charging, which is Huawei’s in-house fast charging technology. Having said that, the Honor 10 does ship with a 5.84-inch fullHD+ display, and a power efficient Kirin 970 SoC, so the battery life should be really good, at least it seems that way based on the phone’s components, though it will all depend on how well Honor optimized the Honor 10’s software. The Honor 10 comes with Huawei’s Emotion UI 8.1 skin, which is installed on top of Android 8.1 Oreo, which should be well-optimized by Google already. It’s not exactly a secret that Huawei includes quite a few battery-related features in its software, so you will get a number of ways to preserve battery via software, as you’ll be able to block certain apps, choose various battery-saving modes, and so on. We do not have any projections as far as battery life is concerned at the moment, but it will all depend on your usage anyhow, so company’s projection are not what matters here, really.

Android 8.1 Oreo comes pre-installed on the Honor 10, and on top of Google’s operating system, Honor has included Huawei’s custom skin called Emotion UI, to be more specific, this is Emotion UI (EMUI) 8.1 we’re talking about. Now, ever since Huawei released EMUI 5.0, its skin looks a lot more like stock Android, as previous versions were heavily inspired by iOS. That being said, in EMUI 8.1 you’re getting more or less every stock Android feature, though EMUI 8.1 does look a bit different than stock Android, as Huawei re-arranged some things, so its menus look different, while the skin comes without an app drawer by default, but you can change that in the settings. Regular notification shade is here, even though it has a different skin on it, Quick Reply is also present and so on, basically all the stock Android features you may want. Emotion UI does bring its own features to the table, though, so you can, for example, change the way you navigate the Honor 10, as you can turn on gesture navigation which will utilize the phone’s fingerprint scanner / home key, and let you use just that one key to navigate the device, instead of the regular navigation buttons which are also available. Some gestures are also available on the device, as you can use knuckles to perform certain actions, and so on. There are plenty of options in Emotion UI, and the latest version seems to be extremely stable based on the build that is included on the Huawei P20 and P20 Pro, at the very least.

As far as security is concerned, Honor made sure to include various authentication methods on the Honor 10. Like pretty much every Android handset out there, you have your regular PIN and pattern unlock methods, and in addition to that, a fingerprint scanner is included on the device as well. If you’re not prone to using a fingerprint scanner, Honor has included facial recognition tech here as well, which utilizes the phone’s front-facing camera in order to scan your face. Honor claims that its tech is quite fast, and that it works well in low light as well, though that fingerprint scanner that is included below the display remains the most secure way to unlock your device, as it’s more reliable than facial scanning, as expected. Honor did not include any fancy facial scanning tech into the Honor 10, at least as far as hardware is concerned, as the phone is using its front-facing camera without any specialized sensors as on the iPhone X, which is why the fingerprint scanner is more secure, as is the case on most other Android phones which offer facial scanning.

As this is China model’s announcement of the phone, availability and pricing info is available only for the Chinese market, of course. Having said that, Honor did release detailed info when it comes to the device’s availability, and the phone’s China pricing also gives us a good idea as to how much will the phone cost elsewhere. In any case, the phone’s 6GB RAM variant with 64GB of native storage is priced at 2,599 Yuan ($414) in China, while its counterpart with 6GB of RAM and 128GB of storage costs 2,999 Yuan ($478). Registrations for the first sale of the Honor 10 kicks off today, and the phone will become available for purchase (as part of a flash sale) on April 27, the sale itself will commence at 10:08AM (local time). The phone will be available via vMall, Tmall, Suning, and some other stores in China.