Established French audio company Focal already made a name for itself in the consumer electronics segment with a number of popular devices it used to branch out in recent years, with its products coming in the form of both headphones and earphones, though most of them share one denominator – a design targeted at offering a premium listening experience at a price that the average user will still be willing to consider. Last year’s Listen Wireless headphones were no different, having debuted as a Bluetooth-enabled alternative to Focal’s original Listen line, with the latest Listen Wireless Chic series now seeking to brighten things up with some new colors – Blue, Olive, and Purple.

While certainly pretty to look at, the $300/€249 price tag attached to the Listen Wireless Chic family is far away from the impulse purchase territory and is worth deliberating. That’s precisely what this review is here for as we’ll take an in-depth look at every aspect of Focal’s latest pair of Bluetooth headphones so as to answer the ultimate question – are they worth it? 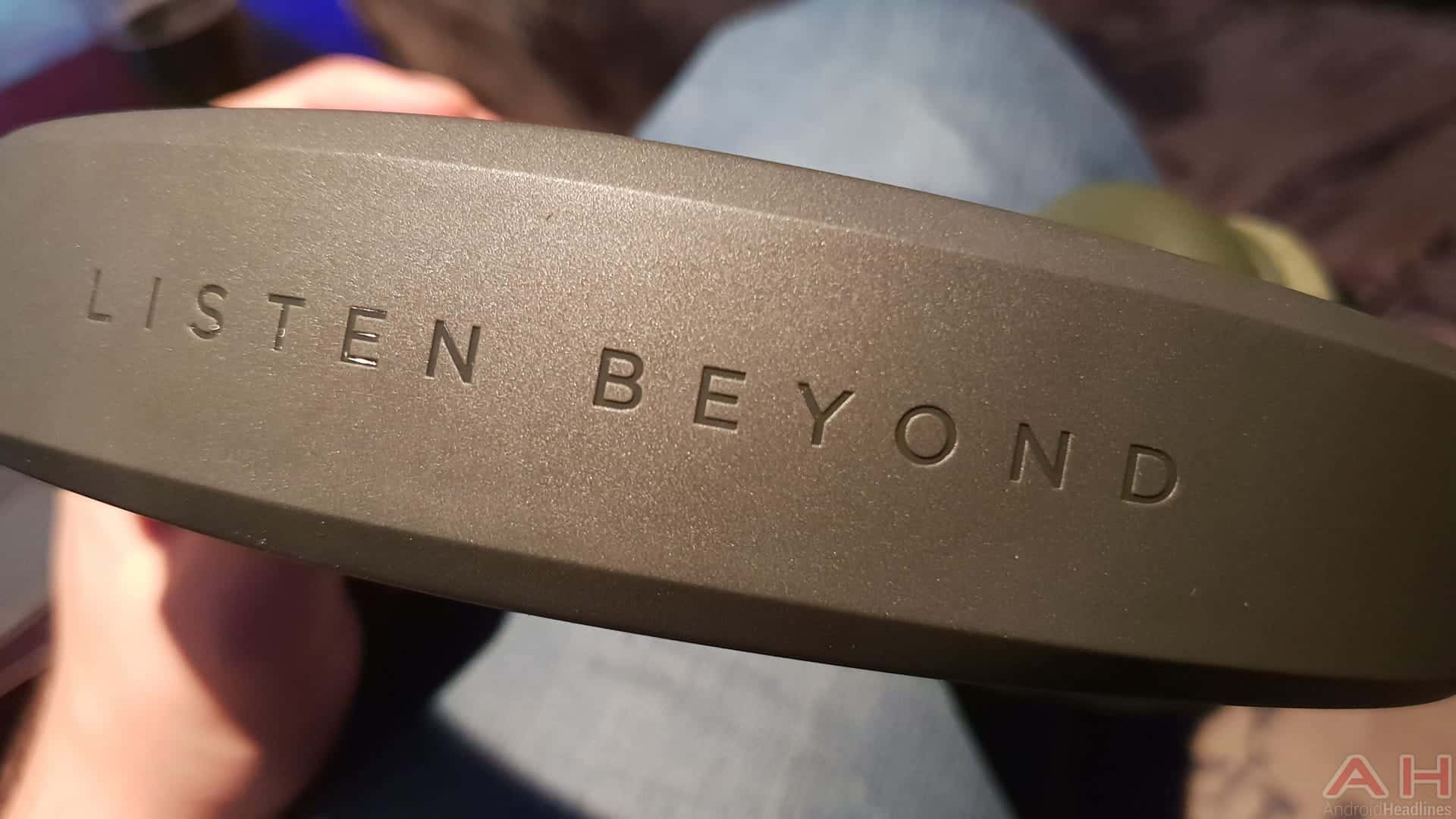 A product that’s part of this particular price bracket comes with certain expectations when it comes to specs and the Listen Wireless Chic headphones certainly don’t disappoint in that regard. The gadget is equipped with a 40mm electrodynamic Mylar Titanium driver, two omnidirectional microphones with the ability to eliminate background noise during voice capture, and has a frequency response in the range of 15Hz to 22kHz. Its passive mode impedance sits at 32 ohms with a sensitivity of 122 decibels of sound pressure level at 1kHz – / 1Vrms. In other words, these headphones are pretty efficient and will benefit from an amplifier with a low-voltage swing. The Listen Wireless Chic lineup retains the Bluetooth 4.1 capabilities of the original series, meaning its effective range still goes up to fifteen meters, i.e. just under 50 feet. As Bluetooth 4.2 headphones are already widely available for purchase, some even at much lower prices, this particular connectivity feature is a sole blemish on the otherwise impressive spec sheet boasted by the Listen Wireless Chic line.

Listen Wireless Chic: In The Box 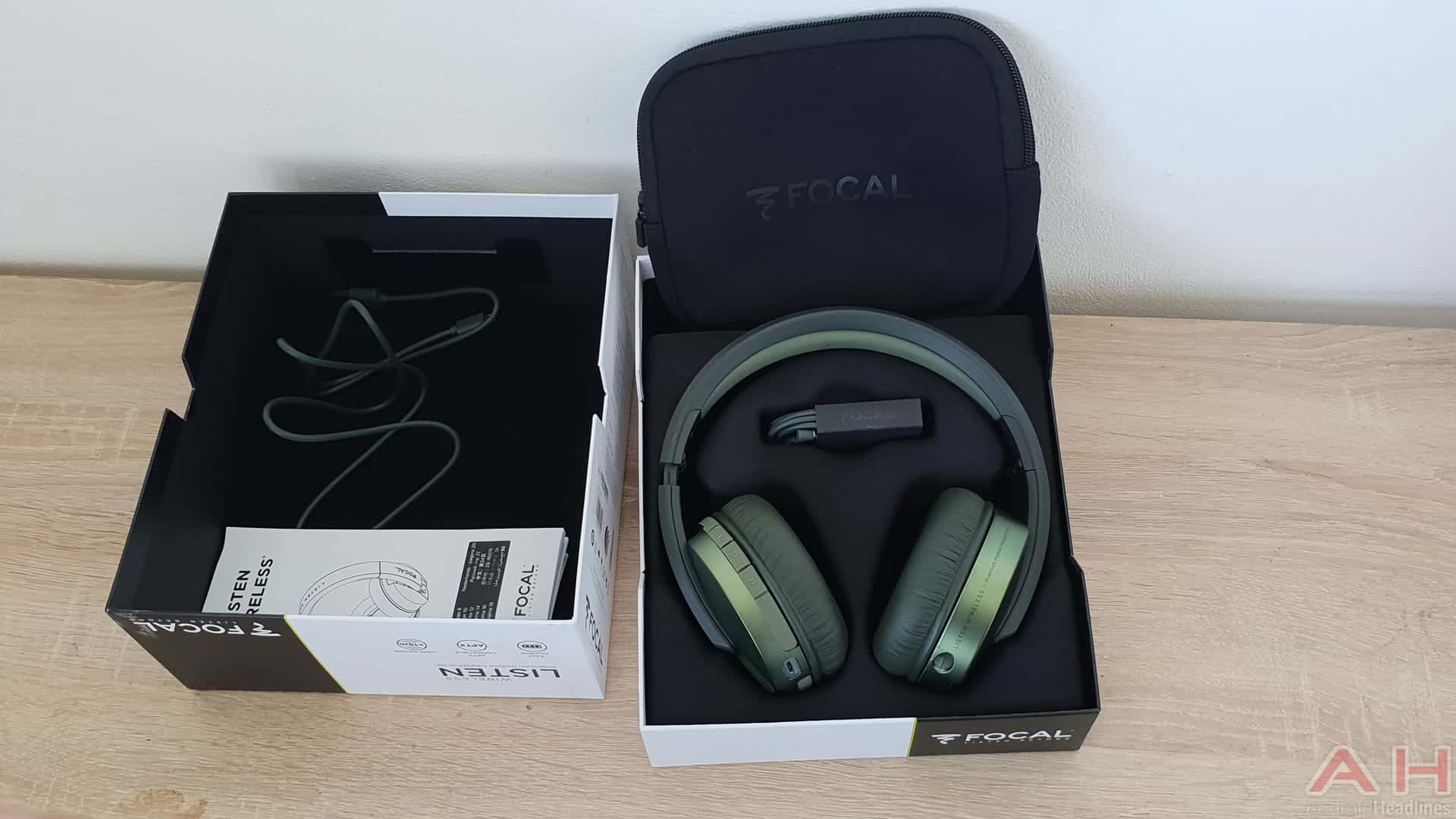 Focal’s packaging has historically been relatively lightweight and that’s once again the case with the Listen Wireless Chic headphones. Besides the product itself, the Listen Wireless Chic box comes with a Micro-USB charging cable, another detachable cable with a mini 3.5mm audio jack input, and a carrying case. Naturally, obligatory paperwork is also part of the package, as is a user manual that’s actually surprisingly succinct and truly lives up to its “Quick Start” moniker. In fact, when it came to learning the difference between having the headphones search for compatible devices and just having them be discoverable so that the other device can be the one that initiates the pairing process, I actually would have preferred a slightly meatier manual as I had to learn by trial and error. Luckily for you, we’ll cover that in a bit so that you’re able to get started with the Listen Wireless Chic headphones right away should you choose to buy them. 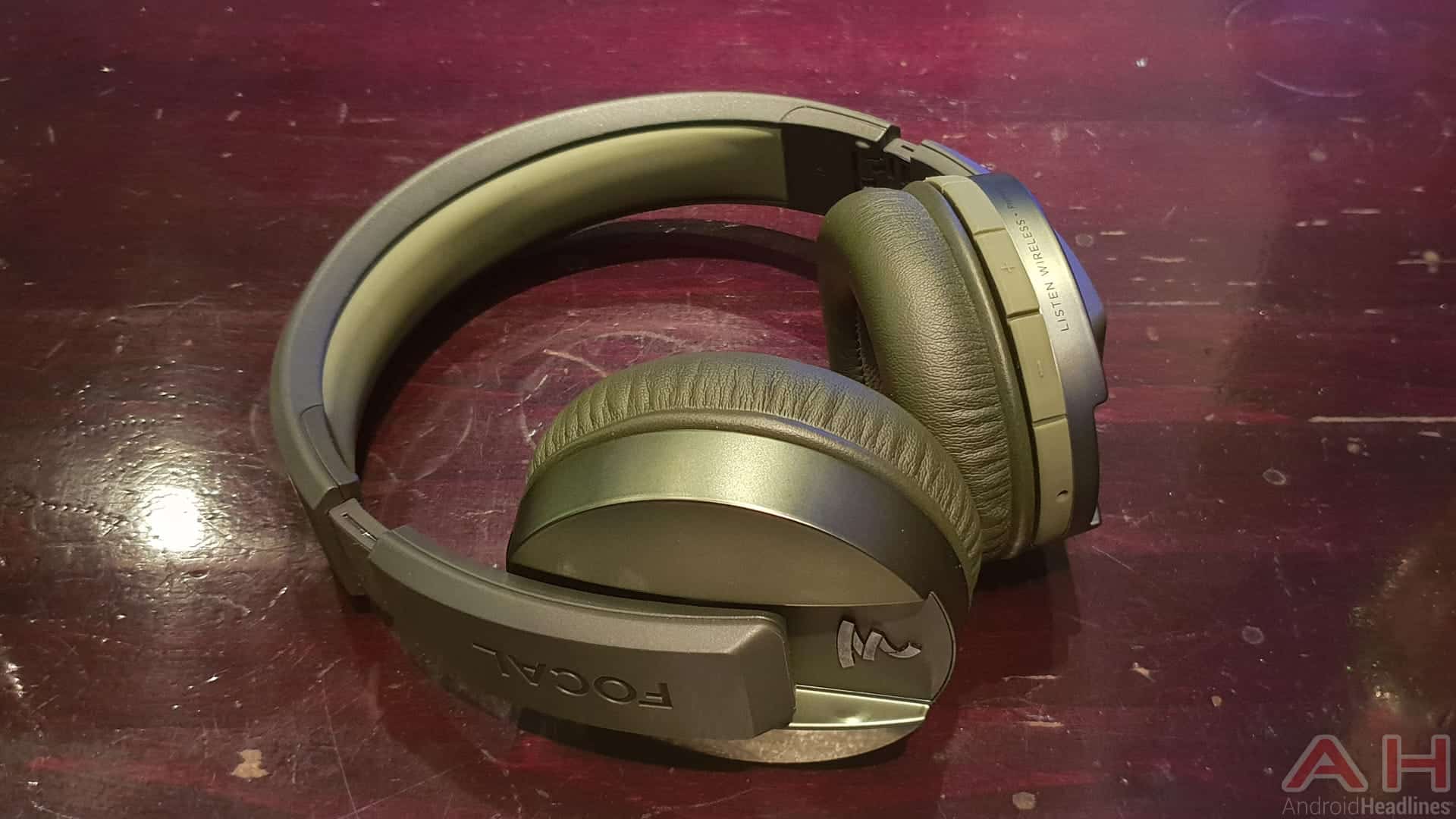 Succinctly speaking, the Listen Wireless Chic look incredible and feel premium to wear, though it’s a shame Focal hasn’t opted for a build that’s at least partially metal. That’s not to say this device isn’t sturdy because it can not only survive significant abuse but is even incredibly flexible precisely because of its plastic body, with the overall offering also being rather elegant-looking; it’s just that there’s no way some consumers won’t take them in their hands and instantly conclude they aren’t paying $300 for a pair of plastic headphones, regardless of the fact that many offerings at this price point come with largely or entirely plastic builds and the Listen Wireless Chic headphones are significantly better than pretty much every equally priced alternative, all things considered.

At 300 grams, these headphones are a bit on the heavier side when held in hand but they distribute their weight incredibly well and you could swear they’re much lighter when actually wearing them. The non-conductive metallization finish on the ear shells is also a nice touch, whereas the 22mm thick heat-sensitive memory foam that perfectly adjusts to the shape of your ear just screams “premium” at you. Even the plastic parts are extremely sturdy and built much better than what many consumers would normally associate with that material. Extending and retracting the headphones from the headband is super simple to do, and all physical buttons present on the Listen Wireless Chic line are rubberized so as to offer extra protection. In overall, the only complaint regarding the general build and design of the Listen Wireless Chic headphones you could objectively make is “why aren’t they made of metal” – but try them on and you’ll see why. 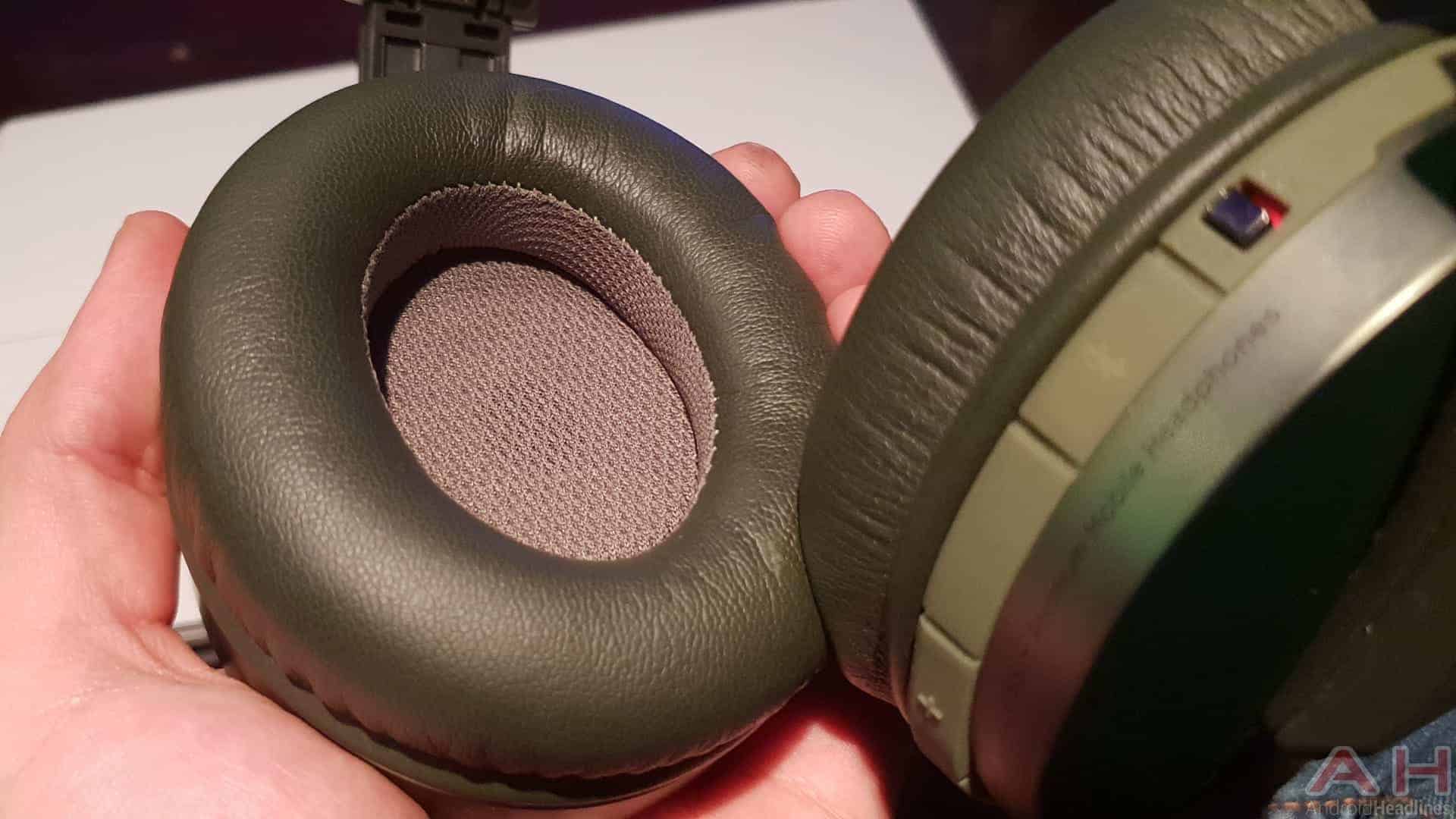 Focal is an established name in the audio industry even if its beginnings aren’t deeply rooted in consumer electronics, at least not in the context of products that mere mortals consider affordable. The Listen Wireless (Chic) lineup still manages to offer the best of both worlds, delivering an incredible audio experience at a price that’s certainly not small but may start seeming as such once you spend some time with the headphones. I’m far from the biggest audiophile on the planet but I’ve been lucky enough to try out a fair few headphone models advertised as “premium” offerings over the years and while the Listen Wireless Chic family isn’t even the best Focal-made product I ever heard, it’s sure up there in the context of truly wireless solutions, especially at this price point. In fact, I’d be hard-pressed to point out any glaringly obvious differences between Focal’s latest product and something like the Sennheiser Momentum 2.0 Wireless in terms of audio quality, even though the latter gadget is $200 more expensive.

Focal hence managed to create a device that’s close to the point of diminishing returns but doesn’t exceed it, offering what’s arguably the best wireless listening experience in the sub-$300 segment. The bass, mids, and treble are all well-defined, consistent, and generally offer an immersive sound. Naturally, while delivering what’s likely the new best option in its price bracket, Focal hasn’t broken any new ground in terms of wireless audio quality in general, even with aptX support. Just plugging in the Listen Wireless Chic headphones via a 3.5mm audio jack already delivers better tone definition and a slightly less distracting yet cleaner treble, and comparing them to most similarly priced, wired-only options doesn’t really make sense as they’ll rarely match them and never exceed them in any aspect unless they themselves are used over a wired connection. Still, if you’re in the market for a truly wireless listening solution, you should already know that you’re making some trade-offs by not going the traditional route, regardless of the money you’re willing to spend, and Focal deserves praise for actually providing you with the ability to plug in the Listen Wireless Chic and enjoy an even better audio experience if you so choose to, which is something that many manufacturers aren’t willing to do with their Bluetooth products. In the context of wired audio quality, the Listen Wireless Chic can certainly go head-to-head with anything else in this price range. Microphone quality is also adequate and I’ve experienced zero issues with this performance aspect of the headphones over close to a month of use. 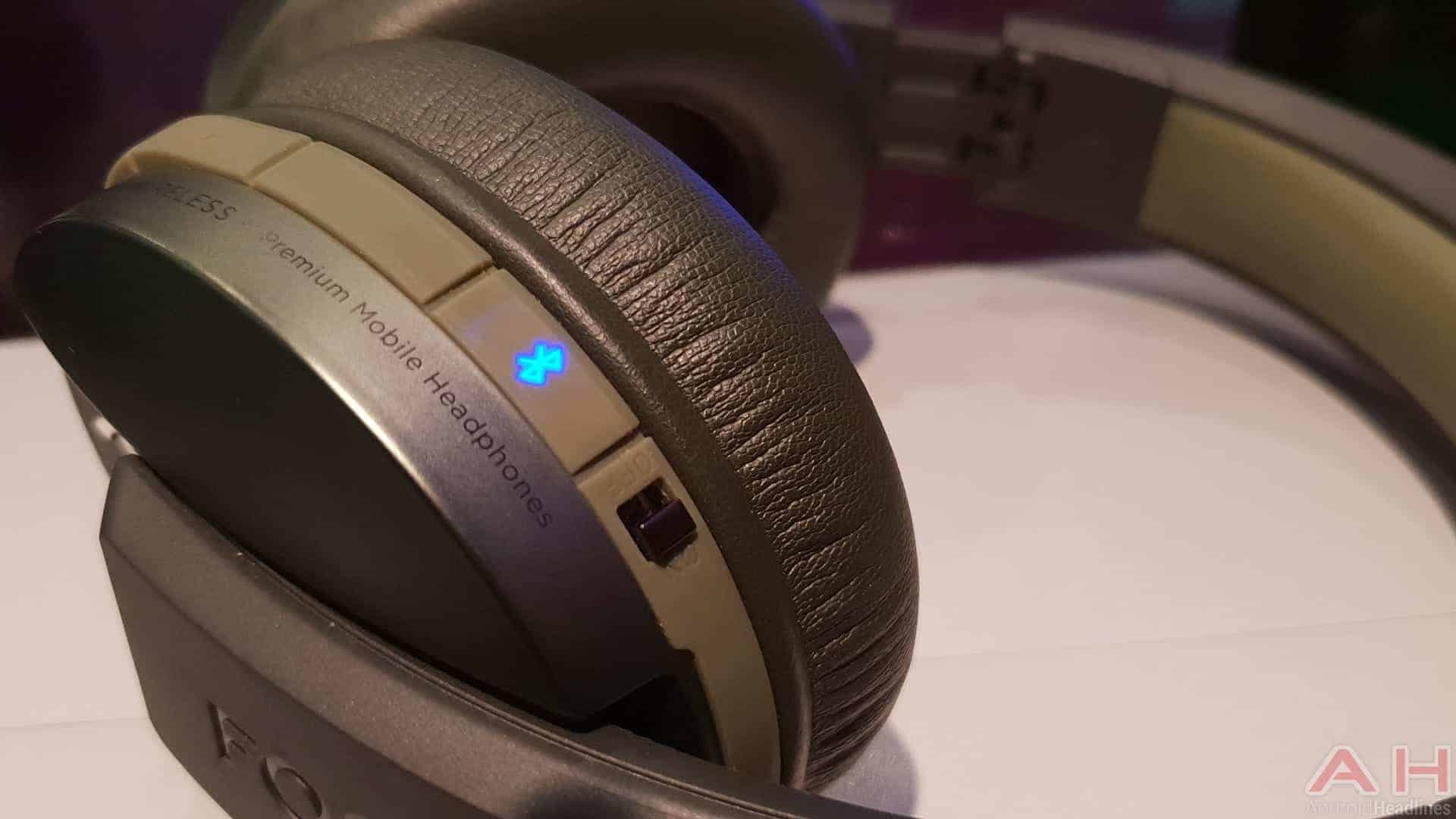 I’ve tested the Listen Wireless Chic headphones with the Samsung Galaxy S9 Plus, Microsoft Surface Pro 4, Sony PlayStation 4 Pro, and one of Samsung‘s 2017 4K UHD TV models (MU6100). The first two devices managed to pair basically instantly, whereas the Samsung TV and Sony’s console required some experimentation as they haven’t automatically recognized the gadget. As it turns out, I had to place it in a discoverable mode instead of just pressing the Bluetooth button and letting the headphones be the ones that do the searching. Doing so is as simple as just holding the Bluetooth button while having your TV or anything else perform a Bluetooth search, it’s just a shame the user manual doesn’t mention that. Once I came to that realization, the actual pairing process was just as straightforward and quick. Subsequent connections are established in a matter of seconds, though there doesn’t appear to be a predictable order of pairing if you activate the headphones while having multiple Bluetooth devices turned on in the vicinity seeing how the gadget automatically attempts to connect to something as soon as it’s powered on with varying results.

In terms of battery life, Focal claims the Listen Wireless Chic line lasts up to 20 hours on a single charge and after several weeks of testing, that seems about right. Granted, I never hit the 20-hour mark but I came as close as somewhere between 17.5 and 19 hours, which is still better than the difference between real-world and advertised performance of the vast majority of other battery-powered audio offerings on the market. The headphones are recharged over a Micro-USB cable and only take some two hours to fully replenish their maximum energy level after being depleted, which is in line with what consumers have come to expect from premium products in this category.

Next time someone asks me why would anyone pay $300 for a pair of wireless headphones, I’ll probably just make them wear the Listen Wireless Chic for a few minutes instead of trying to explain myself. They feel good, sound incredible, are compact, flexible, quick to connect to anything, and last for days even with aggressive use while still only needing a couple of hours for a full recharge. Are there even better options on the market in terms of pure quality? Absolutely, but none below the $300 mark, and even the $299 price tag is already dangerously approaching the territory of diminishing returns where paying 50-percent more won’t get you a product that’s anywhere near 50-percent better. So, if you’re an enthusiast in the market for a pair of quality truly wireless headphones and are willing to pay good money for them but don’t want to overdo it, the Listen Wireless Chic lineup is the ultimate combination of price and luxury that the audio industry can currently offer. Better yet, you’re still getting a 3.5mm audio jack with this Focal-made solution, so if you want to go wired for an even more defined audio and generally better listening experience, that’s always an option as well.