Facebook has created a dedicated page on its help center intended to help users check whether or not their data had been affected by the Cambridge Analytica data breach. The new help page is quite straightforward in explaining to users if their information was shared with the British data mining and political consulting firm via a personality quiz app called “This Is Your Digital Life”. The app was developed by Aleksandr Kogan, a Russian-American professor who acquired a large volume of information from the social networking site under the pretext of academic research and turned over the trove of data to Cambridge Analytica, a move that violates Facebook’s privacy policies.

Cambridge Analytica then reportedly used the data of around 87 million users, based on Facebook’s current estimate, as part of an effort to boost the presidential bid of Donald J. Trump during the 2016 U.S. elections. The massive data misuse prompted several regulators from the European Union, United Kingdom, United States, and Australia, among others, to launch investigations into the data privacy practices of the social media titan. Most recently, Facebook co-founder and Chief Executive Officer Mark Zuckerberg testified before the U.S. Senate’s Commerce and Judiciary committees on Tuesday for approximately five hours to shed light on the controversy. The 33-year-old multi-billionaire answered repeated questions over how the Menlo Park, California-based company makes money and handles the data of its more than two billion users. Mr. Zuckerberg, however, failed to provide unambiguous answers to several queries including the question on the possibility of introducing a paid subscription service that would let people continue to use the social networking site without having any of their data collected or mined. In the end, the Senate inquiry revealed little information about Facebook’s core operations and its plans post the Cambridge Analytica scandal.

The help page is part of Facebook’s way to address the data breach and make amends for its lack of strict privacy policies. Late last month, Mr. Zuckerberg announced a number of changes the company wants to introduce to its platform as part of a renewed effort to beef up its user data protection measures. Among others, Facebook said it would probe apps that may have had access to a trove of user data and may be suspected of any improper activity. 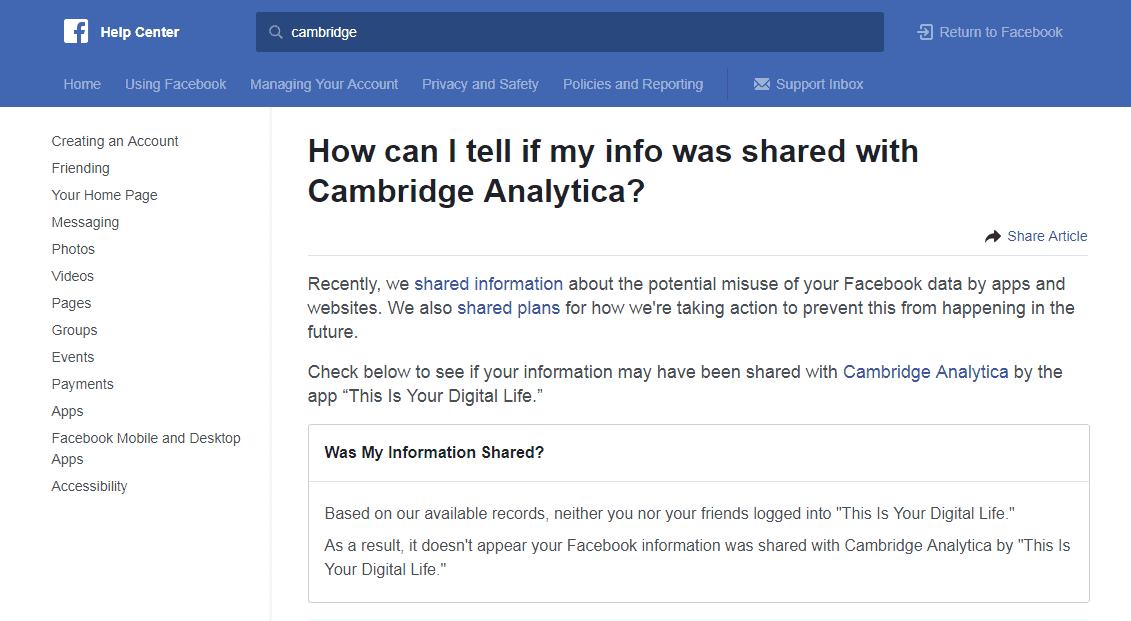