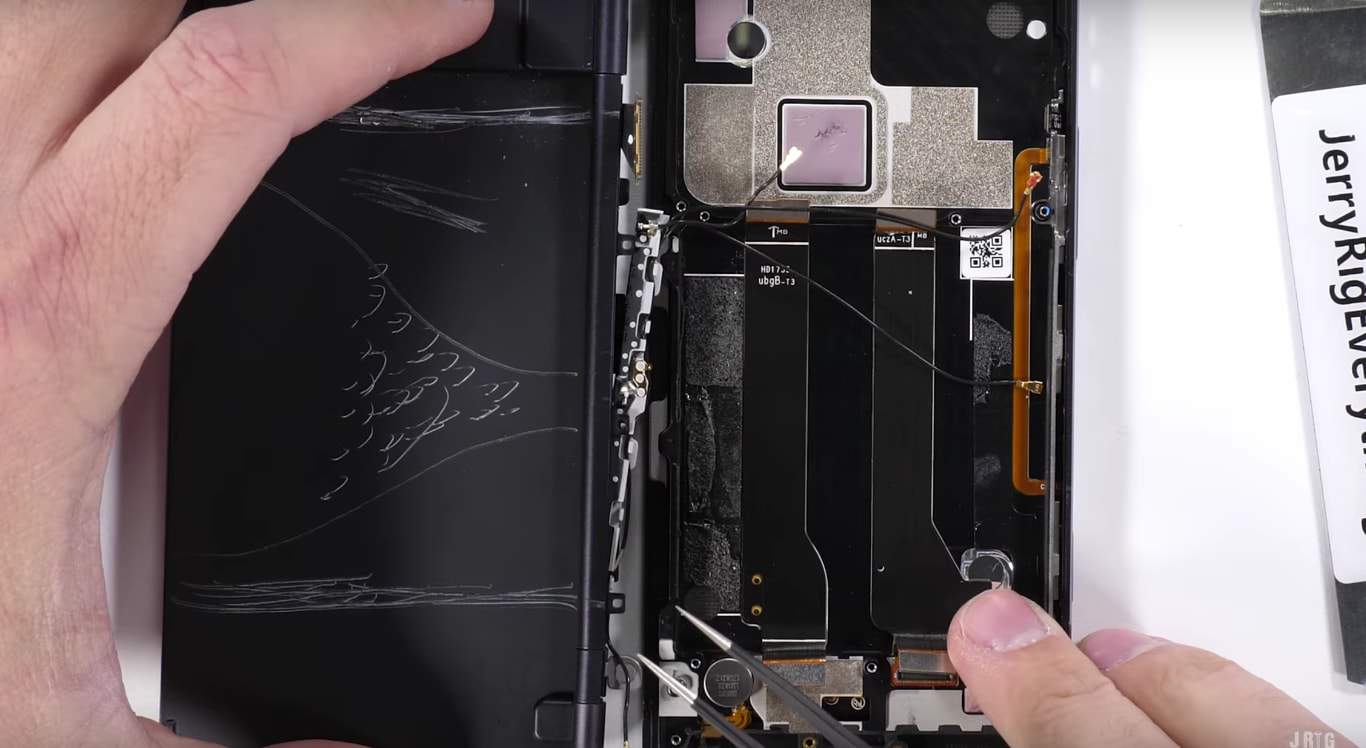 The YouTube channel JerryRigEverything’s Zack Nelson has now uploaded a video teardown to reveal the internal setup of ZTE’s Axon M. The highlight of the video is the section which shows off how ZTE has the two screens connected. However, Nelson starts off this particular video, included below, taking a different approach. That’s because a subscriber had asked via YouTube’s comments whether or not two applications could use the single built-in camera simultaneously. Interestingly, that doesn’t seem to be something that had been thought of by the YouTuber, so he begins by addressing that. For now, it seems as though only one active piece of software can use the camera, even if a different app is opened on each screen. As Nelson points out, however, pending some unforeseen hardware limitations, such a feature could be added via future updates.

Getting back to the video itself, it plays out much like a teardown video always does. The screen of the Axon M is glued into place from the front, which is the standard practice for OEMs, so the teardown starts at the back with the phone unfolded. After removing six screws from the main display, the back panel comes away fairly easily and many components under that are held in place by lego-style connectors. There are actually very few screws anywhere else. The first two hold the battery in place and several more hold down the cover for the Axon M’s speaker, vibration motor, and USB charging hardware. After unplugging and moving through the rest of the usual components and wires, Nelson finally gets to the second screen, which is held in place by two screws and a unique mobile wiring solution. The hinge of the device actually acts as a protective barrier to the cables powering the display and the primary plug on that has been reinforced to withstand constant bending. That includes individually wrapped, insulated wires in place of the more typically used ribbon wires. In fact, the whole setup is similar to some multiscreen computer systems and could easily be doubled up to create a three-screen smartphone.

Effectively, the effort put into the internal hinge components matches up really well that of its external build. That’s based on an earlier external durability test of the ZTE Axon M, also uploaded to the JerryRigEverything channel, showing the amount of serious abuse it can withstand. The scars of that test are clearly visible throughout the teardown but the device still appears to be running very well – highlighting yet again how durable this device is. Of course, that doesn’t mean that just anybody should try this at home under most conditions. Unless users are prepared to deal with the consequences of a botched repair, it’s probably a good idea to leave this kind of thing up to the professionals. With that said, this does look like one of the most well-thought-out Android handsets to be released to date in terms of being designed for durability.