According to a report out of FactSet, Amazon spent $22.6 million on R&D (Research and Development) in 2017, which puts it at the top of the list of US companies – beating out Alphabet, Intel, Microsoft and Apple who made up the top five. The top five on the list were all tech companies, followed by some healthcare companies like Johnson & Johnson and Merck. Towards the bottom of the list are Qualcomm and IBM, which is actually a bit surprising. Particularly when it comes to Qualcomm, seeing as it has been leading the way with 5G and newer, faster mobile processors.

Amazon outspent Alphabet by nearly $6 billion last year, which is a bit surprising. But Amazon has also been building new hardware, and sinking a lot of cash into Alexa, especially after how popular Echo devices were last year. Amazon’s Lab 126 is likely the big culprit here when it comes to R&D, as that is where all of Amazon’s hardware is made – including its tablets. However, Amazon likely spent a good amount on its cloud business, AWS. Of course, there is also Amazon Go, its own grocery store that doesn’t have checkout lanes. That likely used up a good amount of Amazon’s R&D budget, seeing as its public opening was pretty delayed, likely due to some more testing needing to be done here.

R&D is an important measure for determining what direction a company may go in the future. R&D is needed for innovation and new products, and without innovation, it makes it tougher for a company to compete. And when a company can’t compete, it means that it’ll be tougher for the company to stay in business – as we’ve seen with companies like Nokia and BlackBerry in the past few years. Companies have been spending more money than ever on research and development, and the amount continues to climb each and every year. In 2016, for example, Facebook was number 13, and in 2017 it moved up to ninth, spending around $7.8 billion in the fiscal year. 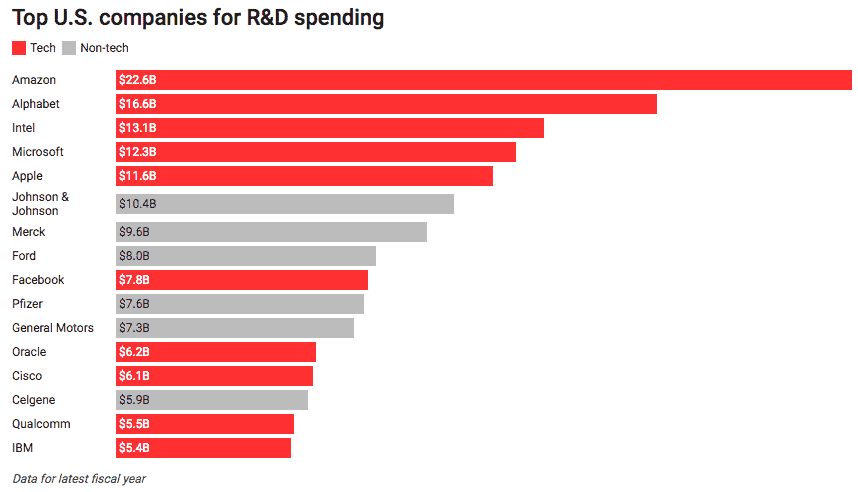