Xiaomi recently announced a wider release of its MIUI 9 Global Stable ROM on additional smartphone models, and following this new software distribution phase the package which was originally rolled out last November on a handful of devices should now be available for nearly two dozens Xiaomi smartphone models. This includes the Xiaomi Redmi 2 and Redmi 2 Prime, the Redmi 4A, the Redmi Note Prime and Redmi Note 4 / 4G along with the Note 3, the Mi Max and Mi Max 2, as well as the Mi MIX 2, Mi 3, Mi 4, and Mi 5. Also on the list are the Redmi Y1 and Y1 Lite budget models, the former of which was released in India back in November around the same time as the initial MIUI 9 launch took place.

As a proprietary skin for Android OS based on Oreo, Xiaomi’s MIUI 9 Global Stable ROM promises improved performance through optimized system animations and automated tasks for clearing the cache, as well as a new file system manager and core congestion control, real-time defragmentation capabilities and “dozens” of changes under the hood to improve performance. Smartphones running MIUI 9 should also benefit from higher speeds when launching applications through the addition of three new optimizations including intelligent CPU acceleration, optimized thread scheduling, and optimized haptic feedback. Applications will also be prioritized through Dynamic Resource Allocation which should improve times when switching between them and offer a smoother multitasking experience. On the visual side of things, MIUI 9 introduces a new, cleaner notification shade that allows for quick message replies, as well as support for 21 animated icons. As for pre-loaded apps, MIUI 9 comes with an all-new Mi Video application boasting a simplified user interface, as well as a new Gallery application introducing additional editing options and cloud backup capabilities. The new MI Drop version is also included in the latest OS update, featuring a redesigned user interface and the new ability to transfer files between different Android phones, not just Mi devices.

Stable MIUI ROM users with smartphones eligible for the MIUI 9 update should be able to acquire the new software over-the-air, while MIUI Global Beta ROM users are required to apply the latest Stable release through the fast boot method. All the necessary files and instructions can be found on the official MIUI forum thread by visiting the source linked below. 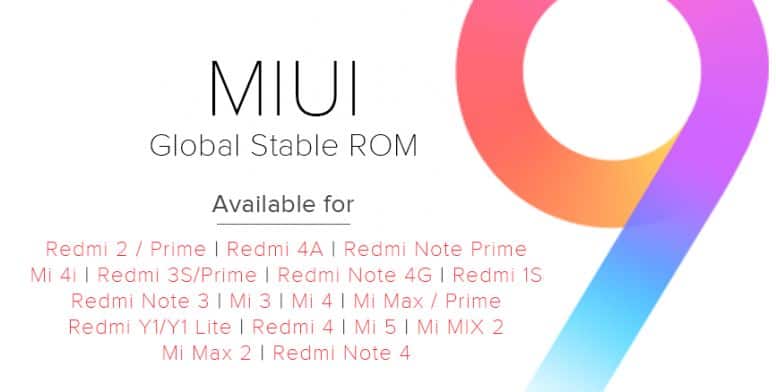