The Xiaomi Mi MIX 2S is essentially a refined version of the Mi MIX 2. It comes with a more powerful processor, a better camera setup and wireless charging.

The Xiaomi Mi MIX 2 was announced back in September last year, as an upgrade to the first-gen Mi MIX handset which managed to surprise many people with its design. That being said, the Mi MIX 2S is now here, and it builds on what the Mi MIX 2 had to offer. As its name says, this is not a whole revamp of the phone, but simply a refinement of what the Mi MIX 2 had to offer. Having that in mind, the Mi MIX 2S does come with a more powerful processor, Qualcomm’s flagship SoC, a new display, and a slightly tweaked design. The company also put some effort in the camera department, so the Mi MIX 2S does not sport a single camera as its predecessors, but comes with a dual camera setup on the back.

This handset is, however, quite similar to the Mi MIX 2 in many ways, including its design, which we’ll talk more about later. The release of this phone does not come as a surprise, as it was both rumored and leaked for quite some time now, but it’s still odd timing for Xiaomi, as the Mi 7 was expected to arrive in March or April this year. The release of the Mi MIX 2S will probably push the Mi 7’s announcement back, and even though we still don’t have any info regarding that, chances are that the phone will launch in Q3, probably in the summer, and it will sport the same SoC as the Mi MIX 2S, but it will ship with a smaller display, and smaller footprint. It is also worth saying that the Mi MIX 2S adopts Google's ARCore technology for augmented reality, which managed to surprise some people. Having that in mind, let’s talk more about the Mi MIX 2S.

The Xiaomi Mi MIX 2S is fueled by one of the most powerful mobile processors out there, if not the most powerful one, the Snapdragon 845 64-bit octa-core SoC. That processor comes with the Adreno 540 GPU, and it fuels the Galaxy S9, S9 Plus, Sony Xperia XZ2, and so on. The Xiaomi Mi MIX 2S features a 5.99-inch fullHD+ (2160 x 1080) display, which is the same size as the one on the Mi MIX 2, and this is not an OLED display as some rumors claimed it will be. This display can provide a maximum brightness of 585 nits, and on the company included a 2.5D curved glass on top of it. The Xiaomi Mi MIX 2S comes in two RAM variants, the more affordable version of the device features 6GB of LPDDR4X RAM, while the more expensive one comes with 8GB of LPDDR4X RAM. That’s not all, though, there’s some difference in the storage section as well, as the 6GB RAM model comes in 64GB and 128GB versions, while the 8GB RAM mode features 256GB of native storage. Neither of these variants offer storage expansion, though, so keep that in mind.

The Xiaomi Mi MIX 2S arrives in two RAM variants, and this time around, both variants of the phone offer the same design, they both sport ceramic unibody design, while the phone's frame is made out of aluminum. A 6GB RAM variant of the Xiaomi Mi MIX 2 was made out of metal and glass, while its 8GB RAM model featured a ceramic unibody build, but in the case of the Mi MIX 2S, all models sport the same build, as already mentioned. Ceramic should be more resistant to scratches than glass, but it's also heavier than glass, which is why the Mi MIX 2S weighs 191 grams. Now, in terms of the design in general, the Mi MIX 2S sports really thin bezels, and it has a thin ‘chin’ below its display, as did the Mi MIX 2.

Another thing you’ll notice the moment you lay your eyes on the Mi MIX 2S, is that it does not sport a display notch, which is something that many Chinese phones adopted for one reason or the other. Xiaomi decided not to go down that path, which is something many consumers will probably appreciate. The Xiaomi Mi MIX 2S is very slippy in general, similar to the Mi MIX 2. All the physical buttons are included on the right-hand side of the Mi MIX 2S, while you will find a SIM card tray on the left. A Type-C USB port is located on the bottom of the Mi MIX 2S, while you will also find the phone’s loudspeaker down there. The Xiaomi Mi MIX 2S’ display sports rounded corners, and its top, and side bezels are equally thin. The phone was announced in Black and White color variants. 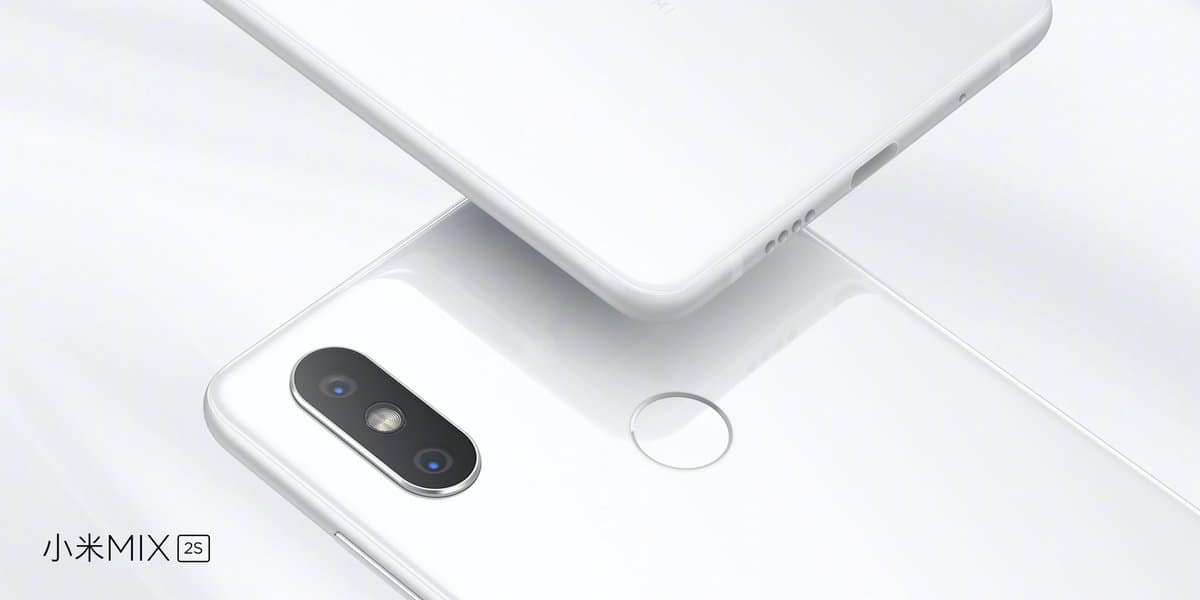 Xiaomi has opted to include two cameras on the back of the Mi MIX 2S, compared to one camera on the Mi MIX 2. Before we go into details, it is worth noting that a 4-axis OIS is included in the package as well, and the same goes for a hardware-level, multi-frame noise reduction. You will find two 12-megapixel cameras on the back of the phone, a main RGB sensor, and a telephoto lens for 2x loss-less zoom, which is a similar setup as the one we’ve seen in the Mi 7. The phone’s main 12-megapixel camera features Sony's IMX363 sensor, 1.4um pixel size and an f/1.8 aperture, and the device is capable of shooting 4K video. The phone’s telephoto lens comes with a f/2.4 aperture, and a regular 1.0um pixel size, while we're looking at Samsung's S5K3M3 sensor here. That lens is here mainly to enable 2x lossless zoom, but also to make it possible for the device to shoot images with a proper bokeh effect. Keep in mind that the phone's main sensor is the way to go when it comes to low light, due to its aperture, the phone's secondary sensor won't be as good in such conditions. Now, as far as the device’s front-facing camera is concerned, you will find an 5-megapixel shooter there, and it’s located below the phone’s display, in the lower-right corner of the phone’s front side. That camera comes with a f/2.0 aperture, 1.12um pixel size, and an LED flash is not available on the front side of the phone, only on the back, where you will find a dual-LED, dual-tone flash. During the press conference, Xiaomi mentioned that the Mi MIX 2S' dual camera system can detect 206 scenes across 25 categories, while a dynamic bokeh effect is a part of the package as well. On top of everything, the Mi MIX 2S' camera (photo only) received a 101 rating from DxOMark, says Xiaomi.

The Xiaomi Mi MIX 2S features a 3,400mAh non-removable battery, which is the same-size battery as the one in the Mi MIX 2. Having that in mind, the Mi MIX 2S comes with the Snapdragon 845, which is more power efficient than the Snapdragon 835. That SoC, In addition to software improvements over the MI MIX 2, should mean that the Mi MIX 2S will offer a better battery life than the Mi MIX 2. It is worth noting, though, that the Mi MIX 2 was really good in terms of battery life, so… there you have it. If you, however, end up needing to recharge in the middle of the day, well, you will be able to take advantage of Qualcomm’s Quick Charge 3.0 fast charging tech (Quick Charge 3.0 adapter is included in the package), as it is available in the Mi MIX 2S.

The Xiaomi Mi MIX 2S comes with the latest version of Xiaomi’s MIUI skin, MIUI 9, though we're not exactly sure which versino of MIUI 9 just yet. Xiaomi did start rolling out MIUI 9.5 quite recently for its devices, with some improvements to the notification shade and 'Quick Reply' function, but we're not sure if that specific version of MIUI is included here. Now, MIUI 9, in general, is considerably different than MIUI 8, but those were mostly under-the-hood changes that Xiaomi introduced. As far as the design goes, MIUI 9 does look quite similar to MIUI 8, which is not necessarily a bad thing, though you need to remember than MIUI does not come with an app drawer, you’ll find all of your installed apps on the phone’s home screen(s), as is the case with iOS. You can change that by using a third-party launcher, of course, but it’s something worth noting if you’ll use MIUI launcher. MIUI 9 also comes with support for themes, so you’ll be able to change the look of MIUI to a degree as well. Now, on top of everything, you can also choose whether you’d like to use regular on-screen navigation buttons, or navigation gestures, similar to the ones Apple introduced for the iPhone X. 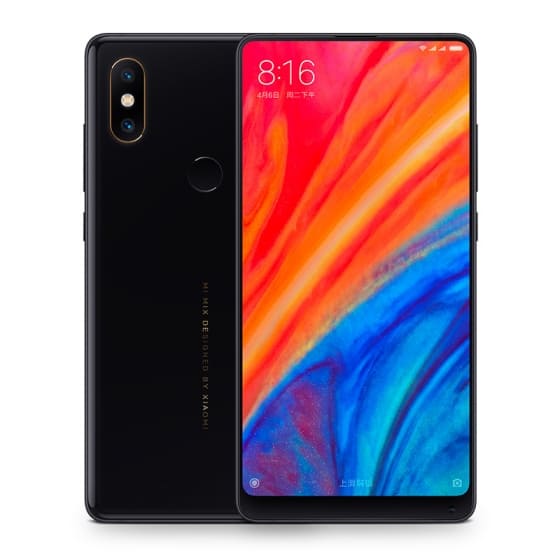 The Xiaomi MI MIX 2S does feature a fingerprint scanner, which is placed on the back of the device, but that’s not the only security authentication method that you’ll find on the Mi MIX 2S. Xiaomi has also included face scanning here, which works in a similar fashion to what OnePlus included in the OnePlus 5T. Xiaomi’s facial scanning software scans your face using the MI MIX 2S’ front-facing camera, though the company notes that this method of authentication is not as secure as the phone’s fingerprint scanner, so that’s worth keeping in mind. If you’re looking for the most secure method, you’ll need to use the fingerprint scanner, or regular methods such as a PIN code or pattern unlock.

The Xiaomi Mi MIX 2S’ MIUI skin also comes with a special app which is dedicated to security, and it’s actually called ‘Security’. That app actually has several uses, it functions as an antivirus, while you can use it to clean up unwanted files as well, including cache, files you haven’t used in a while, files that take up too much storage on the phone, and so on. From this app, you can also tweak notification access for specific apps, while you will find other security-related options included here as well. That app came with the Mi MIX 2 as well, and other Xiaomi-branded phones in the past, so if you’ve owned one of the company’s devices in the last couple of years, you’ll know exactly what you’re getting yourself into.

The Xiaomi Mi MIX 2S can be pre-ordered in China starting today, while the phone will probably reach other markets in the future, but Xiaomi did not really talk about its availability outside of its homeland. Having said that, the device will go on sale on April X, while the company did share pricing info for the Mi MIX 2S as well. The 6GB RAM variant of the phone with 64GB of storage is priced at 3,299 Yuan ($527), while the 128GB storage model costs 3,599 Yuan ($575). If you’re looking to get the top-of-the-line model with 8GB of RAM and 256GB of native storage, you will have to pay 3,999 Yuan ($639). It is worth mentioning that + the most powerful variant of the Mi MIX 2S comes with a wireless charging pad. All three of these versions are already available for pre-order in China, though only their black-colored variants. The white-colored Mi MIX 2S will arrive at a later date. The Xiaomi Mi MIX 2S will become for purchase on April 3 in China, while Xiaomi did not share any info regarding the phone's availability outside of China.

Advertisement
Trusted By Millions
Independent, Expert Android News You Can Trust, Since 2010
Publishing More Android Than Anyone Else
32
Today
59
This Week
364
This Month
1043
This Year
111165
All Time
Advertisement