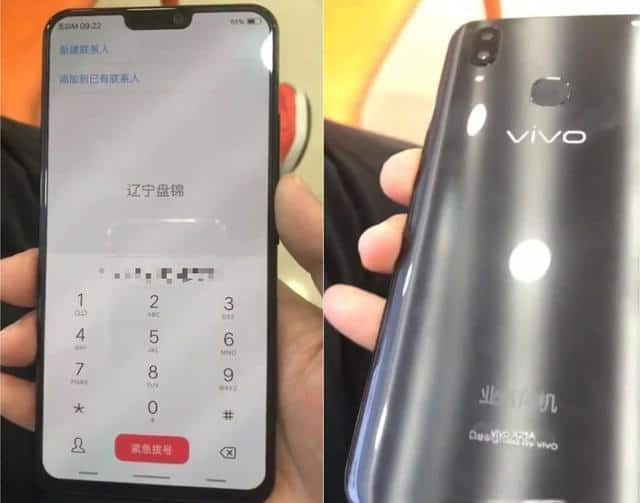 Not long after a recent report linked the upcoming Vivo X21 with a possible March 19 launch date, a couple of hands-on images with the alleged device emerged, revealing various design cues and reconfirming that the smartphone has a display notch at the top. Likewise, the unit depicted in these photos appears to have a full-screen bezel-less design and a glossy back panel which might be covered in curved glass, but despite the recent reports claiming that the device will have an in-panel fingerprint sensor like the Vivo X20 Plus UD, this latest leak suggests otherwise. This could mean that the phone captured in these photos isn’t the Vivo X21 or that the device might not employ in-display fingerprint sensor technology after all, but there’s also a remote possibility that Vivo could release the upcoming model in two main variants with different fingerprint sensor configurations.

From the front, the smartphone seen in these latest images appears very similar to the one depicted in previously-leaked promotional material pertaining to the Vivo X21. It has a thin metal frame and bezels all around, as well as a power key and volume rocker on the right edge. The display notch at the top should carry a loudspeaker next to a front-facing camera, while the back panel accommodates a vertically-aligned dual camera along with the aforementioned fingerprint scanner placed in the center. This comes somewhat as a surprise given the fact that Vivo has previously and successfully experimented with in-panel fingerprint technology along with the Vivo X20 Plus UD as well as the Vivo APEX ‘halo’ device which was showcased at Mobile World Congress in February as the company’s design cornerstone for upcoming devices. Having said that, it’s unclear whether the Vivo X21 will make use of this particular technology or remain more conservative in its approach to the placement of its fingerprint scanner.

As for other internal hardware details, the Vivo X21 is said to be powered by the Qualcomm Snapdragon 660 chipset, though other rumors suggest that the unit could make use of the chipset manufacturer’s Snapdragon 670 SoC instead, which should feature four Kryo 360 Gold CPU cores clocked at up to 2.6GHz along with four additional Kryo 385 Silver cores operating at 1.7GHz, as well as an Adreno 615 graphics chip. More details should be officially announced on March 19.