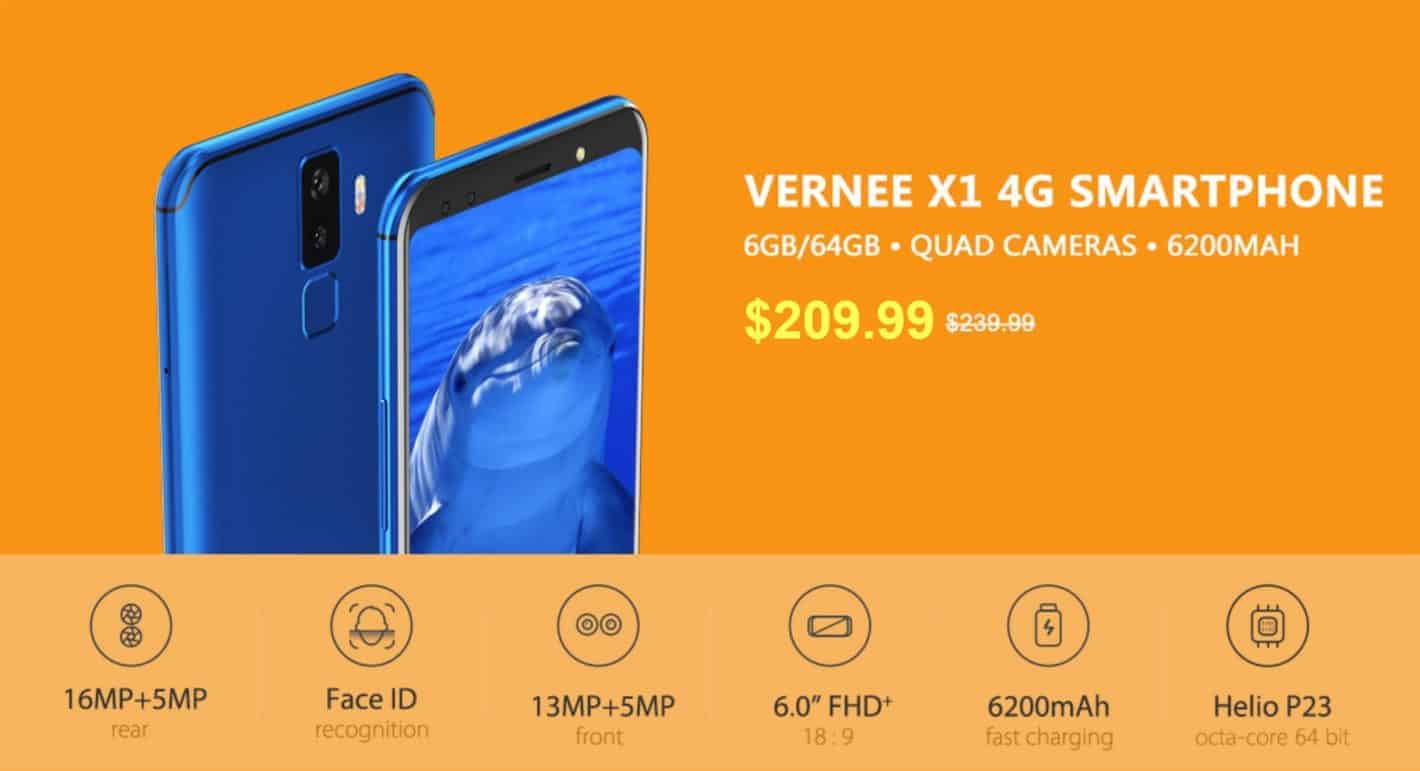 Following the release of the Vernee X the company has now started taking pre-orders for the Vernee X1 smartphone. Generally speaking, this is the same phone as the Vernee X although it looks to combine the best of the two versions of the previous model, resulting in one affordable model which may appeal to more people. For example, the original Vernee X was available in two different versions with one equipped with 4GB RAM and 64GB storage, and the other featuring 6GB RAM and 128GB storage. The Vernee X1, however, arrives neatly positioned between the two with 6GB RAM and 64GB storage. As a result, those who do not need the extended levels of storage on offer with the 128GB model now no longer have to compromise on the RAM count.

RAM and storage aside and the rest of the specs are directly in line with the two Vernee X models. So, for example, the Vernee X1 also features a dual camera setup on the front of the device, as well as one on the back. The front combo consists of 13-megapixel and 5-megapixel cameras (as well as an LED flash), while the rear combo is made up of 16-megapixel and 5-megapixel cameras – as well as fast autofocus and an F/2.0 aperture to further help with an improved bokeh effect. In addition, the Vernee X1 comes loaded with a 6-inch display that also boasts an 18:9 aspect ratio, resulting in a slimmer feel and one more akin to a 5.5-inch smartphone. As well as a MediaTek Helio P23 octa-core processor, Face ID unlock, a rear fingerprint sensor, Android 8.1 (Oreo), a fairly substantial 6,200 mAh capacity battery, and support for the company’s VOS super power saving mode. When a charge is needed the Vernee X1 is expected to receive a full battery charge in two and a half hours.

As for the price, the Vernee X1 is expected to become generally available priced at $239.99. Although those who do place a pre-order will be able to save $30 off that price with the current pre-order cost set at $209.99. To lock in this price pre-orders will need to have been made by April 2, 2018. More details, and the option to place a pre-order at the lower cost, available through the link below. For a closer look at the Vernee X1 check out the official unboxing video, also below.

Advertisement
More info/Pre-order Vernee X1 (GearBest)
Advertisement
Trusted By Millions
Independent, Expert Android News You Can Trust, Since 2010
Publishing More Android Than Anyone Else
37
Today
91
This Week
92
This Month
4857
This Year
106334
All Time
Advertisement