Former Amazon Alexa Head Researcher Ashwin Ram has now left the company and is headed to Google’s Cloud division to take on the position of Technical Director of A.I., the industry veteran revealed on LinkedIn. Ram didn’t provide an official reason for his decision to leave Amazon but the decision appears to have been made on good terms. Ram says that time spent with his “legendary” former employer were a delight and that he enjoyed working with some of the smartest people he knows.

This particular addition to Google’s team is likely to be a big boost to the company’s A.I. business. Although Ram commends Google’s A.I. in his statement – saying that it is “arguably the best on the planet,” Amazon’s Alexa remains the most popular consumer-facing intelligent assistant in the United States. It could be fairly said that Google’s A.I. feels smarter but Amazon has a larger share of the market and does a lot more with home connectivity. Meanwhile, the news doesn’t necessarily mean Ram will be working with the Google Assistant or any other Assistant-associated projects at the company. With consideration for his new job title, it seems more likely that he’ll be much more involved with the Google Cloud platform itself. That would almost certainly include aspects of that platform’s Cloud Machine Learning Engine and Cloud AutoML offerings. The former is linked in with Google’s TensorFlow, while the latter focuses on helping those without a lot of A.I. creation experience to implement machine learning into their own projects.

That’s not necessarily bad news since the field of artificial intelligence is still relatively new and could always use various improvements. It also doesn’t rule out Ram becoming involved in more user-facing sides to Google’s multifaceted A.I. efforts. The company is well-known for its consistent staff shuffling and repositioning of employees to take on roles outside of their ordinary duties. So it’s still possible that the former Amazon Alexa Head Researcher will be able to provide input and suggest improvements to make the Google Assistant even better or to create something entirely new for the company going forward. 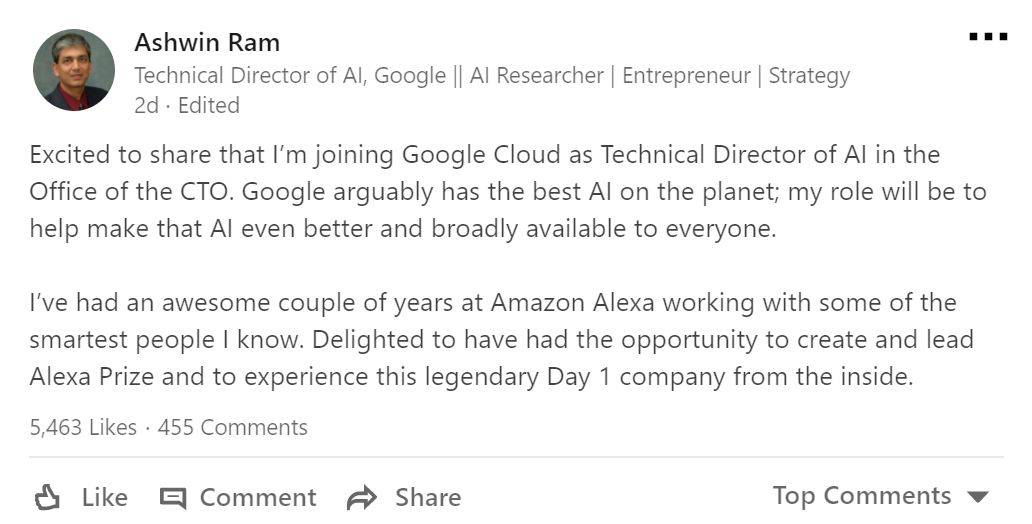