Spotify has begun sending out warning emails to those who use any pirated version of the popular app, recent reports indicate. The music streaming company is currently the number one such service worldwide, boasting nearly double the amount of paid subscribers as Apple Music at 71 million. The firm also has over 88 million users that use its free, ad-supported platform, but some of these are understood to be pirates taking advantage of cracked versions of the app.

Among the free tier’s restrictions are certain limitations on the number of song skips, as well as the fact that users can’t skip backward at all, only forward. In addition, a number of ads are placed between songs after a certain amount of time, while users are also forced to listen to their tracks on shuffle. Certain new music releases can also be restricted to paid subscribers for up to two weeks. Now, shortly ahead of the company’s planned IPO, it appears Spotify has decided to crack down on these users by sending out warning emails. In these, Spotify claims that “abnormal activity” has been observed on the respective apps being used, and goes on to state that access to their account has been withdrawn. In order to regain access, these users simply have to download the official Spotify app and enter their account details. Users who continue to violate Spotify’s terms of service could be hit with a temporary suspension or possibly even termination of their Spotify account. The move to crack down on pirates comes shortly after the company wrote to Github requesting that the “Dogfood” Spotify mod which effectively hacks its premium service be removed altogether.

The company’s recent crackdown certainly appears to be related to its IPO plans and is meant to provide additional assurances to investors while also pushing users toward the premium service. While no stricter sanctions have yet been announced, the startup may opt for such moves moving forward. 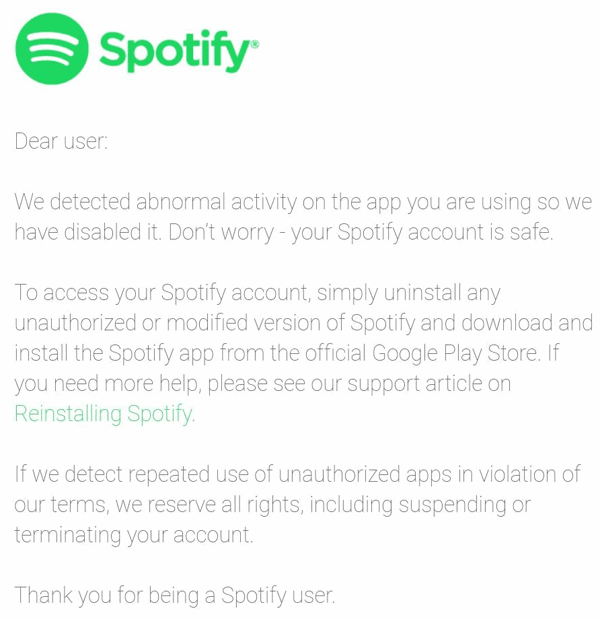