Samsung no longer considers LG to be one of its competitors within the mobile sector, according to comments provided by a company spokesperson during MWC 2018. The spokesperson was initially explaining to AndroidHeadlines how Samsung’s latest smartphones – the Galaxy S9 and S9 Plus – have “less [sic] pre-installed apps than our competitor.” After mentioning LG, the same representative clarified the position stating “we don’t see them as our competitor, I meant Apple.”

Samsung and Apple have endured an interesting relationship, with the two companies often taking shots at each other. In some cases, these have manifested in the courts with one suing the other for, among other things, patent infringements. While in other instances, promotional videos have been made public designed to downplay the products, features, and services offered by the other. However, this is often seen as a byproduct of the two operating systems, Android and iOS, as it is not solely a Samsung and Apple situation. In contrast, within Android, it has always been assumed Samsung was battling to maintain its position as the dominant Android smartphone manufacturer, with part of that position maintenance typically involving fending off attacks from rival Android phone makers, including LG. However, as time has gone on, LG’s ability to compete with Samsung has waned, with its mobile division struggling to keep up. According to recent figures from IDC highlighted by the end of 2017, Samsung occupied a 21.6-percent global smartphone market share, with Apple in second place with 14.7-percent. Figures that have largely remained unchanged over the previous year, with the two companies noting a market share of 21.1-percent and 14.6-percent, respectively. This is in contrast to LG who no longer registers as an independent entity on the IDC’s list as the South Korean manufacturer’s figures are now buried within “Others.” 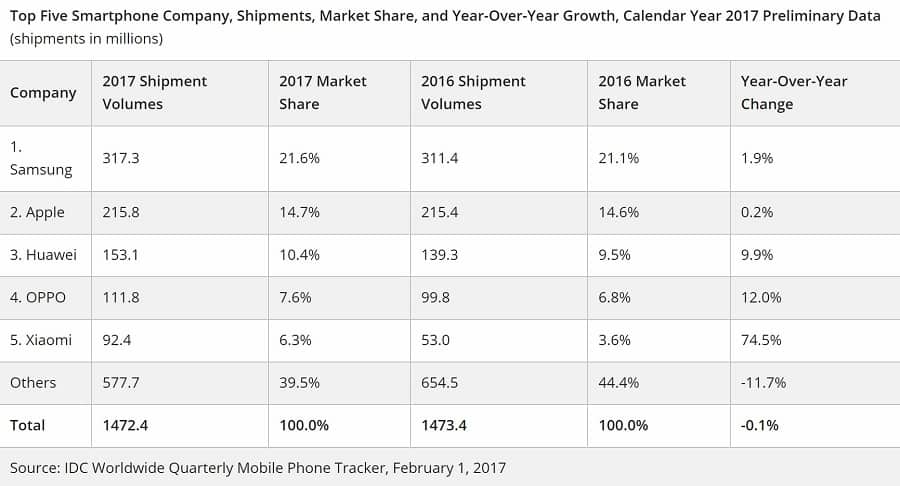 With Samsung and Apple’s combined market share for 2017 (36.3-percent) only barely changing compared to 2016 (35.7-percent), LG’s drop in the market has not come at the hands of Samsung or Apple. Instead, it would seem LG’s largest issue has come from the rise of Chinese manufacturers (such as Huawei, OPPO and Xiaomi). An aspect LG itself picked up on when it announced its financial results for 2017. As part of that announcement, and in spite of what the company stated were “strong sales of the LG V30 and other premium smartphones and an improved business structure,” LG also noted 2017 had seen the company face “a challenging marketplace and strong competition from Chinese brands.” IDC figures from earlier years further add evidence to this as when looking at the market share for the entire 2013, LG was accredited with accounting for 4.8-percent of the smartphone shipment market.

While this figure significantly pales in comparison to the 31.3-percent Samsung occupied during the same year, the difference is how LG was at the time recognized by the IDC as a direct competitor – with its 4.8-percent figure placing the company firmly in the fourth position, behind Samsung, Apple, and Huawei. A that’s now occupied by OPPO as of 2017, according to the same industry tracker. For further comparison, during the same year, and in spite of Huawei still ranking higher than LG at the time, Huawei’s market share stood at 4.9-percent, representing a 0.1-percent market share increase over LG. Even more revealing was the change that was taking effect up until that point. As the 2012 market share figures showed Huawei registering 4-percent and LG at 3.6-percent. Therefore, over the twelve months between 2012 and 2013, LG had effectively closed the gap on Huawei from 0.4-percent down to only 0.1-percent. Resulting in a greater year-over-year change for LG and in spite of Huawei seeing a year-over-year increase in market share of nearly 1-percent. Compare this to the most recent year-end figures, while LG has been relegated to the “Others” camp, Huawei has managed to maintain its third-place position with a 10.4-percent market share. Fast-forward just a year and by the end of 2014, the picture looked very different for LG who was no longer recognized as a top 5 vendor with Lenovo and Xiaomi filling out the list. Since then, LG has struggled to regain the market traction it saw up until 2014 even though the market has become more accessible, with Samsung and Apple both seeing their own market share decreasing.