No Frills Reliable Wireless Fast Charging On A Budget

RAVPower is a brand responsible for countless charging solutions that really needs no introduction and its latest Wireless Charging Stand (model number RP-PC068) doesn’t necessarily do much to break any molds. That’s not necessarily a bad thing either since this Qi-enabled charger is just as reliable as any other products the company has released without breaking the budget. At a current selling price of just $21.99 on Amazon, it may, in fact, be among the most affordable options available to suit the growing number of wireless-charging smartphones. What’s more, it will get the job done regardless of whether a given device supports fast charging or not thanks to its smart charging technology. So although this charger was designed to provide a faster charging experience on Samsung and iOS devices, it should work just fine on other devices that support Qi standard wireless charging. This is the charger that proves comprehensive, dependable wireless charging doesn’t need to cost upwards of $50. 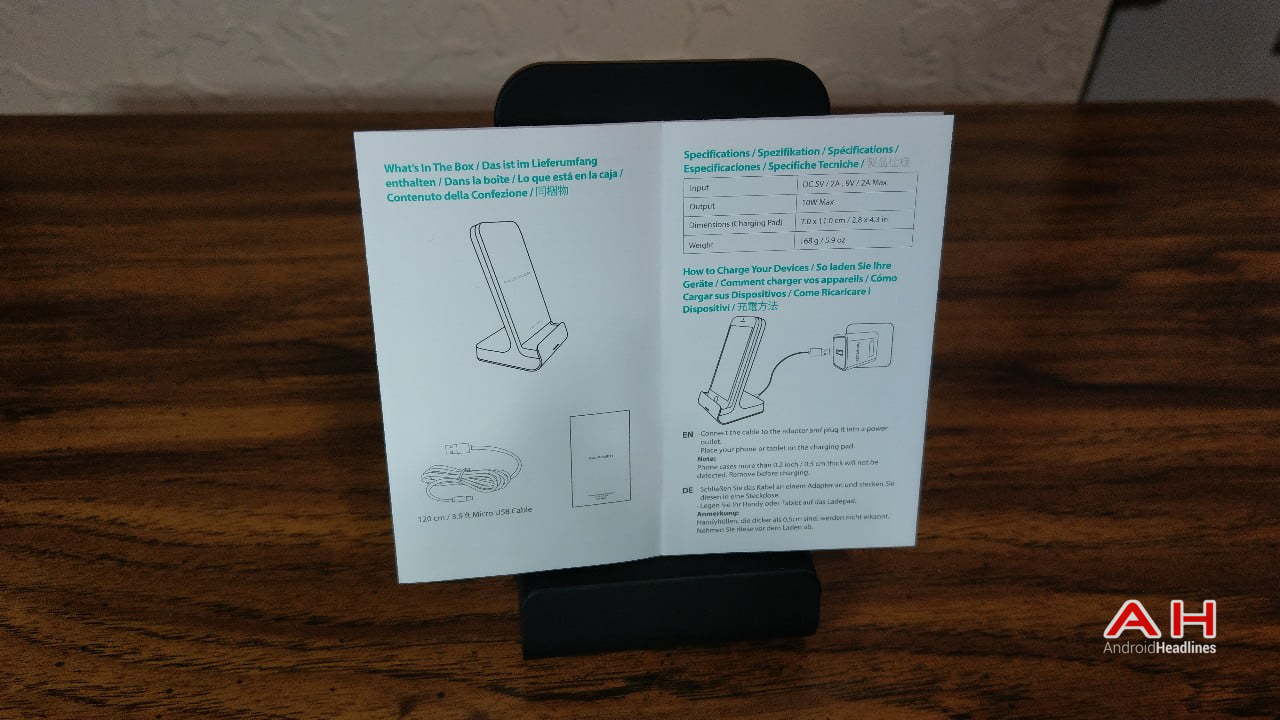 In terms of specifications, there’s nothing really out of the ordinary with the RAVPower Wireless Fast Charging Stand. The charger’s overall footprint is slightly above that of more expensive models, measuring in at 70mm x 70mm x 110mm with a weight of just 168g. Meanwhile, it takes an input of 5V/2A or a maximum input of 9V/2A and users will have to find their own wall adapter because it doesn’t come with one. Power is provided via micro USB and output to the user’s device via a dual coil configuration that allows for more versatile device placement. Output varies depending on the device used, with a maximum output of up to 10W supported for devices that take advantage of Wireless Fast Charging – meaning that a Samsung Galaxy S8 should only take around three and a half hours to charge completely. Meanwhile, charging is possible through cases of up to 3mm thickness and seems to work well, though metal cases can’t be used for obvious reasons. Cooling vents at the back prevent overheating during charge and an LED bar at the front clues users into the status of their charge at a glance. 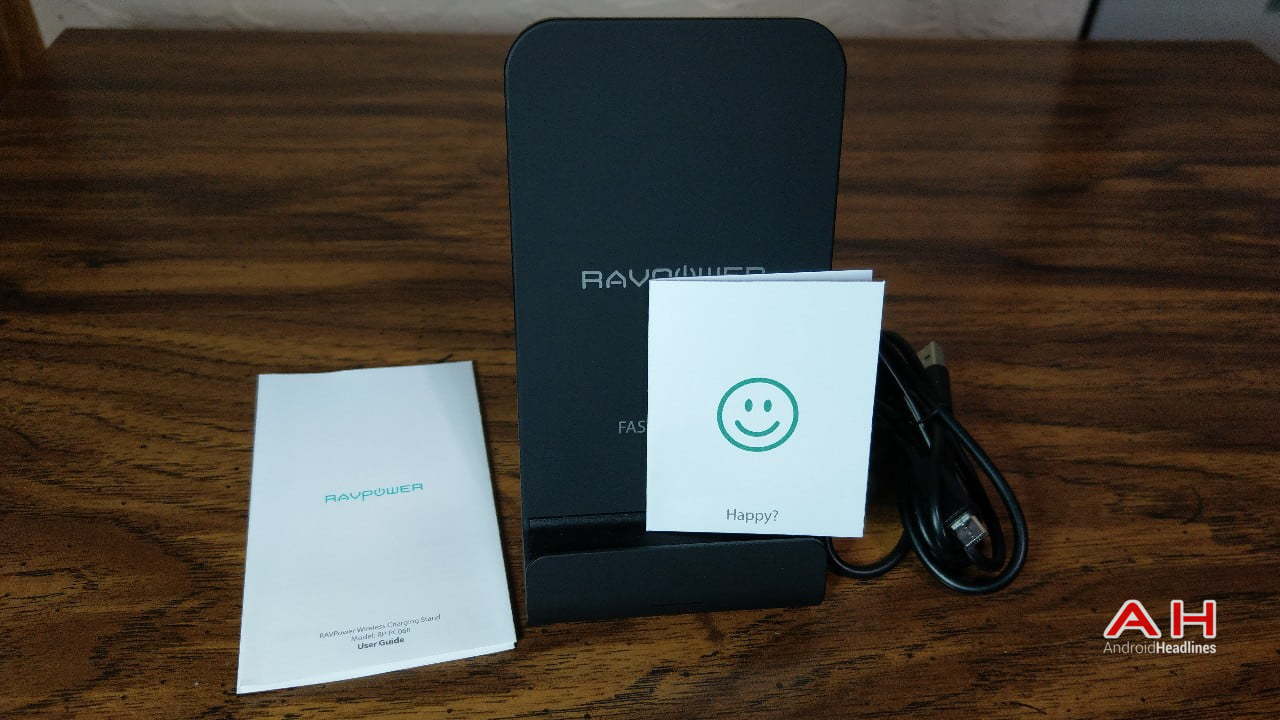 Concerning what ships with this RAVPower wireless charger, there’s not much to speak of. Opening the box reveals the wireless charging stand itself, a 4-ft standard USB A to micro USB cable, user manual, and a dual-purpose warranty extension and customer care card. As mentioned above, there is no wall adapter included with the package but that shouldn’t be too much of an issue for most users since it supports input at anywhere between 5V/2A and 9V/2A. Most adapters shipped with smartphones fall well within that range and, while that could raise the cost by a few dollars for customers who need to buy a new one,  adapters are easy enough to come by and fairly cheap. The warranty and customer care card offers a free warranty extension of 12 months on top of the standard RAVPower 18 month offer. The build quality of RAVPower’s Wireless Fast Charging Stand is exceptional, with consideration for the price point. Smooth, soft-touch plastics coat nearly the entire unit to reduce the risk that placing a phone on the charger will result in damage to either the charger or the handset. The base features rubber feet for stability, as does the base where said smartphone will be placed. That provides cushioning for the smartphone but also prevents it from sliding around and the whole setup feels very solid. The entire package is a matte black coloration that should prevent fingerprints or oils building up, although we did notice that the material does appear prone to pick up dust and other particulates. Meanwhile, the provided cable, while nothing spectacular, fits snugly into its micro USB plug with no wiggle at all.

Overheating doesn’t appear to be an issue at all but it’s worth noting that the device we used in our test, an LG G6, doesn’t actually support the higher speed fast-charging. So it may or may not heat up when charging at a higher rate. Having said that, the ventilation holes at the back appear to work very well to keep this charger cool. Those are strategically placed in two rows where the charging coils themselves are and toward the bottom where the cable connects. Moving on to the internal hardware of RAVPower’s RP-PC068, as already noted, there are two charging coils in this device. That means that charging is solid whether a smartphone is placed in the vertical or horizontal orientation. While that may not seem like a big deal, it actually allows more versatility in use. It provides a stable base to simply keep using the device while it is charging, whether as a calculator, alarm clock, to scroll through contacts, or to watch a movie. It would be difficult to find much to complain about with this wireless charging stand at just under $22. However, there are always a few things that could be improved. Setting aside that RAVPower chose not to include a wall adapter with this charger, the included cable could have been a bit longer. Although a 4-foot cable appears to be the industry standard and works in most scenarios, wall sockets aren’t always in the most usable places. A longer cable would be useful in those instances where a wall plug simply isn’t close enough to the desired placement surface. Meanwhile, as already pointed out, the fact that this charger seems to draw in dust and other particles out of the air is going to prove moderately annoying for those users who care as much about aesthetics as functionality. Moreover, the lip at the front of the base is fairly sharp and isn’t coated with soft-touch materials. So clumsy placement could feasibly result in scratching on a smartphone’s display and although we didn’t see any problems with our test device, it could happen if users aren’t careful. It goes without saying that there isn’t any ruggedization with this charger since the technology doesn’t allow for it at this point. So getting it wet or putting it in a dusty environment is really not a good idea and will probably ruin the charger.

On the other hand, there is a lot to love with this charger. The ability to charge any Qi standard compatible device wirelessly at such a low cost is a definite perk. The LEDs on the front of the charger are easy to read and universally understandable. A red light bar means that no device is detected while flashing in red means that it isn’t compatible or that safety protections have been activated. The charger won’t charge if it detects metal or magnetics on the charging coils. Green, of course, means that a device is charged while flashing green means that it is charging. That ease of use, coupled with the ability to charge with a protective case on the device, in most cases, is a clear bonus to buying this wireless charging stand.

All things considered, the price point here can’t really get much lower for a wireless charger that’s fully compatible with the fast charging standards of some high-end smartphones. Taking the build quality of the RAVPower Wireless Fast Charger into account, it actually represents a clear value over many of the chargers offered by competitors in the space. It bears mention that users should, of course, ensure that their device actually supports Qi wireless charging standards before buying. But there aren’t really any good reasons not to consider this charger for anybody who is in the market for a wireless charging solution.