New Xiaomi-branded handset has just surfaced on Geekbench, the Xiaomi Dipper. This handset follows the Xiaomi Berlin which popped up on Geekbench a couple of days ago, and this phone’s specs are quite interesting. Geekbench reports that the Xiaomi Dipper will be fueled by the Snapdragon 845 64-bit octa-core processor, so we’re probably looking at a flagship handset here, though this is almost certainly not the Mi MIX 2S which is expected to arrive later this month. It is, however, possible that we’re looking at the Xiaomi Mi 7 here.

Geekbench reports that the Xiaomi Dipper will also come with 3GB of RAM and Android 8.0 Oreo. This handset also managed to score 2,449 points in the single-core benchmark, while it hit 8,309 points in the multi-core benchmark. Having said that, the ‘Dipper’ codename could refer to the Big Dipper constellation, and previous ‘Mi X’ smartphones were all assigned codenames which are inspired by constellations. The Xiaomi Mi 5, Mi 5S, Mi 5S Plus and Mi 6 were codenamed Gemini, Capricorn, Natrium and Sagit, respectively, so the ‘Dipper’ codename for the Mi 7 makes all the sense in the world. Geekbench does not reveal the display size of the device, unfortunately, but other than its codename, the 3GB RAM spec detail is also kind of revealing, as the Mi MIX 2S probably won’t arrive in a variant which sports less than 6GB of RAM, at least if the Mi MIX 2 is any indication of Mi MIX 2S specs. The Mi MIX 2S will probably ship in both 6GB and 8GB RAM variants, while the Mi 7 may arrive in a 3GB RAM variant as well, in addition to 4GB and 6GB RAM options, though we’re only guessing based on its predecessors.

The Xiaomi Mi 7 is expected to launch later this year, as it’s highly unlikely that Xiaomi will introduce both the Mi 7 and Mi MIX 2S within a month or two, as they’re both flagship-grade phones. The Xiaomi Mi 7 will have support for wireless charging, that was confirmed earlier this year. The Xiaomi Mi 7 will probably sport a smaller display than the Mi MIX 2S, though it’s also expected to sport considerably thinner bezels than its predecessor, the Mi 6, so we’re expecting the Mi 7 to be quite a compact smartphone, as its predecessor is still one of the most compelling compact phones out there. 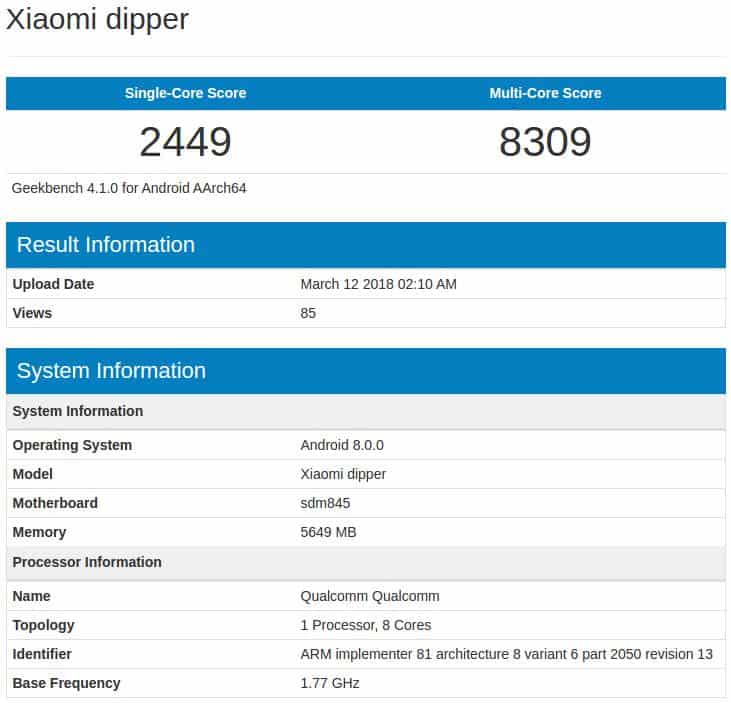