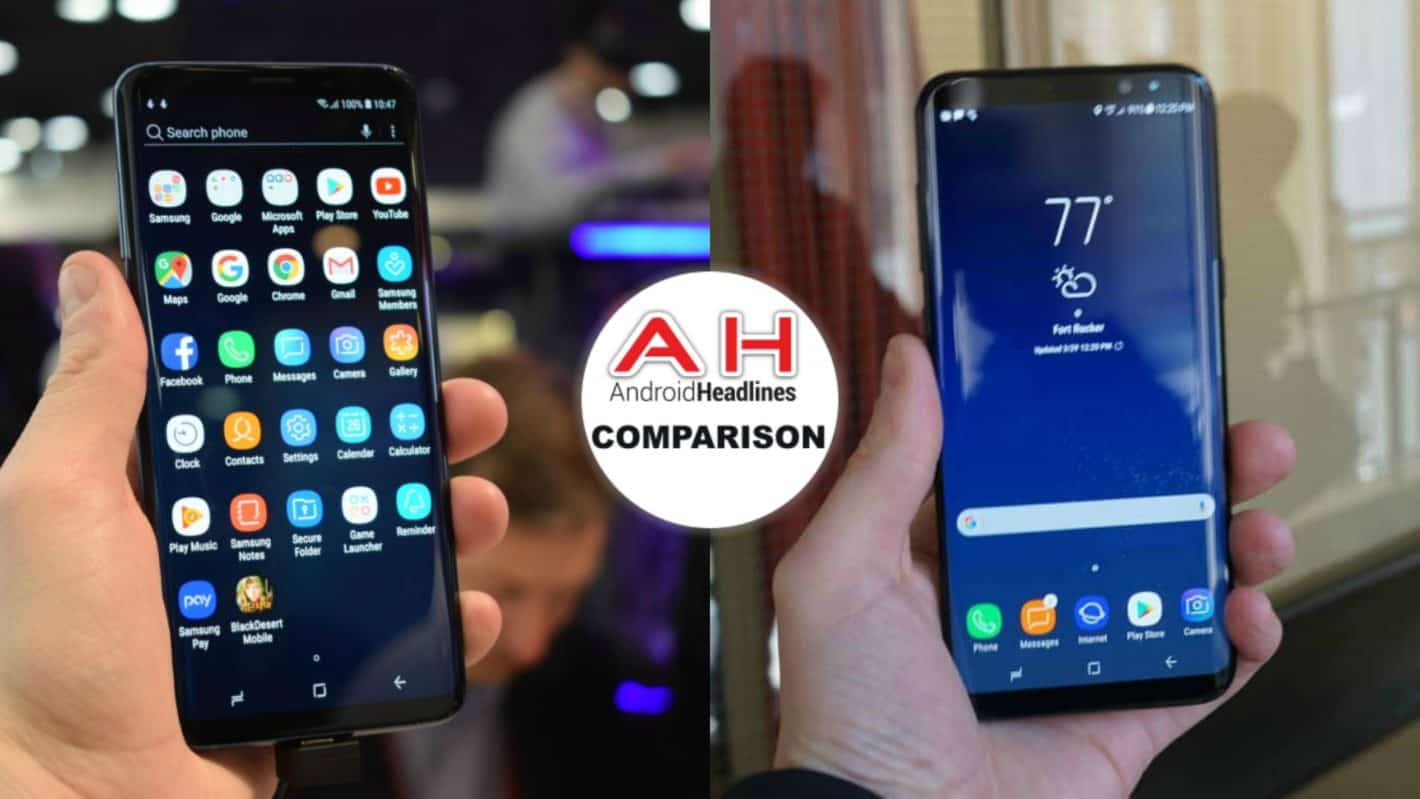 The Galaxy S9 and Galaxy S8 do share a basic DNA – starting with their large 5.8-inch displays and their use of Samsung’s Super AMOLED technology, an 18.5:9 ratio, a WQHD resolution, an Always-On display for notifications, and Gorilla Glass 5. The US/China edition of the Galaxy S9 and Galaxy S8 use a Snapdragon processor and Adreno GPU, only different models with the newer ones being better. Both have 4GB of LPDDR4 RAM and a base of 64GB of expandable internal storage. Both use a 12-megapixel camera that uses Dual Pixels, PDAF, and auto-HDR. They both have the identical front-facing cameras (FFC) with 8 megapixels, AF, f/1.7, and auto-HDR. Both have a 3,000mAh, non-removable battery, and both devices offer rapid charging and Quick Wireless charging. Both offer Bluetooth v5.0, WiFi, a USB 3.1 Type-C port, and a rear-mounted fingerprint sensor. They both have Hi-Res audio and a 3.5mm headphone jack. Both offer IP68 dust and water resistance, facial recognition, an iris scanner, a Heart Rate monitor, an SpO2 sensor, and Samsung’s Bixby assistant. You can get both of these devices on all major US carriers. 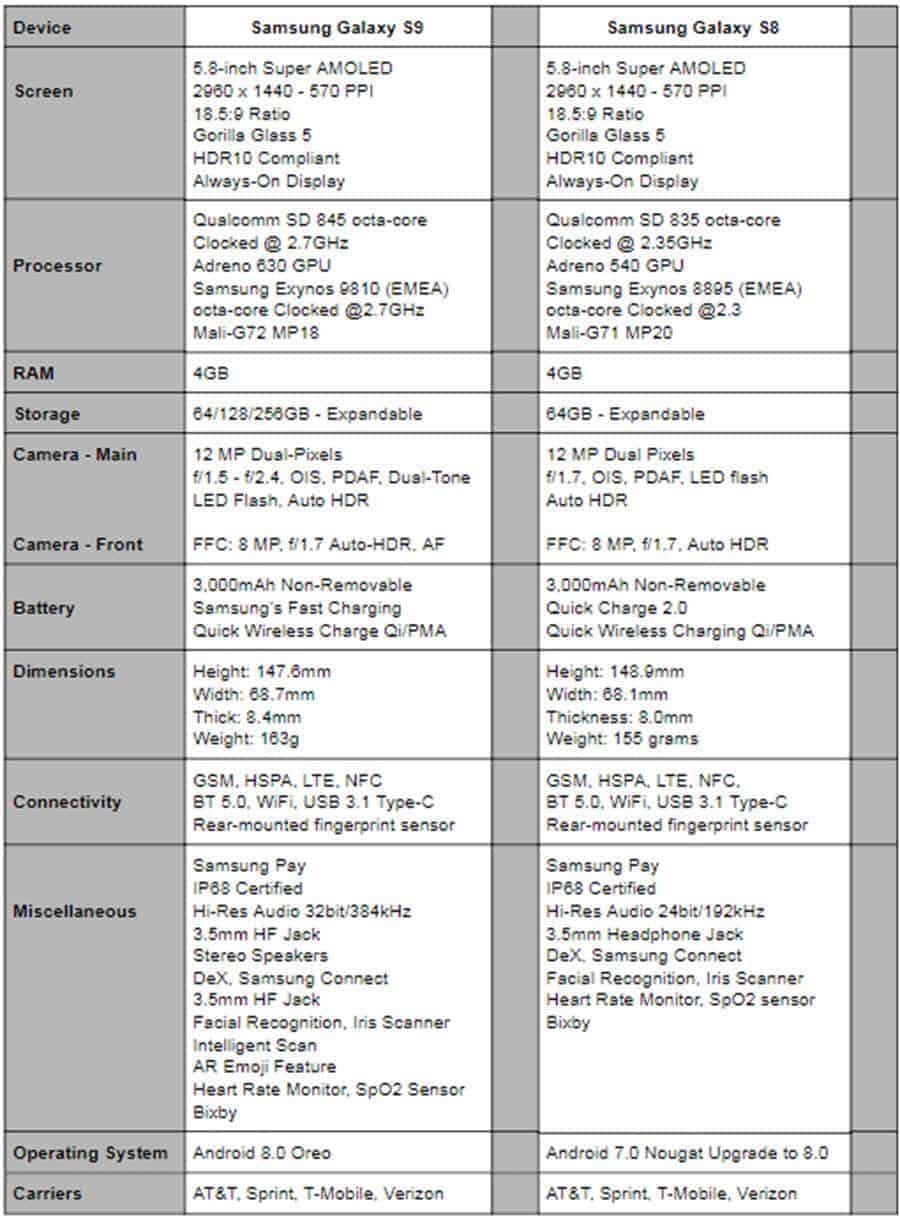 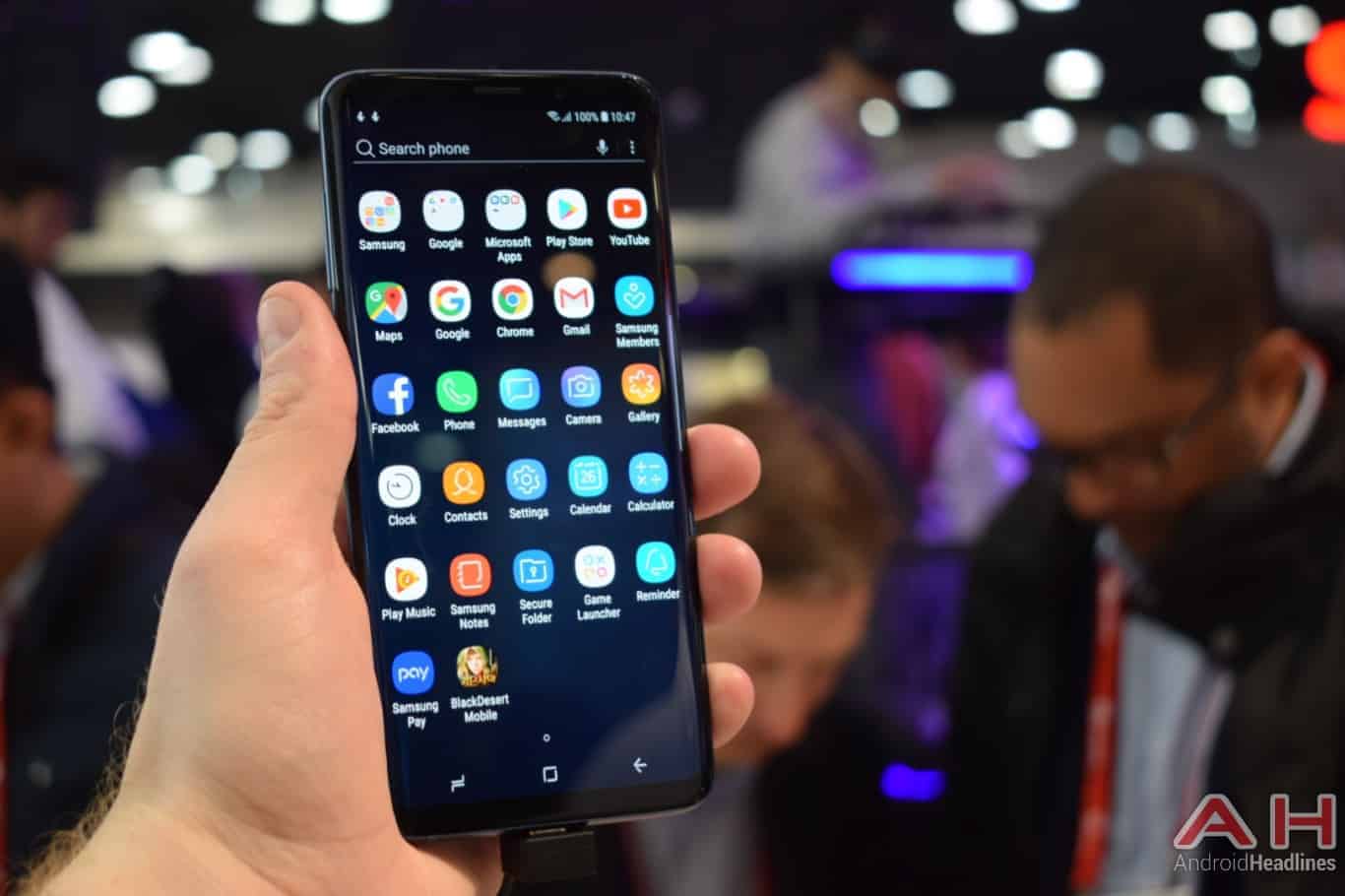 The new Samsung Galaxy S9 will hit the shelves soon, and while it is not very different-looking from the Galaxy S8, Samsung has tweaked it in the right areas to deliver a very desirable device that should outsell every other Android smartphone. Samsung improved the technical and physical aspects of the display, put in the latest and greatest processor and GPU, increased the Hi-Res Audio, added stereo speakers, and kept the 3.5mm headphone jack. Samsung kept the camera at 12 megapixels but improved the Dual-Pixel performance, and added a variable-aperture lens that can open to a large f/1.5 for low-light shots and close to f/2.4 for bright shots – it functions much like the human eye pupil. Samsung repositioned the fingerprint sensor below the camera lens for less smudging and better reachability. It also added AR Emoji for fun and Intelligent Scan (iris + facial recognition working simultaneously) for more accurate authentication that’s also faster.

The new Galaxy S9 packs the same-sized 5.8-inch Infinity Display as its predecessor, the Galaxy S8. However, there are subtle changes, such as an improved Super AMOLED panel, and physically, the curved edges are a little smaller, allowing for very small bezels alongside the long edges. This redesign makes it easier to pick up the device, as well as hold the device without activating any apps. It still has the 2960 x 1440 pixel resolution with 570 pixels-per-inch density, the same 18.5:9 aspect ratio, Gorilla Glass 5, and the Always-On display. Samsung sells two models of its handset – one for the US/China market that uses the newest Qualcomm Snapdragon 845 clocked at 2.70GHz. For outstanding graphics, it packs the new Adreno 630 GPU. The EMEA model sold in most other regions around the world is powered by the Exynos 9810 clocked at 2.70GHz and the Mali-G72 MP18 GPU. The Galaxy S9 still uses 4GB of LPDDR4 RAM (you have to get the Galaxy S9 Plus to get 6GB) and 64GB of expandable memory, although Samsung claims a 128GB and 256GB models will be produced, but getting one depends on your location and willingness to buy a smartphone unlocked without a carrier plan.

Once the Galaxy Note 8 came out with a dual-camera setup, critics thought that the Galaxy S9 and Galaxy S9 Plus would also sport one but Samsung followed Apple’s route and only gave the dual-camera to the Plus model. The Galaxy S9 includes a single 12-megapixel sensor with an adaptive aperture that allows for better low-light photos. It has phase detection autofocus (PDAF), Dual-Tone LED flash, auto HDR, and OIS. It uses the same 8-megapixel sensor for its FFC as the Galaxy S8, with autofocus, a wide-angle lens with the same f/1.7 aperture, and Auto HDR support. The Galaxy S9 uses the same 3,000mAh non-removable battery with support for Samsung’s Adaptive Fast Charging and includes quick wireless charging for both Qi and PMA formats.

The Galaxy S9 comes with Samsung Pay and Samsung’s personal assistant Bixby. With Bixby, you can get answers to simple questions and access to more advanced features such as identifying architectural landmarks when you look through the camera lens. It comes with the usual Samsung features such as a heart rate monitor, an SpO2 sensor, and an IP68 certification for water and dust resistance. The added Intelligent Scan uses both the iris scanner and facial recognition for a more secure and faster way to identify you. The addition of stereo speakers is a long-awaited surprise and the new AR Emoji feature is a fun feature, whereas the blood pressure monitor is an industry first that the Galaxy S8 lacks. Samsung’s DeX module (sold separately) that allows you to turn your phone into a ‘desktop’ experience has also been improved and now allows the device to function as a trackpad. The smartphone is available in Midnight Black, Coral Blue, Titanium Gray, and Lilac Purple, depending on your market and carrier, and comes with Android 8.0 Oreo running out of the box. The device measures 147.6 x 68.7 x 8.4mm and weighs in at 163 grams. It is retailing from $750 to $800, but there are quite a few promotions going on for pre-orders.

The completely redesigned Galaxy S8 was a massive hit for the company in 2017. The beautiful new Infinity Display is literally edge-to-edge as its curved edges almost melt into the metal frame. Even the top and bottom bezels are about as minimal as one could expect. Gone is its iconic Home button with the navigation keys now on the screen only when needed. The fingerprint sensor was moved to the back – although it is right next to the camera lens – something fixed on the Galaxy S9. The bottom bezel serves no visible purpose other than to balance out the top bezel that houses an FFC camera with facial recognition support, an iris scanner, an earpiece, a proximity sensor, and an LED notification light.

The Galaxy S8 sports a 5.8-inch Super AMOLED Infinity Display that comes with an aspect ratio of 18.5:9, and a resolution of 2960 x 1440 that adds up to 570 PPI. It has an Always-On display for notifications that allows the device to put less drain on the battery and to make it easier for the user to look quickly at notifications. Samsung uses Corning Gorilla Glass 5, front and back, for protection. As usual, Samsung sells two models of its handset – the US/China model uses the Qualcomm Snapdragon 835 clocked at 2.35GHz and coupled with the Adreno 540 GPU. The EMEA model sold in most other regions around the world is powered by the Exynos 8895 clocked at 2.30GHz and the Mali-G71 MP20 GPU. The Galaxy S8 has 4GB of LPDDR4 RAM and 64GB of expandable memory.

Samsung puts a lot of thought into its camera department and when the Galaxy S8 hit the stores, its camera was one of the highest-rated ones among smartphones. It includes a 12-megapixel sensor with a large f/1.7 aperture, phase detection autofocus (PDAF), LED flash, auto HDR, and OIS. It uses an 8-megapixel sensor for its FFC with autofocus, a wide-angle lens with the same f/1.7 aperture, and Auto HDR support. The Galaxy S8 packs a 3,000mAh non-removable battery with support for Samsung’s Adaptive Fast Charging and includes quick wireless charging for both Qi and PMA formats.

The Galaxy S8 includes an IP68 certification for water and dust resistance, an iris scanner, facial recognition, Samsung Pay, a heart rate monitor, and a SpO2 sensor. Samsung included its own AI personal assistant called ‘Bixby.’ You can ask Bixby simple questions as well as relying on it for more advanced features such as the ability to get information from a picture, such as identifying architectural landmarks. New to the Galaxy S8 is Samsung’s DeX module (sold separately) that allows you to hook up a monitor, keyboard, and mouse to your phone for a ‘desktop’ experience – not as advanced as the one on the Galaxy S9, though. It is available in Midnight Black, Orchid Gray, Arctic Silver, Coral Blue, Burgundy Red, and Maple Gold, depending on your market carrier or retailer of choice. It came with Android 7.0 (Nougat) running out of the box, but should soon get its 8.0 Oreo upgrade – some already have received their updates. The device measures 148.9 x 68.1 x 8mm, weighs in at 155 grams, and is listed for $760, but you can now find it for much cheaper. 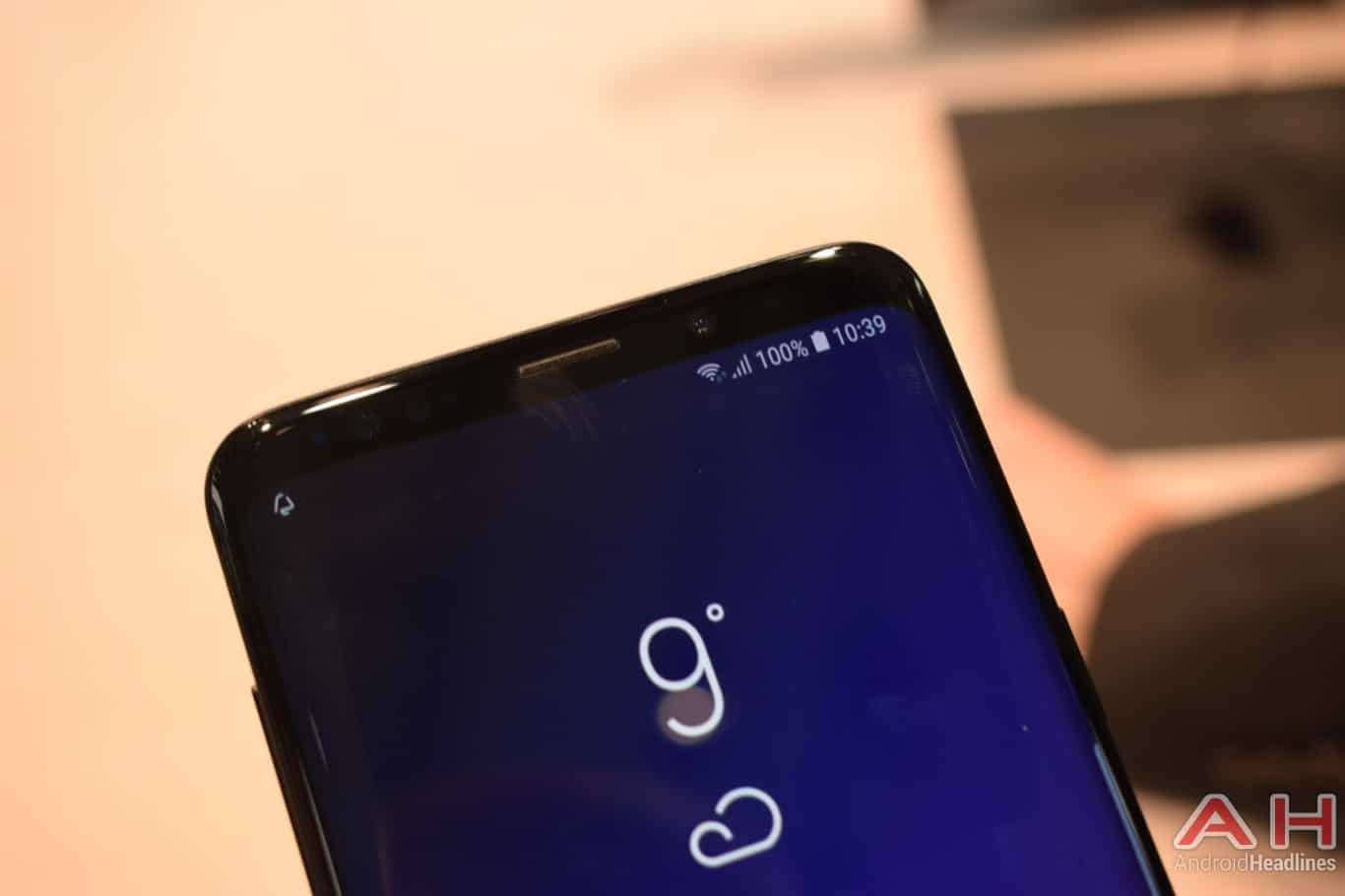 It does not take a genius to pick the Galaxy S9 as the winner of this specification comparison. It has an updated display, a faster and more efficient SD845 and better graphics with the Adreno 630 (or its Exynos counterpart), a better main camera with an adaptive aperture, better positioning of the fingerprint sensor, stereo speakers, Intelligent Scan, AR Emoji, Android 8.0 Oreo with Project Treble support, and much more.

The big question is: should a Galaxy S8 owner upgrade to the Galaxy S9? My opinion is a resounding no. There is no doubt that the Galaxy S9 is the more exciting device of the two, but once you get past the excitement, you realize that the Galaxy S8 is a solid device – it looks almost the same, has an almost equally great display, is fast, and takes gorgeous photos. Sure, who doesn’t want the adaptive aperture, stereo speakers, and the AR Emoji, but that doesn’t mean you should drop you Galaxy 8 for the Galaxy S9. Certainly, if you have a Galaxy S7, it is time to step it up to the Galaxy S9, where you will definitely notice a real difference.