The OnePlus 6’s specs have just surfaced yet again, and this leak is just as sketchy as the last one, which popped up a couple of days ago with the phone’s alleged price tag. If you take a look at the image down below, you will be able to see a printed out spec sheet for the OnePlus A6000 aka OnePlus 6, though basically anyone could have created this table and list down those specs, while the source of the leak also doesn’t seem familiar. This leak does come from China, that much is certain.

If the leaked specs are to be believed, the device will sport a 6.28-inch fullHD+ (2280 x 1080) AMOLED display. That basically means that its display size and tech will be the same as on the OPPO R15, which is actually what most people expect, as the OnePlus 5 was based on the OPPO R11, while the OnePlus 5T was highly inspired by the OPPO R11s. In any case, this info also suggests that the phone will sport a notch at the top of the display, and a 19:9 display aspect ratio. Qualcomm’s Snapdragon 845 64-bit octa-core processor will fuel the OnePlus 6, which is almost certainly true. This leak also suggests that the phone will ship with 6GB of RAM and 128GB of native storage, which makes sense as the previous one suggested that an 8GB RAM variant will include 256GB of native storage. If any of these two leaks are accurate, OnePlus has decided to bump up storage in the OnePlus 6, as the OnePlus 5T’s 6GB RAM variant shipped with 64GB of storage, while the 8GB RAM model came with 128GB of native storage.

The leaked image suggests that the phone will sport 16 and 20-megapixel snappers on the back, both of which will sport f/1.7 aperture, just like was the case with the OnePlus 5T. A 3,450mAh non-removable battery will be a part of this package as well, it seems, and the leak says that the device will be 7.5mm thick, and that it will weigh 175 grams. As already mentioned, this leak does seem rather sketchy, so take it with a grain of salt, but if OnePlus decides to model the OnePlus 6 after the OPPO R15, then these specs are quite probably accurate, at least to a certain degree. The OnePlus 6 is expected to arrive in June, though nothing has been confirmed just yet. 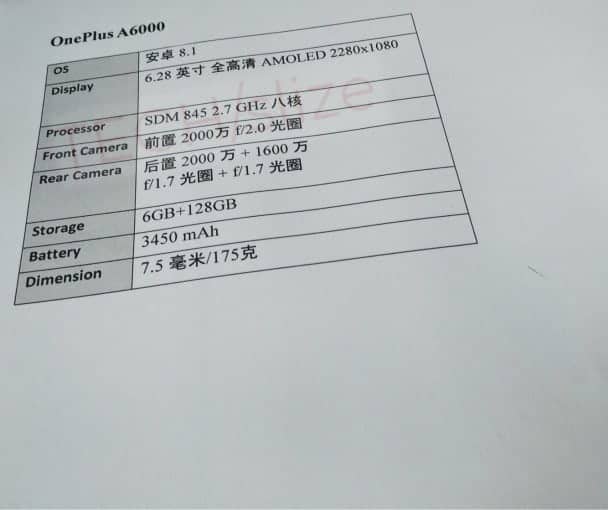