A concept render shows off what HMD Global’s upcoming Nokia 9 could look like. So far, the Finnish brand has mostly stuck to budget and mid-range smartphone offerings, with the only premium offerings being the Nokia 8 and the recently-announced Nokia 8 Sirocco. Recently, though, rumors surrounding a true flagship, dubbed the Nokia 9, have been gathering pace, and now a new set of renders give a glimpse at what could be expected from it based on the latest information.

Looking at the render, the most notable design choice is the bezel-less front panel, which incorporates a tall display that extends to the very top of the device. Because of this, a notch similar to the one featured on the new ASUS ZenFone 5 line sits above the display, incorporating two front-facing selfie cameras, a proximity sensor, and an in-ear speaker. Furthermore, the side bezels of the device are also reduced to a minimum, although the concept device does sport a small chin below that incorporates the Nokia brand name. Perhaps more interestingly, however, is the fact that the display is not curved on either side in a similar way to Samsung’s latest flagships. After all, the recently-announced Nokia 8 Sirocco sports a curved, dual edge display, so it would be surprising if the company chose to not include this on its eventual true flagship offering. In either case, other design features that can be spotted in the render are accented colors, something that has been previously seen on the Nokia 7 Plus, and an element that will likely be used to highlight the power and volume buttons, alongside the rear facing camera. Interestingly, though, the device isn’t expected to include a rear-facing fingerprint scanner. Instead, the latest rumors point towards an in-display sensor.

The Nokia 9 is expected to ship with Qualcomm’s Snapdragon 845 on the inside, alongside 6GB of RAM and 128GB of storage. Furthermore, a dual ZEISS-branded camera setup on the rear is set to accompany the previously mentioned front camera sensors, while in terms of software the device could launch with either stock Android 8.1 Oreo or Android P, depending on its release date. After all, recent rumors point towards a late-August or early-September release, coinciding with the expected release date of Android P. HMD Global is yet to confirm the existence of the Nokia 9, but if recent reports are accurate, the device could launch alongside a slightly cheaper Nokia 8 Pro. 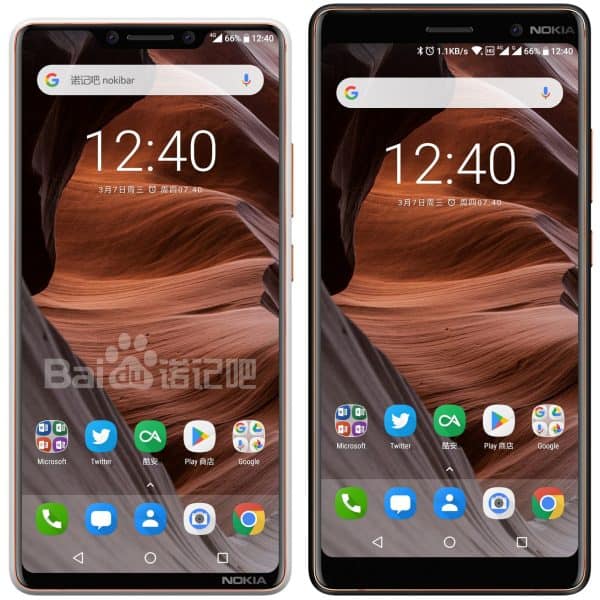