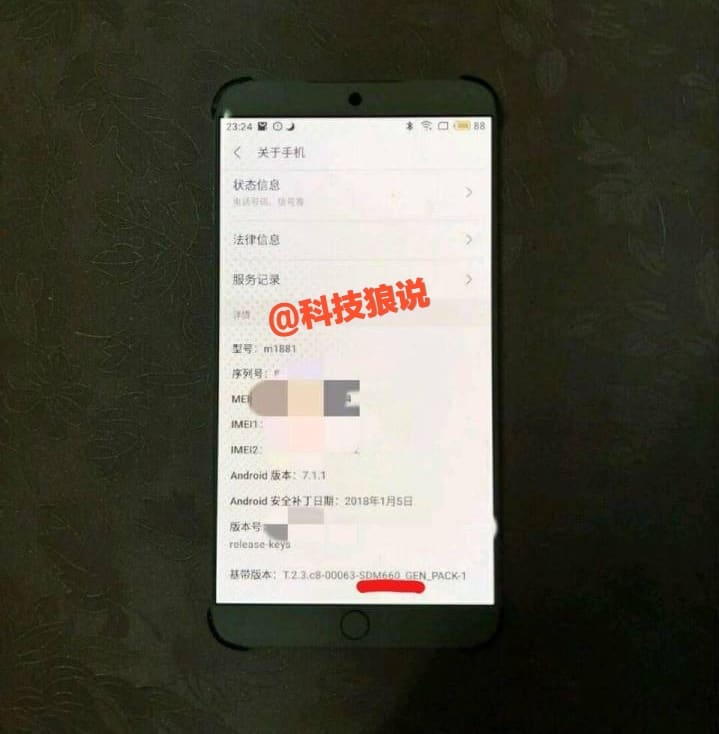 Three Meizu 15-branded smartphones surfaced in renders yesterday, and now a real-life image of the Meizu 15 popped up on Weibo. Interestingly enough, the source also claims that the phone will be fueled by the Snapdragon 660 64-bit octa-core SoC. The Snapdragon 660 is Qualcomm's mid-range processor, and this is not the first Snapdragon-branded SoC that Meizu uses in its smartphones, but the choice may surprise some people, despite the fact Meizu announced that its future phones will utilize chips from all major SoC manufacturers, including Qualcomm, Samsung, and MediaTek.

Having said that, many people have been expecting both the Meizu 15 and 15 Plus to ship with high-end processors, the Exynos 9810 or Snapdragon 845, but it seems like the Meizu 15 will include a mid-range chip instead. That probably means that the Meizu 15 Plus will include a flagship SoC, and if we had to guess, we'd say the Snapdragon 845, mainly because the Meizu 15 will include the Snapdragon 660, if this rumor is to be believed. In any case, the leaked image shows off a front side of the Meizu 15, and as you can see, the phone sports really thin side bezels, though its top and bottom bezels aren't exactly razor thin, quite the contrary. There seems to be a fingerprint scanner included below the display, and it remains to be seen if that is only a capacitive key, or will it reach to a physical press as well. The phone's front-facing camera seems to be centered above the display, which is also quite surprising.

Previous rumors suggested that the Meizu 15 and 15 Plus will ship with a side-facing fingerprint scanner, just like the Meizu M6S, but it seems like that will not happen. Thinner bezels were also expected when it comes to these two phones, so chances are that some consumers will be a bit disappointed if this ends up being the design of the Meizu 15 and 15 Plus, not to say that this design is ugly or anything, it may actually appeal to some people. The leaked image also reveals that the Meizu 15 will ship with Android 7.1.1 Nougat out of the box, well, at least this unit does.