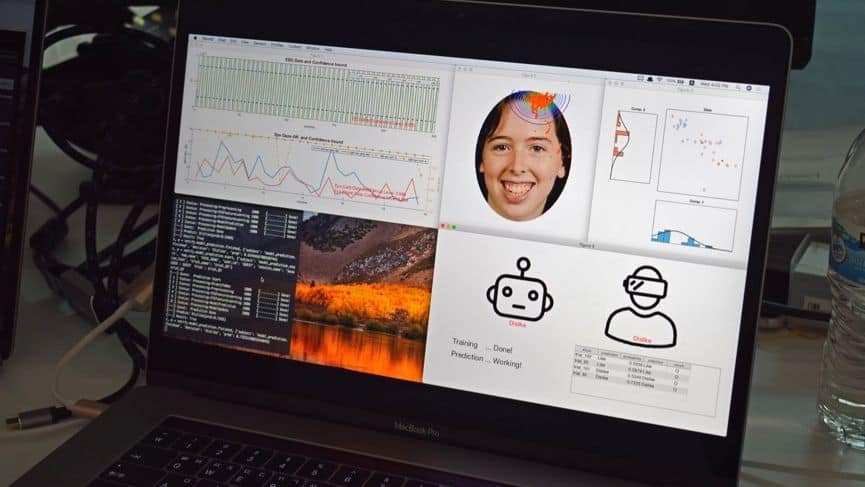 The engineers at Looxid Labs have apparently managed to create a VR headset that can accurately predict a user’s Tinder swipes before the user has even made up their mind. That’s according to reports from Wareable, whose reporters were able to get some hands-on time with the device during HTC’s Vive X accelerator program showcase. For its own device, Looxid began by customizing one of HTC’s VR headsets to include eye-tracking and brainwave scanning, before adding a healthy dose of machine learning to the mix. More specifically, the A.I. algorithm analyzes the movement of the wearer’s eyes and brain activity, while also tracking which features a given user tends to find attractive. It basically detects patterns in brain activity associated with a left or right swipe and begins compiling a profile of the user. That means that it started out relatively inaccurate. However, as time went by with a given user, selections became more on-point until no mistakes were made at all.

The implications of the as-yet-unnamed headset are fairly obvious and it should come as no surprise to intrepid followers of scientific research that such a feat can be accomplished. Scientists have conducted studies into the minuscule gap between physical or psychological responses and brain-based decision-making for quite some time. Having said that, there haven’t really been any practical applications for that knowledge. So, what Looxid’s experiment represents is a real-world use that could feasibly be altered and re-purposed to serve any number of situations. For example, real-time brain and eye tracking of this sort could be used for comprehensive employee training programs or as part of a grander scheme to make brainwave-based communications possible – something akin to Elon Musk’s Neuralink aspirations.

To that end, the company actually plans to start serving out developer kits for its VR and brain scan headset sometime this summer. The kits are discounted by 20-percent at $3000, so it’s definitely not going to be something for an indie game studio to pick up and code for. In fact, with dev kits costing that much and the prices of other VR technology just beginning to fall in price, it’s unlikely that these will be a consumer-level product at any point in the near future. Bearing that in mind, this is still a very interesting use for VR technology and a compelling look at just how strange the future could be.