New Huawei-branded handset with 512GB of internal storage has just surfaced on TENAA, with a NEO-AL00 model number. This smartphone also comes with 8GB of RAM, it runs Android, and it sports two SIM card slots, notes TENAA. The phone also comes with support for both TD-LTE and FDD-LTE bands. Having said that, this phone originally popped up on TENAA back on February 12, though the listing got updated on March 19, which is why we’re mentioning it again.

Having said that, the highest storage capacity in a smartphone, at least one that we’ve used / seen, has been 256GB, and this handset will, seemingly, sport 512GB storage out of the box, and possibly even a microSD card slot so that you can add even more storage to the phone. Now, Samsung had started manufacturing 512GB flash storage drives at the end of last year, so this Huawei-branded phone will almost certainly use one of those, but what phone is this? Well, we don’t really know, its model number is not saying much, but it’s not pointing towards the upcoming Huawei P20 smartphones, so chances are that none of those devices will ship with 512GB of internal storage. Huawei did, however, trademark the ‘MateX’ name in Europe last month, so it is possible that the company is getting ready to introduce a new Mate-branded smartphone which will ship with 6GB of RAM and 512GB of internal storage, as this listing suggests, but we’re only guessing at this point.

Huawei is getting ready to launch its new flagship smartphones, the launch event will take place on March 27 in Paris, and the company will announce the Huawei P20 and P20 Pro, while it will also talk about the P20 Lite mid-ranger which was announced quite recently in Poland. The Huawei P20 Pro will ship with a triple camera setup on the back, while the Huawei P20 will sport two rear-facing cameras. Both devices will be fueled by the Kirin 970 64-bit octa-core processor, sports Leica’s lenses, and come with high-end spec sheets. All P20 smartphones will include a display notch, and the Huawei P20 and P20 Pro will be made out of metal and glass. A ton of info surfaced when it comes to both of these devices, which is why we more or less know exactly what to expect. 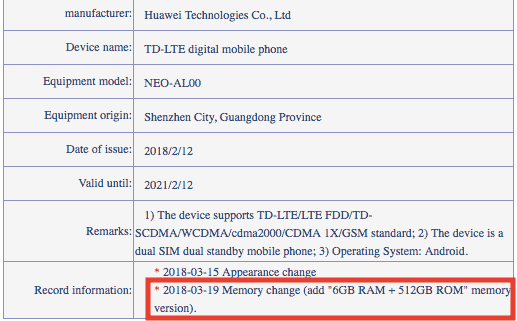