The Huawei P20 Pro will be announced on March 27, and the phone has just surfaced on Geekbench, it seems. The Huawei CLT-L29 appeared on Geekbench, and that model number more or less confirms we’re looking at the ‘Pro’ variant of the P20, though the listed specs also point in that direction. This listing appeared on Geekbench yesterday, and the listing claims that the phone will sport 6GB of RAM, and be fueled by a 64-bit octa-core SoC, which will be clocked at 1.84GHz. This is almost certainly the Kirin 970 64-bit octa-core processor, Huawei’s very own flagship chip, which already fuels the company’s Mate 10 flagship series of smartphones.

In addition to everything that was already said, Geekbench also reports that Android 8.1 Oreo will come pre-installed on the Huawei Mate 10 Pro, which means that Huawei may announce a new version of Emotion UI (EMUI) skin along with the device. Emotion UI 8.0 is based on Android 8.0 Oreo, so chances are we’ll see Emotion UI 8.1 launched with the Huawei P20 Pro, and Android 8.1 Oreo which will ship on the phone. We are still not sure what changes to expect in EMUI 8.1, as no info surfaced just yet, but chances are that Huawei will include some new features in this version of its skin. Having said that, the Huawei P20 Pro managed to score 1,921 points in the single-core benchmark on Geekbench, while the device hit 6,729 points in the multi-core test. That is pretty much all the info that Geekbench shared, but thanks to previous leaks, we do have more info regarding the device.

The Huawei P20 Pro will sport three cameras on its back, and if a rumor from earlier today is to be believed, it will ship with 40, 20 and 8-megapixel sensors, RGB, monochrome and telephoto cameras. Leica’s lenses will be a part of the package, and a fingerprint scanner will sit on the front side of the phone. This is actually quite odd, as the fingerprint scanner is expected to be included on the back of the Huawei P20, which will launch alongside the P20 Pro. The Huawei P20 Lite was announced quite recently in Poland, but the company will almost certainly talk about that device on March 27 as well. 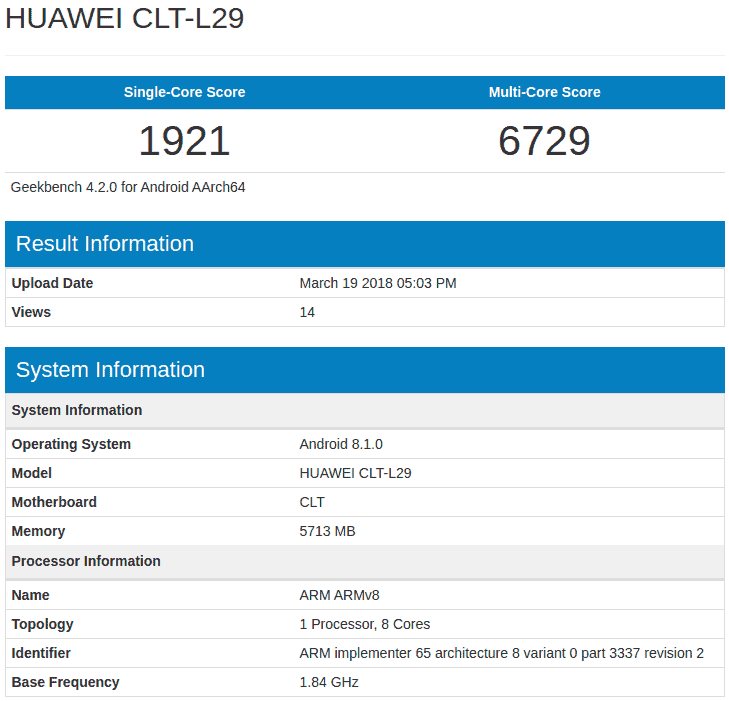