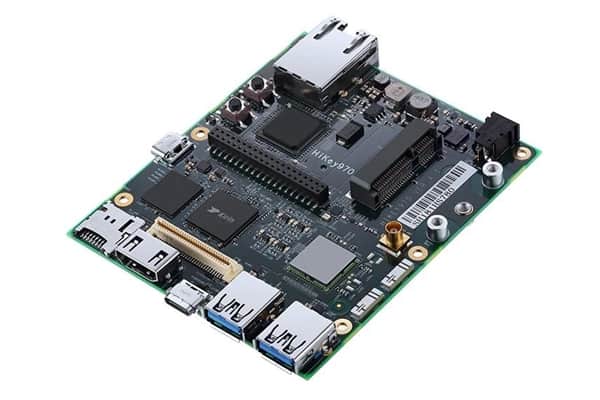 Huawei has introduced a new AI-powered development platform called the HiKey 970 during the Linaro Developer Conference which took place earlier this week in Hong Kong, and as the name suggests the new board is powered by the Kirin 970 SoC developed by Huawei’s chipset-manufacturing subsidiary HiSilicon. Evidently, the board also takes advantage of the NPU (Neural Processing Unit) embedded within the Kirin 970 chipset, and as a result, the product is being touted by Huawei as a great tool for developers wanting to create applications surrounding concepts such as smart cities, smart vehicles, robots, and deep learning.

As a development board based on the Kirin 970 chipset, the HiKey 970 offers a similar level of performance to the Huawei Mate 10 flagship which is powered by the same SoC. The board is evidently based on the ARM platform and as such, it can run software including Android, Ubuntu, and Debian. The Kirin 970 was manufactured by TSMC on a 10nm FinFET+ node and features four ARM Cortex-A73 high-performance CPU cores clocked at up to 2.36GHz, coupled with four additional Cortex-A53 energy efficient cores operating at a frequency of up to 1.84GHz. The processor takes advantage of heterogeneous resource management which should allow the system to choose which cores operate independently or together at a given time. There’s also a Mali-G72MP12 graphics chip which should support up to 4K resolutions through an HDMI 2.0a port, and judging by the press photos the board should also feature two full-sized USB 3.0 ports, two USB Type-C connectors, an Ethernet port, and a microSD card slot. It’s worth noting that because the platform includes a dedicated NPU which supports AI stacks, the HiKey 970 developer platform promises to deliver up to 50 times higher energy efficiency and up to 25 times better performance while performing AI operations compared to the standard CPU.

The HiKey 970 is expected to be available for purchase in mid-April but pricing details are currently unknown. However, considering the fact that Huawei’s and Linaro’s HiKey 960 single-board computer was released in April of 2017 for the price of $239, it’s likely that the new model will be priced in a similar bracket, though it should be reminded that the previous model lacked on-board AI capabilities. 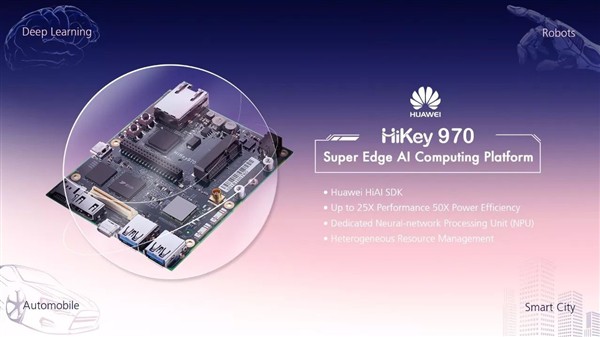