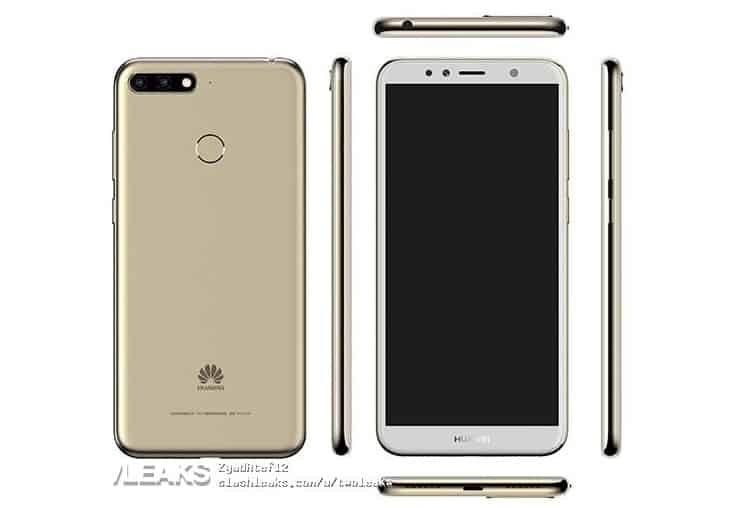 According to a recent leak, Huawei is preparing to release a new smartphone by the end of the month, and the device appears to take the form of a new lightweight variant of the Honor 7C. The image above allegedly shows the Huawei Enjoy 8e, and for context, it’s worth reminding that the Honor 7C is known in China as the Huawei Enjoy 8. With that being said and according to the source, the Enjoy 8e shares many similarities with the existing Huawei Enjoy 8/Honor 7C, both inside and out, but features a slightly smaller display and a less powerful chipset.

Starting off with the design, the Enjoy 8e looks very much like the Honor 7C but while the latter has a metal unibody design, the former seems to feature a shiny metallic frame separating the front and back panels. Other than that, the alleged Honor 8e has similar camera housing and placement of the rear-mounted fingerprint sensor, as well as the same hardware button layout and front panel design. The main exception, aside from the metal frame, lies in the fact that the Enjoy 8e is branded as a Huawei device as opposed to an Honor smartphone, indicating that the renders at hand portray a model intended for the Chinese market. As for its hardware specifications, the Huawei Enjoy 8e reportedly features a slightly larger 5.7-inch display with a resolution of 1440 by 720 compared to the Honor 7C’s 5.99-inch panel, and is apparently powered by the Qualcomm Snapdragon 430 chipset instead of the Snapdragon 450 silicon. The former SoC was launched in 2016 and features eight ARM Cortex-A53 CPU cores clocked at up to 1.4GHz and the Adreno 505 graphics chip, whereas the newer Snapdragon 450 introduced last year features eight similar CPU cores operating at a higher frequency of up to 1.8GHz and the Adreno 506 GPU.

Lastly, if the leak is accurate, the Huawei Enjoy 8e should offer 3GB of RAM, 32GB of on-board memory, a 13-megapixel main camera coupled with a 2-megapixel sensor, and a 5-megapixel front-facing shooter. The device will run Android 8.0 Oreo out of the box and house a 3,000mAh battery in a body measuring 152.4 × 73 × 7.8mm and weighing 150 grams. According to the source, the Huawei Enjoy 8E should be officially launched on March 30 when it will become available for purchase for the price of 1,099 yuan ($173).