A device bearing the model number SM-N960U that’s widely believed to be the upcoming Galaxy Note 9 has been prematurely listed by a number of Samsung’s regional websites, having first been spotted by Romanian tech blog Androidru. The same model name has already been sighted on Geekbench earlier this week, having been attached to a version of the device powered by Qualcomm’s Snapdragon 845, the same silicon found inside the newly released Galaxy S9 and Galaxy S9 Plus. Due to that state of affairs, the variant in question is likely meant to be sold in the United States, Canada, and China, as has been the case with most other Snapdragon-equipped Galaxy flagships, bar the 2015 Galaxy Note 5.

Samsung appears to have already removed the mentions of the SM-N960U from its regional websites which were previously found within its support pages, as evidenced by the screenshot below. The listings suggested the upcoming device will be equipped with an S Pen stylus which will have a replaceable tip, as was the case with all previous members of the high-end Android phablet series. The aforementioned benchmark listing also indicated the Galaxy Note 9 will be equipped with 6GB of RAM and run Android 8.1 Oreo out of the box, with its firmware most likely being a new implementation of the company’s proprietary Samsung Experience suite. The international model of the device that’s expected to be powered by the Exynos 9810 is likely to be identified as the SM-N960F.

The Galaxy Note 9 should look similar to the Galaxy Note 8, just like the Galaxy S9 lineup is akin to the Galaxy S8 series save for having shallower curved screen edges. The South Korean tech giant is only expected to attempt radically redesigning its flagship offerings next year starting with the Galaxy S10 family. The upcoming stylus-equipped phablet is rumored to sport a 3,850mAh battery and may end up shipping with an in-display fingerprint sensor that Samsung was still trying to implement as late as this month despite facing many technical difficulties to doing so, according to recent reports. Much like its predecessors, the Galaxy Note 9 should debut in late summer, possibly at IFA 2018 which is scheduled to start on August 31. 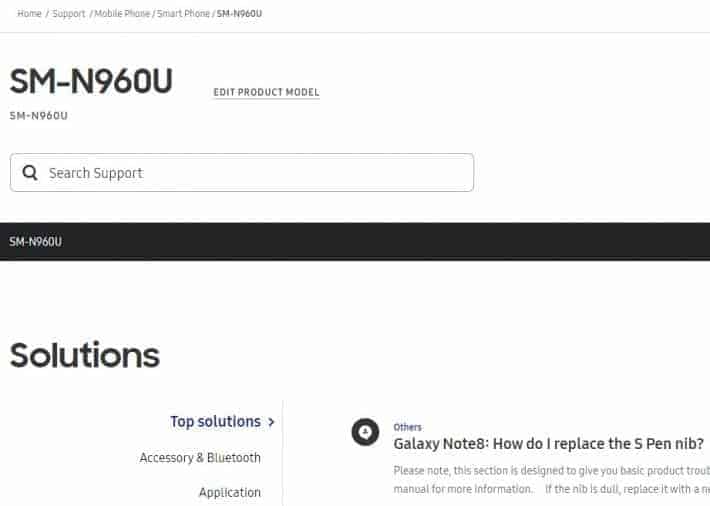