Samsung could be working on yet another Galaxy J device that will further expand its Galaxy lineup of smartphones. The South Korean giant is said to be deep into the development phase of its upcoming Galaxy J (2018) series, with recent leaks pointing towards a wide range of devices. Now, thanks to a new Geekbench listing, it appears the company is working on a new range-topping model, dubbed the Galaxy J8.

This new device, which goes by the model number SM-J800FN, is listed as including Samsung’s own Exynos 7870, a processor that scored 728 points in the single-core test, 3,683 points in the multi-core one, and is coupled with the Mali-T830 GPU. Furthermore, the benchmark listing shows 3GB of RAM as being paired with the setup, while on the software side of things, Android 8.0 Oreo is said to be on board. The results of the tests put the Galaxy J8 on par with the rumored Galaxy J6, a device that was also recently spotted with the exact same processor, although it was coupled with a lower RAM count of 2GB. If released, the new Galaxy J6 and Galaxy J8 will join the updated versions of the Galaxy J3, J5, and J7 which are expected to launch later on in the year, as well as the recently-spotted Galaxy J4, which will further expand the Galaxy J (2018) lineup. Samsung is yet to confirm the existence of any of its upcoming Galaxy J (2018) smartphones, however, considering the recent move up the price chain of Samsung’s Galaxy A series, the South Korean giant may be looking to expand its budget phone portfolio to occupy the newly-empty pricing brackets. If the company chooses to expand the lineup in this way, though, it’ll remain to be seen if it also adopts the company’s new Infinity displays.

Currently, however, it appears Samsung main focus is selling its recently-announced Galaxy S9 lineup, which once again sports the company’s trademark Infinity displays. Furthermore, the company has also listened to customer feedback and has moved the fingerprint scanner in order to make it more accessible. The devices also debut a new variable aperture camera, which should improve low-light photography performance significantly, while the Galaxy S9 Plus variant justifies its higher price tag with a secondary telephoto lens, allowing for a certain degree of optical zoom. 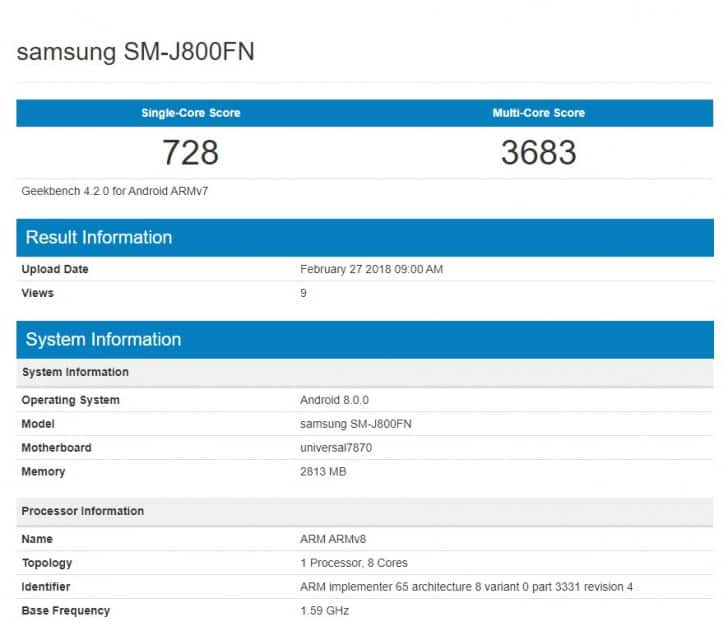