The next model in the Galaxy J7 series appears to be in the works as a new Samsung-branded device running Android 8.0 Oreo and bearing the model number “SM-J737P” was recently discovered in the database of the benchmarking tool Geekbench. According to the benchmark entry, the device which is likely to hit the shelves under the name of “Samsung Galaxy J7 (2018)” makes use of the same chipset that was recently employed by the OEM’s Galaxy A8 (2018) lineup, namely the Exynos 7885 SoC.

The aforementioned silicon comprises two ARM Cortex-A73 CPU cores clocked at up to 2.2GHz, coupled with six additional ARM Cortex-A53 CPU cores operating at a frequency of up to 1.6GHz. The processor is fairly new and was introduced only earlier this year, so at the time of this writing, there are only two Samsung smartphones equipped with this particular chipset, both of which are part of the Galaxy A8 (2018) lineup which launched in the United States near the beginning of the year. In any case, the CPU is paired with 2GB of RAM out of which roughly 1.6GB are available to the user, and while running Android Oreo the device was able to score nearly 2,000 points in the Geekbench single-core test as well as a little over 3,800 points in the multi-core benchmark. No other details were revealed by the benchmarking tool and the “Samsung Galaxy J7 (2018)” moniker is unmentioned, however, it’s likely that the device will be known officially as the Galaxy J7 (2018) judging by its model number “SM-J737P” and the fact that previous iterations in the series were identified by model numbers including the “SM-J700,” “SM-J710” and “SM-J730.” Also worth mentioning is that the original Samsung Galaxy J7 introduced in 2015 for Virgin Mobile and Boost Mobile was identified by the model number “SM-J700P” so given the “P” suffix used by the recent version of the phone spotted in Geekbench, the “SM-J737P” could also be a variant destined for the aforementioned US-based network operators.

Over the past few years, devices in the Samsung Galaxy J7 series were introduced in spring or summer between the months of March and June, so while there’s no official word on when the Samsung Galaxy J7 (2018) might hit the market, recent history suggests that an official announcement pertaining to the new device’s release could take place in the coming weeks at the earliest, or sometime this summer at the latest. 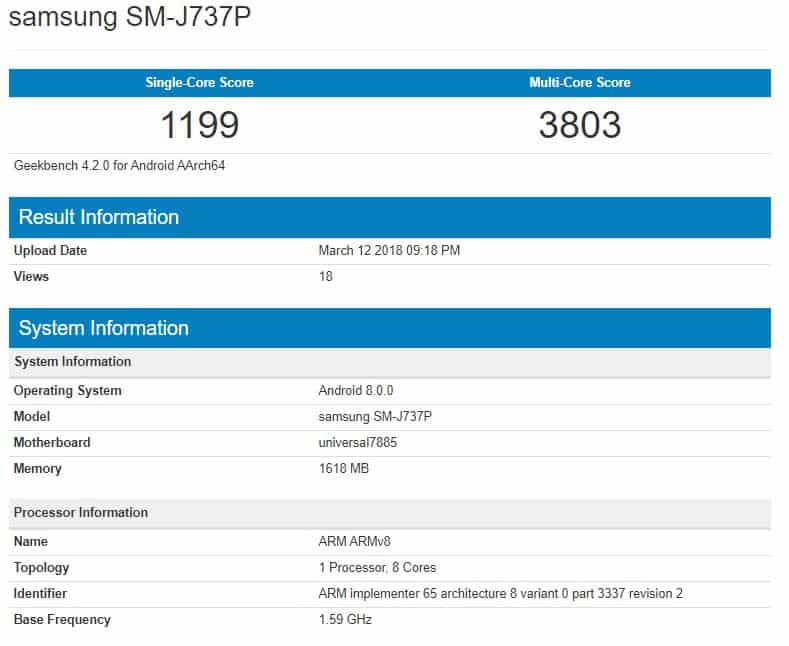