A set of results on Geekbench appear to reveal a number of specs related to the ZTE Blade V9, a device that is set to be unveiled at Mobile World Congress. The upcoming smartphone is expected to be the company‘s next offering in the mid-range segment, although it’s rumored to take some design elements from slightly more high-end offerings. Nonetheless, in the spec department, the device is rumored to enter into direct competition with Motorola’s Moto G6 lineup, something that is further confirmed by the Geekbench listing.

In terms of the benchmark, the ZTE Blade V9 has scored 3931 points in the multi-core test, while its single-core results sit at a respectable 772 points. These scores are the result of the octa-core Snapdragon 450 processor which was announced back in June of last year and is said to be under the hood of ZTE’s device, while Qualcomm’s Adreno 506 GPU is included. Sitting alongside the chipset is 3GB of RAM, according to the Geekbench information, something that should put the Blade V9 on par with Nokia’s yet-to-be-launched Nokia 4. Aside from the information provided by the Geekbench results, the ZTE Blade V9 is rumored to also be available in 2GB and 4GB RAM variants, which will be coupled with 16GB and 64GB of internal storage respectively. In the case of 3GB RAM model, 32GB of storage is rumored to be included. In terms of the device’s design, the Blade V9 is expected to offer a glass-centric build, with an aluminum frame wrapping around the side. Adorning the front panel of the device is rumored to be a large 5.7-inch display which, just like recent trends, will adopt the taller 18:9 aspect ratio. Detail-wise, the panel is said to sport a 2160 x 1080p FullHD+ resolution. In terms of the rear, ZTE is rumored to have placed a fingerprint scanner towards the center of the panel.

Speaking of the rear panel, the phone is also rumored to come with a dual-camera setup, though the pixel count of the two sensors is yet to be revealed. In terms of software, ZTE appears to have opted for the latest version of Android according to the Geekbench listing, that being Android 8.1 Oreo. The device should come with a 3,200mAh battery if the benchmark is correct, and though the phone hasn’t officially been announced yet it’s suspected go on sale at just above $200. 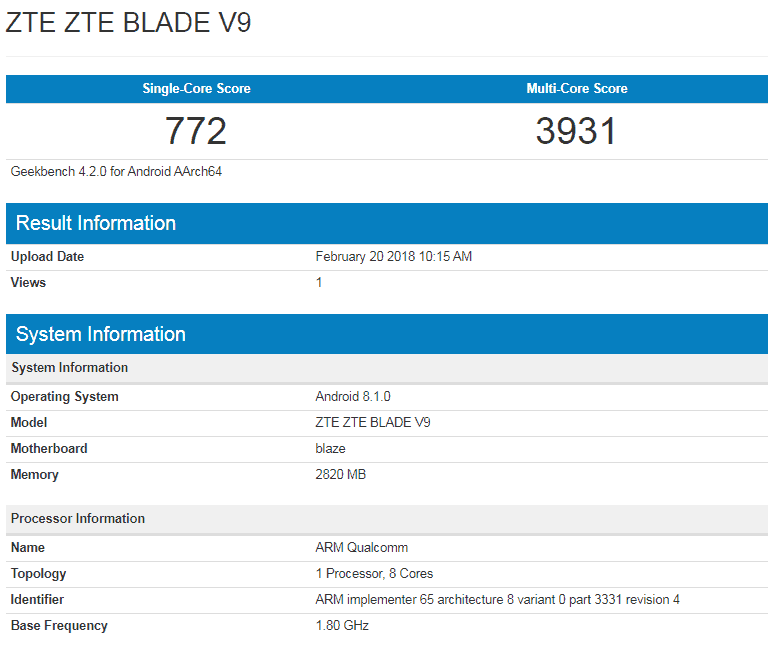