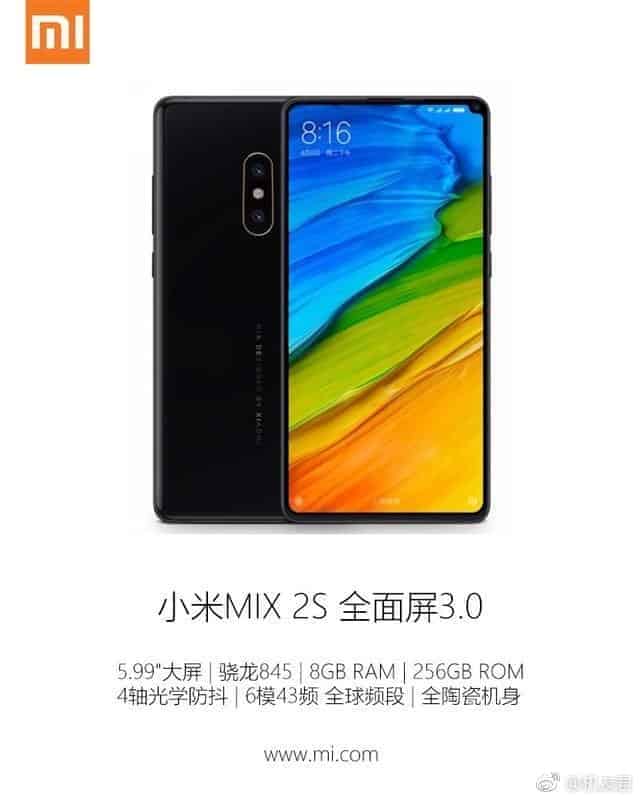 The Xiaomi Mi 2S has just surfaced yet again, this time around, we get to see the phone's partial spec sheet, and an actual render of the device. The Xiaomi Mi 2S sketches surfaced quite recently, along with the phone's specs, not to mention that the device got benchmarked by AnTuTu quite recently as well. Having said that, if you take a look at the provided image above, you will be able to see an almost bezel-less handset, as the leaked specs suggested, read on.

As you can see, other than the front-facing camera, which is located in the upper-right corner of the phone's display, and it breaks the design a bit, this phone's bezels seem to be equally thick on all sides, and they're quite thin, actually. All the physical keys are included on the right side of the device, which probably means that a SIM card tray lies on the left. A dual camera setup is placed on the back of the phone, and in between those two cameras, you will notice an LED flash. A fingerprint scanner is not located on the back of the device, and it's also not visible on the front either, which probably means we're looking at an in-display fingerprint scanner here, presuming this render is accurate, of course. Now, along with this render, some specs surfaced, and if the provided info is accurate, the Xiaomi Mi MIX 2S will ship with a 5.99-inch display, just like the Xiaomi Mi MIX 2, and that will probably be a fullHD+ panel.

Qualcomm's Snapdragon 845 64-bit octa-core SoC will fuel the Mi MIX 2S, says the leaked image, and that is Qualcomm's most powerful SoC to date. The device will include 8GB of RAM and 256GB of native storage, at least this variant will, and the leaked image also mentions full-screen design 3.0, as this is the third iteration of the company's Mi MIX handset, at least it's expected to be. A leak which surfaced a couple of days ago hinted that the phone will be made out of ceramic, well, at least this 8GB RAM variant will be, while dual 12-megapixel cameras have also been mentioned a couple of days ago. Xiaomi probably won't introduce this phone during MWC 2018, but it could arrive during a separate event before or after MWC.