The Xiaomi Redmi Note 5 Pro is made out of metal, it sports a rear-facing fingerprint scanner, and a vertically-aligned dual camera setup. The phone’s dual camera setup is actually reminiscent of the dual camera setup on the iPhone X, at least in terms of the design. A dual-LED flash is placed in-between the phone’s rear-facing cameras, and the device sports relatively thin bezels, while its display sports rounded corners. The device features a 5.99-inch fullHD+ (2160 x 1080) display with a 2.5D curved glass on top of it. The phone is fueled by the Snapdragon 636 64-bit octa-core processor, while the phone also packs in 4GB or 6GB of LPDDR4X RAM, depending on which variant you opt to purchase. Both of those variants are accompanied by 64GB of internal storage, which is expandable, by the way, up to 128GB via a microSD card. Speaking of which, you can insert that microSD card into one of the two SIM card slots, as this phone features a hybrid dual SIM setup (2x nano SIM).

12-megapixel (Sony’s IMX486 sensor, 1.25um pixel size, f/2.2 aperture, PDAF) and 5-megapixel (1.12um pixel size, f/2.0 aperture) snappers are placed on the back of this phone, while a single 20-megapixel camera (Sony’s IMX376 sensor, f/2.2 aperture) is included on the phone’s front side, and it can shoot Xiaomi’s AI-based portrait selfies. Face Unlock will also arrive to the Redmi Note 5 Pro via an update, and that feature will utilize the front-facing camera as well. A 4,000mAh non-removable battery is included in this package, and the same can be said for an IR blaster. Android 7.1.2 Nougat comes pre-installed on the phone, along with Xiaomi’s MIUI 9 skin, while the device measures 158.6 x 75.4 x 8.05mm, and weighs 181 grams. The Redmi Note 5 Pro comes in Black, Gold, Rose Gold and Blue color variants, and its two models are priced at Rs. 13,999 and Rs. 16,999 in India. A first sale of the Redmi Note 5 Pro will kick off on February 22, and the device will be available exclusively from Flipkart. 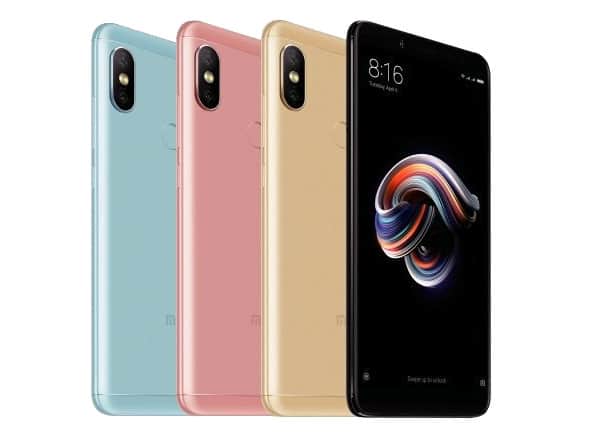