According to a new survey, those with a visual impairment on average tune-in to TV nearly as much as the general public. The survey was conducted by Global Strategy Group, and on behalf of Comcast and the American Foundation for the Blind (AFB). The survey was based on data collected between October 9 and November 27, 2017, from 626 visually impaired adults. Of which, 277 were identified as having “no functional vision.”

According to the findings, 96-percent of surveyed individuals “watch TV on a regular basis.” This percentage drops down to 81-percent when it comes to how many tuned-in to TV for more than one hour per day. Likewise, the percentage drops down to 55-percent when it comes to those who tune-in to TV for fours hours (or more) per day – a percentage which highlights that of those surveyed, more than half are highly active TV users. The four-hour number in particular is the one to focus on when making comparisons to the “general public” as the study draws its comparative data from a 2016 Nielsen study which found adults on average consume just over five hours of TV per day. It does also need to be pointed out that both the current study and the Nielsen one are specific to the TV habits of American adults.

One of the reasons the study was seemingly undertaken was to highlight the various assistive features that are now on offer to visually impaired TV users. In fact, the survey showed that in spite of the high levels of engagement, a lesser number (less than 50-percent) of those surveyed were actually aware of the existence of assistive technologies, including Talking TV Guides. This was in spite of 65-percent of respondents noting how they have found “looking up what’s on TV” to be a problem. While 53-percent were noted as encountering problems when “following along with key visual elements” something that video description services (VDS) looks to assist with – and something which NBC and Comcast recently announced as available to those wanting to tune-in to the 2018 Winter Olympics, currently taking place in PyeongChang, South Korea. The study, therefore, looked to highlight the disconnect between visually impaired TV users and the availability of information on features designed specially for those same users. A summary of the survey’s findings can be seen in the infographic below. 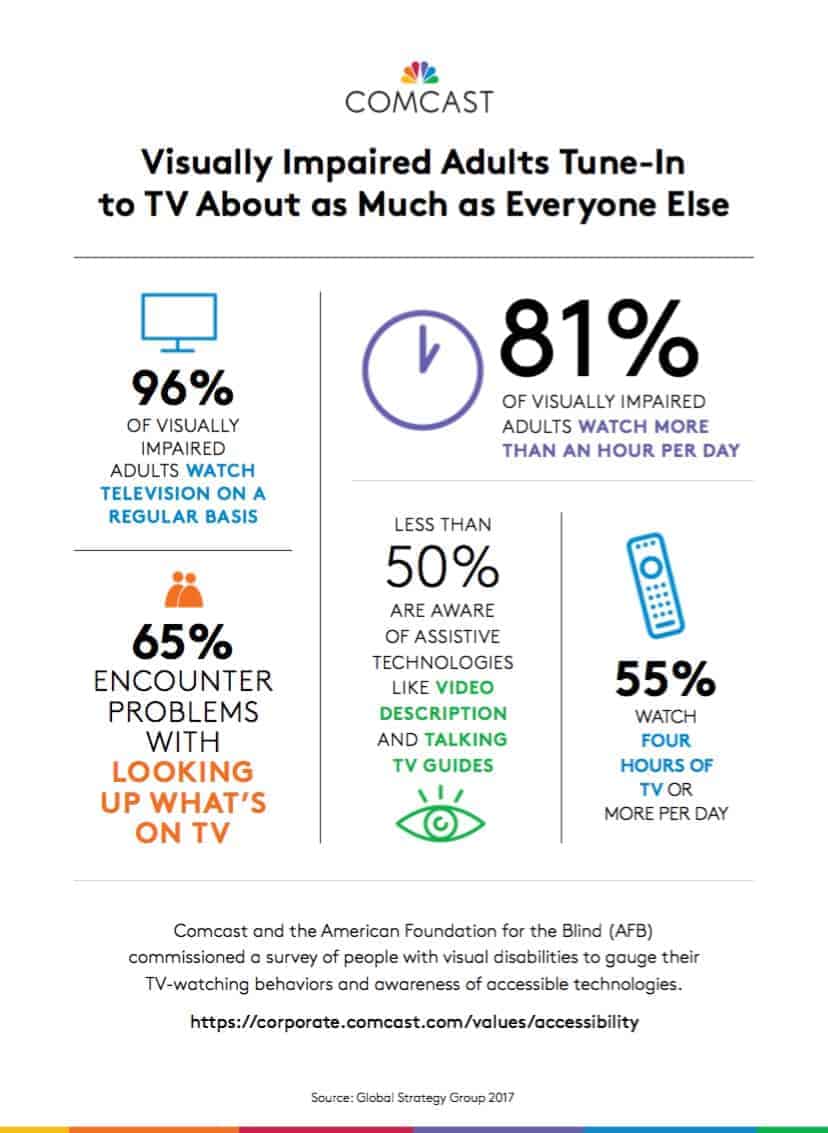