Mobile devices have become a vital part of everyday life for a lot of people. So discovering that there’s been a drop in cell signal just when a call needs to be made or a message sent can be a hassle under the best circumstances and a real nuisance in others. Since smartphones have effectively replaced landlines, there are also a ton of circumstances that can happen in, whether that’s moving to a new neighborhood or taking a road trip. To help alleviate the problem, and in a bid to promote their signal boosting products, SureCall has now revealed 10 tips to aid users in making calls even when their cell signal begins to fade. Some of the tips are likely to be a bit obvious and, of course, they won’t work under every circumstance. Regardless, they are also completely free and bound to be useful to at least some smartphone users who may want to get more out of their smartphone and cell service under less than optimal conditions.

Up first, SureCall points out that signal strength can come down to location. Nearly everybody has experienced moments where the cell signal seems to be there but doesn’t penetrate throughout the entire house. In those cases, it can actually be helpful to move near windows or other openings to the outside. Since radio signals have a notoriously difficult time penetrating walls, it’s helpful to put as few as possible between the cellphone’s antennas and the nearest tower. That’s true whether a user happens to be at the edge of a tower’s range or there just happen to be a lot of buildings around. Furthermore, those signals can be interfered with by others in the immediate vicinity, so users should try to distance themselves from other cell phones, Wi-Fi equipment, and similarly connected hardware. Meanwhile, it’s also true that the higher up a user moves, whether that’s within a building or outside, the more likely line-of-sight with a tower can be achieved. Line-of-sight will improve the range a signal can travel between tower and device.

Meanwhile, it’s equally true that the problem with a signal is related to the device hardware itself. For starters, how the device is being held can severely impact its ability to send and receive a signal. That’s most likely obvious, with consideration for the number of times a device has been released over the past few years with antenna placement not being well thought out. In most cases, the antenna’s are built into the edges of a smartphone – and along the top of the back, as well – so users should try to avoid touching those edges when making a call. Beyond that, antenna and radio hardware can also be impacted by how charged a given device’s battery is. In fact, some devices will even send less power to the respective radios when charge begins running low. The result of that is that the device does not send or receive signals quite as well as it might otherwise do. So something as simple as charging up a device can drastically improve reception.

Software associated with the radios also needs to be considered for several reasons, including at least one that’s similar to the battery tip listed above. By running a ton of applications in the background, a handset is forced to route some of its processing and battery power to those apps instead of to the task of making a phone call or sending a message. So it can be helpful in some circumstances to simply close all other applications and to clear recent apps. If that still doesn’t have the desired results, it may be that the networking software needs to be rebooted. The easiest way to accomplish that is by turning on airplane mode for no less than 5 seconds before turning airplane mode off. That will shut down the radios and allow them to reboot, as well as forcing the device to seek out new towers – in case it just happened to miss connecting to one that has a stronger signal.

Finally, users should keep in mind that Wi-Fi is always an option and so is borrowing a cell phone from somebody else, especially in emergency situations. The latter tip is most likely to only be useful in a real emergency. Asking somebody to use their smartphone can be a stressful affair under the best circumstances. However, Wi-Fi calling is also available on nearly all of the top-tier devices and on most of even the cheapest Android handsets. That means that home internet can be used to make and receive calls or users can find a retail or service location nearby, such as a Starbucks, to make a call over a Wi-Fi connection. The quality of VoIP calls is, it goes without saying, not always the best. But it should work well enough in a pinch or even for normal usage if that signal is strong enough. Wi-Fi can also be used to search out towers via various dedicated websites so that users can simply move nearer to a tower or to a location where line-of-sight is more clear.

If all else fails and none of those cost-free tips work, there is always the option to buy and install a cell signal booster, such as those sold by SureCall. It goes without saying that cell signal boosting equipment is not the cheapest solution included here and boosters don’t generally work if there is not already at least a weak signal to be boosted. However, if having reception is a must and the signal just isn’t strong enough, it is a viable option. SureCall’s Boosters are made to work at home, in the office, or even in the car. Cost and installation process for each can vary but each is effectively comprised of a device to receive the weak signal, another to amplify that, and a third device to put out a bolstered signal, which also acts as a receiver. Prices for each of those solutions range from $299.99 sale pricing for smaller systems and in-car systems up to over $3,000 for a system which covers larger office spaces. Best of all, the company also sells add-ons for the kits and all of the tools needed for installation – as well as providing easy to follow instructions for each kit. 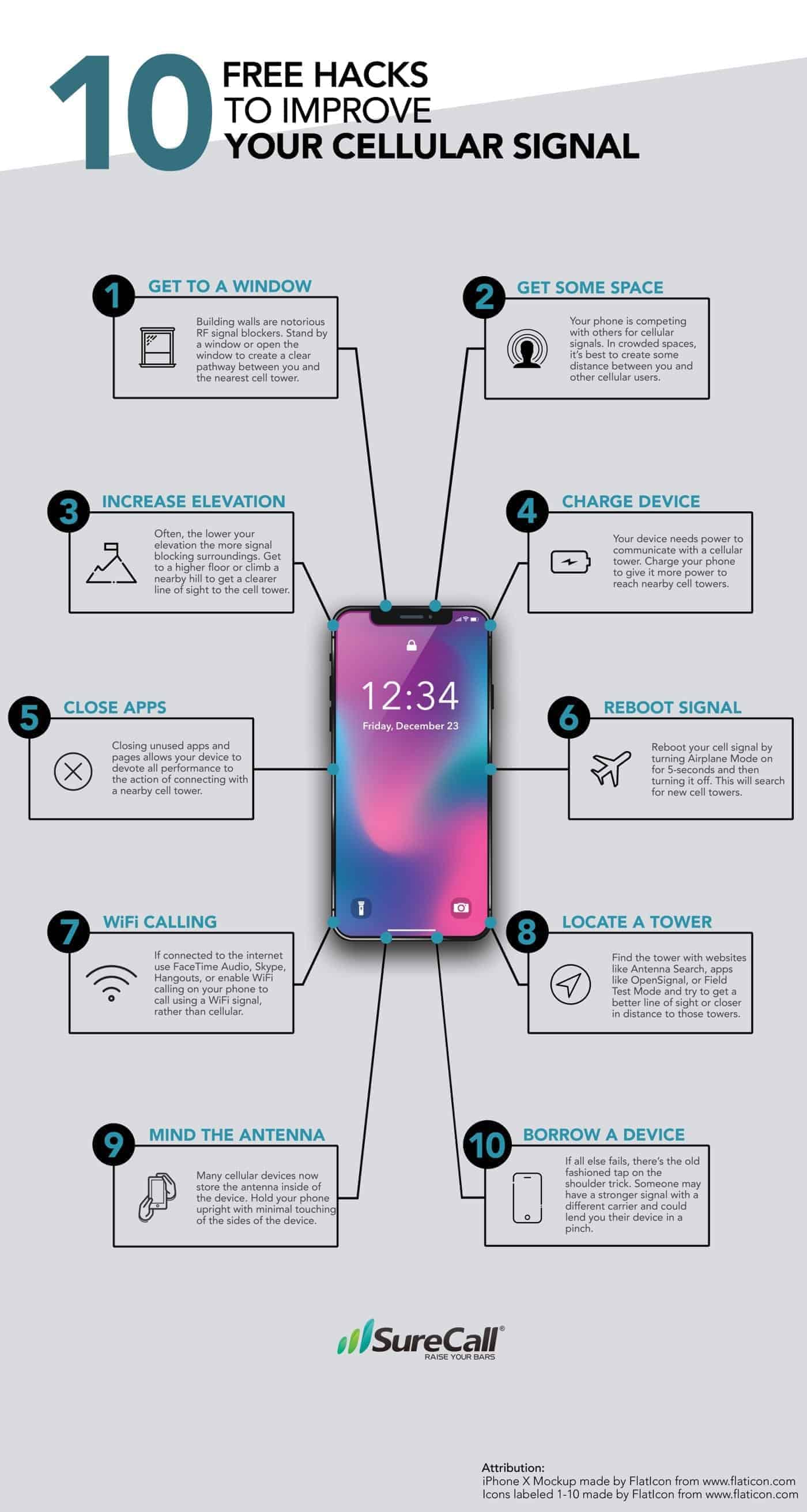