A leaked screenshot depicting the HTML benchmark results of an unreleased Sony smartphone has linked the “H8116” model number with the Sony Xperia XZ2 Pro moniker. Evidently, this suggests that the Japanese OEM is working on a multitude of devices as part of the upcoming XZ2 series, and the Pro model will presumably sit at the top of the range carrying the most impressive hardware components. Although hardware details are scarce at the time of this writing, the Sony Xperia XZ2 Pro is said to become the world’s first smartphone to feature a 4K OLED display.

To be precise, in the leaked screenshot the benchmark shows a display resolution that is too low to be taken in consideration as a valid option for a 2018 smartphone, let alone a top-tier flagship seemingly powered by the latest version of Android OS. After ignoring this error, it’s worth reminding that this would not be the very first 4K smartphone in the world, as Sony had previously secured this title with the launch of the chrome-flavored Xperia Z5 Premium back in 2015, but that particular flagship made use of LCD display technology whereas the upcoming Xperia XZ2 Pro is rumored to make the jump into OLED territory. In any case, according to a leaked HTML benchmark result, the Sony Xperia XZ2 Pro a.k.a. H8116 runs Android 8.1.0 Oreo out of the box, though the software will likely be partly covered by Sony’s own proprietary Android skin.

No other hardware details were mentioned by this leaked screenshot, but according to reports, the Sony Xperia XZ2 Pro should be powered by a Snapdragon 845 chipset from Qualcomm, which is unsurprising given that the majority of this year’s upcoming premium smartphones will employ Qualcomm’s aforementioned solution. Moving on, the chipset will reportedly be coupled with 6GB of RAM which should be enough for any multitasking needs, and the device will carry 64GB of on-board memory. The back of the phone will presumably be entirely or partly covered in glass, or any other material that supports wireless charging – sans metals – and the back panel will apparently accommodate a 12-megapixel dual camera configuration. The Sony Xperia XZ2 Pro might be scheduled for an official unveiling at MWC 2018 in Barcelona near the end of February. 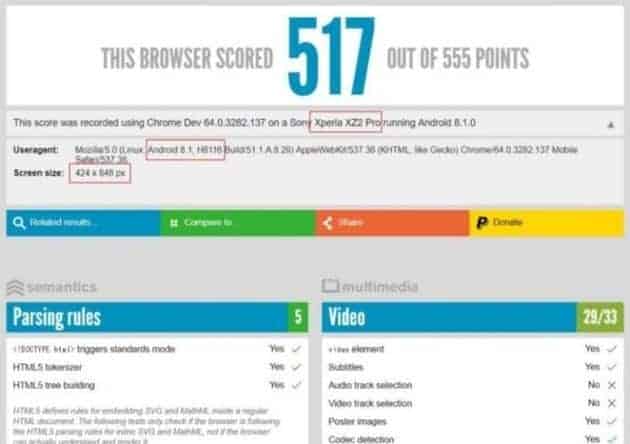