An Android device identified as the Sony H8266 was spotted in the database of mobile benchmarking service AnTuTu earlier today, with its supposed specs placing it in the flagship segment of the smartphone market. The handset that’s likely to launch as part of Sony’s main Xperia brand is powered by the Snapdragon 845, the most capable system-on-chip ever produced by Qualcomm, with the same piece of silicon being expected to fuel the vast majority of ultra-premium Android devices set to be released over the course of this year. The high-end chip is backed by 4GB of RAM and 64GB of internal flash memory, presumably expandable via a microSD card, according to the benchmark.

The same listing reveals the Sony H8266 is equipped with a tall display panel featuring an FHD+ resolution of 2,160 by 1,080 pixels amounting to an 18:9 (2:1) aspect ratio. The device hence isn’t expected to be Sony’s most premium mobile offering in 2018 and shouldn’t be a direct successor to the Xperia XZ Premium whose product line has solely consisted of 4K handsets for several years now. Instead, the Sony H8266 may be advertised as a more accessible flagship for people who are willing to compromise on screen fidelity in order to save some money but still expect high-end performance from their pocket companions. While Sony’s Mirai design language was previously rumored to be sticking with the 16:9 aspect ratio despite having smaller bezels, the H8266 either won’t fully embrace it or previous reports about the matter have been inaccurate. By most accounts, the newly benchmarked handset will be a smartphone that follows all of the latest industry trends, including an elongated image format and relatively minimal bezels.

The device was benchmarked while running Android 8.0 Oreo, presumably enhanced with Sony’s lightweight mobile software suite. According to previous leaks, the Sony H8266 will feature a 3,240mAh battery with Qnovo Adaptive Charging Support and IP68-certified resistance to dust particles and water. While the Japanese OEM is likely to announce the H8266 at MWC 2018 in late February, its offering isn’t expected to be released before mid-2018 due to its SoC of choice; as was the case in previous years, Samsung is once again the reason for an industry-wide shortage of Qualcomm’s latest premium chip as it has reportedly reserved the initial batches of the Snapdragon 845 for its Galaxy S9 flagships which are also scheduled for an unveiling at the Barcelona-based trade show. 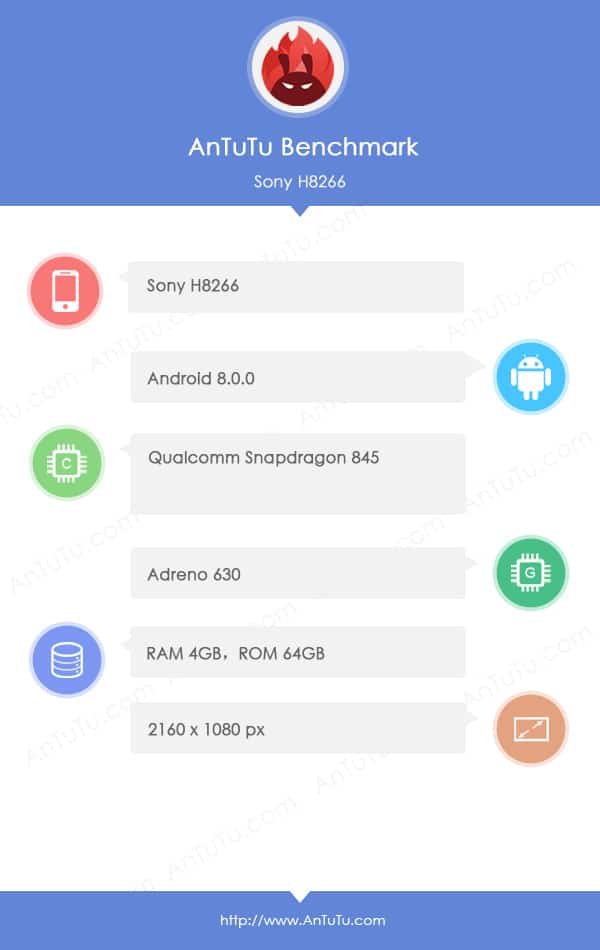