Samsung appears to be working on yet another Android Oreo-based smartphone that’s seemingly part of the expanding Galaxy J lineup and was recently identified by the model number ‘SM-J600F’ by online benchmarking tool Geekbench. Given the model number, the handset is likely to be commercialized under the name of Samsung Galaxy J6, and as far as hardware specifications go, the SM-J600F appears to share some similarities with the Samsung Galaxy J5 (2017) released last June.

Like the Galaxy J5 (2017), the newly discovered SM-J600F employs Samsung’s in-house Exynos 7870 chipset which comprises eight ARM Cortex-A53 CPU cores clocked at up to 1.6GHz, along with an ARM Mali-T830 graphics chip. Likewise, the silicon is paired with 2GB of RAM, and as far as performance in the Geekbench synthetic environment is concerned, the device yields a little over 720 points in the single-core test, and an average of around 3,600 points in the multi-core benchmark, which is in line with a product expected to compete in the lower mid-range market segment. In terms of software, similarly to the Samsung Galaxy J4 discovered in the database of the same benchmarking tool earlier this month, the Samsung Galaxy J6 (SM-J600F) runs Android 8.0 Oreo out of the box, but as is the case with the rest of the Korean OEM’s smartphone lineup, the mobile operating system will have a proprietary user interface.

Other hardware specifications go by unmentioned by Geekbench, but it’s interesting to note that this year Samsung is seemingly planning on expanding its Galaxy J budget series with additional models. Aside from the new Galaxy J5 and the aforementioned Galaxy J4, the OEM also seems to be developing the Galaxy J8 (2018) which was benchmarked last month while running Android 8.0 Oreo. This particular model is expected to feature a 5.5-inch display with a resolution of 1,280 x 720, an Exynos 7885 chipset housing eight CPU cores and a Mali-G71 graphics chip, as well as 4GB of RAM and 32GB of on-board storage. It remains to be seen when Samsung might plan on releasing these new models in the Galaxy J series, but given the company’s naming scheme, it’s logical to assume that the Samsung Galaxy J6 will be positioned between the Galaxy J4 and Galaxy J8 in terms of both hardware and pricing. 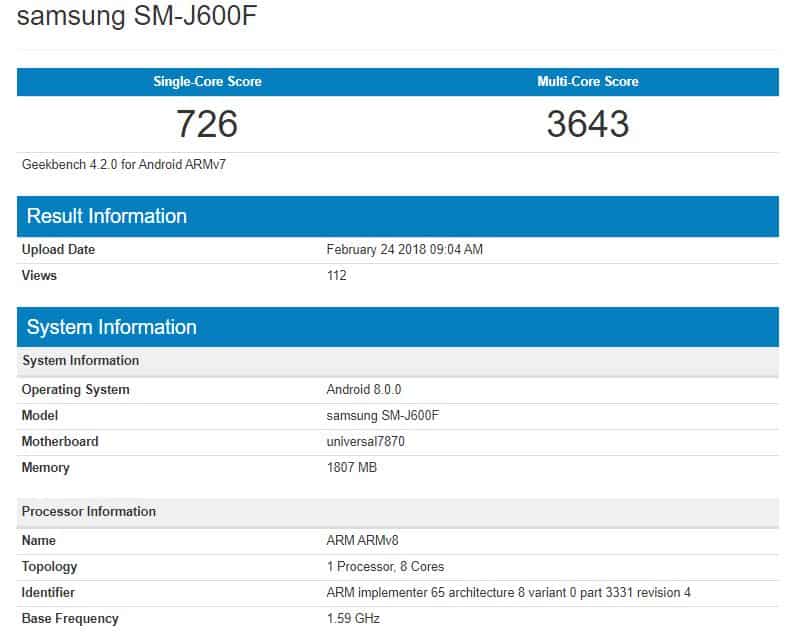