Samsung is seemingly developing a new smartphone in the Galaxy J series, as an unannounced device bearing the model number “SM-J400F” was recently spotted in the database of online benchmarking tool Geekbench. Judging by the model number, the device could hit the market under the name of Samsung Galaxy J4, and reportedly be a direct sequel to last year’s Galaxy J3. As a reminder, the global variant of the previously launched handset carries the model number “SM-J330F,” whereas the Galaxy J2 (2017) is known as the “SM-J200G” in select markets like India. Having said that, it’s only logical to assume that the SM-J400F spotted in Geekbench’s results library will eventually launch as the Samsung Galaxy J4.

Although Geekbench doesn’t reveal much about the smartphone’s hardware specifications, the benchmarking tool does confirm that the device will be powered by Samsung’s own Exynos 7570 chipset paired with 2GB of RAM, not unlike the Galaxy J3 (2017). The Exynos 7570 features four ARM Cortex-A53 CPU cores clocked at up to 1.4GHz, along with the ARM Mali-T720 MP2 graphics chip. Their similarities end when it comes to software, as the upcoming model runs the newer Android 8.0 Oreo out of the box as opposed to relying on Android 7.0 Nougat. No other specifications were revealed but the Galaxy J4 will possibly feature a new design and may offer other upgrades over last year’s Galaxy J3, including an improved camera setup and a better battery.

Officially, there’s no word on when Samsung might plan to release the Galaxy J4, and the company’s current main focus seems to be set on the launch of its next flagship series – the Galaxy S9 – which is expected to be showcased at Mobile World Congress 2018 on February 25. But of course, the Galaxy J4 will fit in an entirely different category as the “J” label is usually reserved by the OEM for its budget devices. Samsung’s latest model in the J series is the Galaxy J2 Pro (2018) which was introduced last month, featuring the Snapdragon 425 chipset as opposed to an Exynos-branded silicon, and running Android 7.1 Nougat. Meanwhile, the Galaxy J3 (2017) that’s likely to be succeeded by the newly spotted handset debuted last July, so the Galaxy J4 may be at least several more months away from its official announcement. 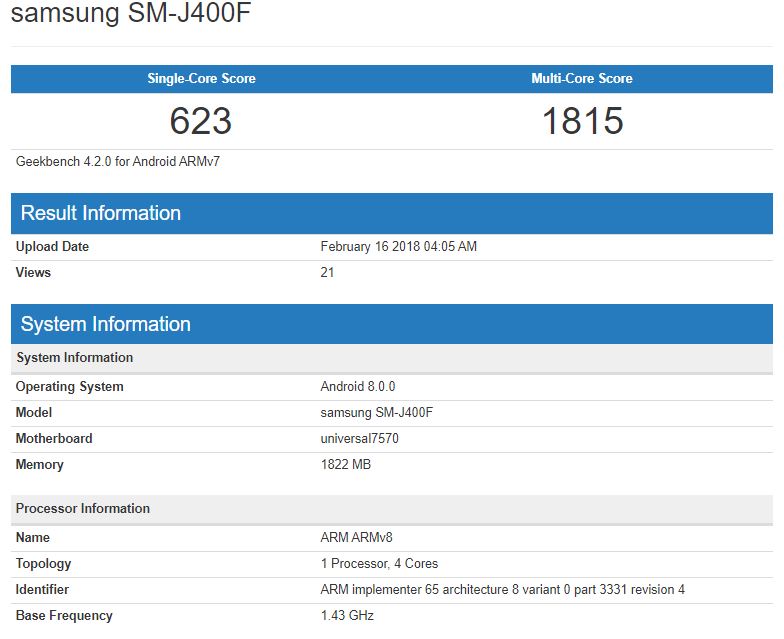