Flipkart confirmed that the Xiaomi Redmi Note 5 will be launching in India tomorrow, and now the Redmi Note 5 Pro spec sheet has surfaced as well, along with a render of the device itself. The Redmi Note 5 Pro was mentioned in yesterday's leak as well, some of its specs have, that is, and now we get to look at the phone's full spec sheet, actually, as you can see in the provided image down below.

Let's take a look at the phone's design first, though. As you can see, the device sports a vertically-aligned dual camera setup on the back, a dual camera setup that actually resembles the one on the iPhone X, as an LED flash is placed in-between the two cameras on the back. Four Redmi Note 5 Pro color variants are pictured in this image, Blue, Pink, Gold and Black models. We don't really get to see how thin the bezels are on the device, as it sports a really black wallpaper, and this image is not exactly the largest or the sharpest, but it seems like there's some bezel included above and below the display, and it seems like those bezels are thicker than the ones on the Redmi 5 Plus, but we cannot know for sure. The phone seems to be made out of metal, while there's a fingerprint scanner included on the device's back side.

Now, if the leaked info is to be believed, the Redmi Note 5 Pro will be fueled by the Snapdragon 636 64-bit octa-core processor, while it will ship with a 4,000mAh non-removable battery. The device will include 12 (1.25um pixel size, f/2.2 aperture) and 5-megapixel (1.12um pixel size, f/2.0 aperture) snappers on the back, while a single 20-megapixel camera (Sony's IMX376 sensor) will be placed on the phone's front side. A 5.99-inch fullHD+ (2160 x 1080) display will also be a part of the package, while the phone will arrive in 3GB, 4GB and 6GB RAM variants. The 3GB RAM variant will ship with 32GB of native storage, while the other two will include 64GB of internal storage. Android Nougat is listed as the OS on the Redmi Note 5 Pro, while MIUI 9 will ship installed on top of Google's operating system. The device will measure 158.6 x 75.4 x 8.05mm, while it will weigh 181 grams. 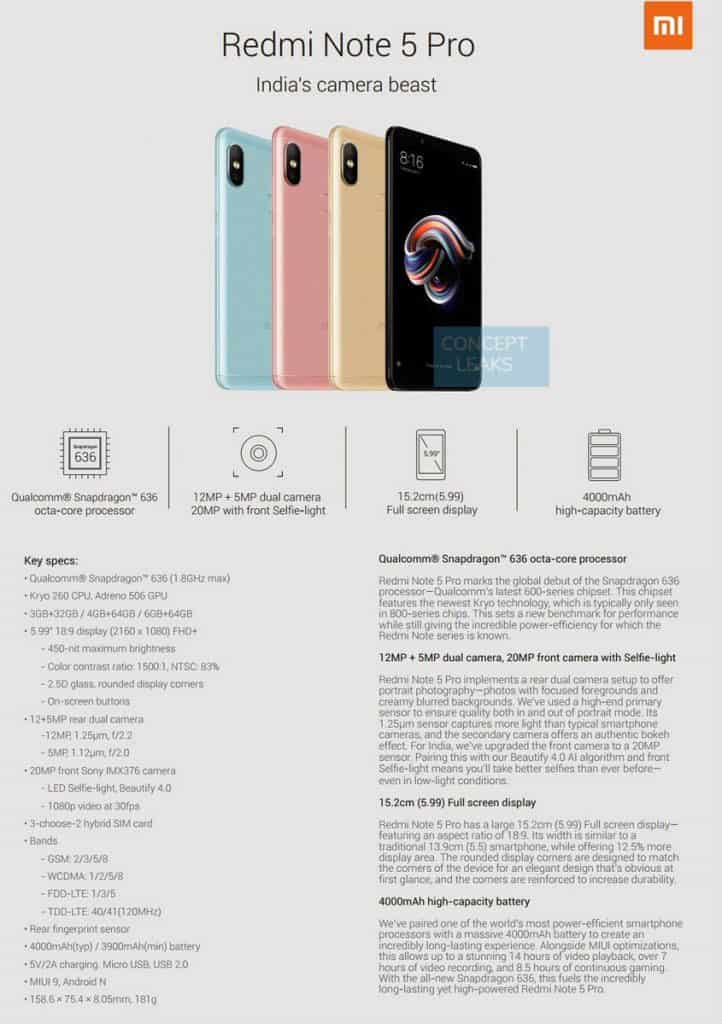